Welcome to yet another feature here at Enuffa.com - Helluva Band!  Each entry in this series will dissect the career of a specific band (or artist), while also covering the author's (sometimes it'll be me, sometimes not) introduction to the band, and his/her history as a fan.

For this edition I've chosen to spotlight prog/sludge/alt-metal band Mastodon.


This unusual band from Atlanta are known for non-traditional song structures, odd-time signatures, dazzling arpeggiated guitar riffs, astonishing jazz-influenced drum parts, and stylistically diverse vocals ranging from throaty barbaric screaming to clean melodic singing.  Three of the four members share vocal duties - bassist Troy Sanders has historically been the primary vocalist along with guitarist Brent Hinds, but on recent albums drummer Brann Dailor has taken up some of the slack as well (guitarist Bill Kelliher has only sung lead on one bonus track thus far), which has enhanced the diversity of their sound.

I first became aware of Mastodon in 2007, when a buddy of mine (hey Mike!), an avid metal fan like myself, highly recommended them.  I had heard the name before but knew nothing of their sound.  This was at a time when I had grown really tired of all the music I owned and was actively looking for new bands and artists to listen to (a few months later I got my first iPod and my musical tastes began to broaden exponentially).  After looking the band up on Wikipedia I was intrigued by the description of their music and the thematic elements of each of their albums, and decided to purchase Leviathan and Blood Mountain (the former had won all kinds of accolades from various metal magazines).


Blood Mountain was the first album I listened to, and I'd be lying if I said I was immediately blown away.  The overall sound was a little different than I expected (I figured there would be more of a nu-metal influence, with sludgy, detuned guitar grooves and gruff but hooky vocal melodies), I had a hard time getting into the vocal style, and the music seemed overly busy and strangely unfocused.  There were definitely some songs that caught my attention, specifically "Sleeping Giant," "Colony of Birchmen," and "This Mortal Soil."  Other than that though, I wasn't terribly enthusiastic about the album.

I decided to give Leviathan a go, given how many awards it had won and how glowing all its reviews were.  I had even less love for that album and dismissed a lot of it as noise metal.


Let me interject a personal note here: I'm usually not that impressed with scream-based vocals.  In general they just don't do much for me.  And it's not that I'm "too much of a wuss," or "that's not music to me," I just feel like having screamed vocals all the time only serves to accomplish three things.  1) It robs the music of any dynamics if the intensity level is always on ten.  When every second of a song is MEGA INTENSE, then as a result, none of it is.  2) I'd liken it to watching a movie that's wall-to-wall special effects/action.  When the vocalist simply uses the Insert-Screamed-Vocal-Here approach, they are no longer making an artistic choice, but plugging in the standard vocal part (it would be like every song having the exact same melody).  3) It makes all the songs blur into each other when there are no melodies to differentiate them.  Don't get me wrong, there are exceptions such as Slayer, where the music is so utterly visceral that style can work, and when tempered with actual melody, a la Slipknot or KoRn, the screaming vocal can add some real power to a song.  But it drives me nuts when metal fans cry foul because a band known for screamed vocals changes gears and introduces melodic vocals into the mix.  As if somehow the band has become a buncha pussies because they started writing melody.  It's absurd.

Anyway, based on those two albums I really struggled to fully appreciate Mastodon (believe me I badly wanted to, having spent 25 bucks on those CDs).  So I put them on the shelf for a while, only occasionally giving a handful of songs a listen from time to time.

Fast forward to 2009 and I read that Mastodon's new album, Crack the Skye, would be a more melodic prog-rock album.  This sounded interesting but I didn't end up checking it out.

Fast forward again to 2012, and I was once again in a spot where I desperately needed some new music to listen to.  I got my hands on a copy of Mastodon's latest album The Hunter, and it was this record that fully converted me.  The songwriting was more focused (some would complain it was too commercial-sounding, but eff them), each track stood out from the others stylistically, and all three vocalists got plenty of time in the spotlight, sometimes breaking out two- and three-part harmonies (for which I must confess a huge weakness).  The Hunter is Mastodon's magnum opus as far as I'm concerned.  Just a great, eclectic assemblage of songs.  The standouts for me include "Stargasm," "Octopus Has No Friends" (insane guitar parts in this song), "Dry Bone Valley," "Bedazzled Fingernails," and "The Sparrow" (this one reminds me of The Beatles song "Because").


From there I decided to go back and give the rest of their catalog another chance.

Crack the Skye was first on the list.  It features only seven songs, two of which are well over ten minutes.  The album has a much more ethereal, trippy quality than the others.  This is probably the least "metal" of their catalog thus far.  I liked it pretty well, though not on the level of The Hunter.  But the opening track "Oblivion" is my favorite Mastodon song to date.  The songwriting is fantastic, the chorus is memorable without being overly "accessible," and it's got just the right mix of heaviness and melody.  The other standout on this record is the title track, written primarily by Brann Dailor about his sister who committed suicide in her teens (her name was Skye).  This is a perfect example of screamed vocals being used effectively (Neurosis frontman Scott Kelly provides brilliantly sandpapery verse growls).  The aggressive gutteral verse sections give way to a mournful chorus hook from Dailor.


Next up was to give Blood Mountain another day in court.  Somehow this album clicked for me this time.  Besides the aforementioned triumvirate of songs I enjoyed years earlier, I came to really dig songs like "The Wolf is Loose," with its breakneck pace and multi-sectioned structure, "Capillarian Crest," with its dizzying time changes and light-speed shredding riffs, and "Bladecatcher," an instrumental featuring jazzy grooves and atypical guitar harmonies.

It was now time to revisit the much-maligned-by-me Leviathan.  Initially I could not understand why this album was considered such a masterpiece.  Upon further listens, while it's still not my favorite of theirs, I did finally gain an appreciation for this Moby Dick-inspired album.  The first track "Blood and Thunder" is a great, high energy opener, "Naked Burn" has one of the coolest and most innovative guitar intro riffs I've heard in a long time, and the epic thirteen-minute "Hearts Alive" builds to a second half full of amazing arpeggiated guitar parts, climaxing in an extended guitar burn that conjures images of the band rocking out while the world begins to crumble and disintegrate around them.

Finally I gave Mastodon's debut album Remission a gander.  This album sort of encapsulates what I originally expected them to sound like.  Remission is much more of a nu-metal album, and with the exception of a few standouts ("March of the Fire Ants," "Ol'e Nessie," and "Elephant Man"), this is ironically my least favorite of theirs.


On June 24th, 2014, Mastodon released their sixth album, Once More 'Round the Sun.  This one more or less stylistically continues where The Hunter left off, though it lacks its predecessor's diversity and trove of memorable tunes.  The standouts are the irresistibly hooky "Motherload," and the awesome "Asleep in the Deep" which features multi-layered call-and-answer vocals in the chorus.


The three singers in the band all bring very different things to the table.  Troy Sanders' voice has boorish quality, bringing to mind the howl of a medieval warrior.  Brent Hinds' slightly nasal yarl reminds me a lot of Ozzy Osbourne, and Brann Dailor with his clean, faint vibrato, to me is the best singer of the bunch.  Were it not for his tremendous skills as a drummer I'd suggest making him the primary vocalist.  The wholesomeness of his voice creates a compelling contrast with the grittiness of the music, in the same vein as Joshua Homme of Queens of the Stone Age.

Though it's taken me several years and multiple listens to unearth my admiration for Mastodon, they have earned a place in my pantheon of great metal bands.  This is one of the most creative, complex, and unique bands to come along in years, at a time where finding new things to do in music is as difficult a task as it's ever been.  Unlike most of today's metal bands you can't immediately identify who Mastodon's influences are.  They've created a style all their own, which is quite a remarkable accomplishment.  Their music is decidedly an acquired taste, but as is usually the case with great music, their work gains value with familiarity.  I look forward to hearing them continue to stretch their boundaries and defy genre conventions. 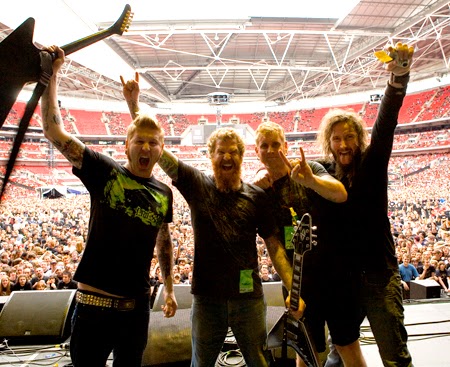 UPDATE: Mastodon's seventh album Emperor of Sand in 2017 marked a return to the concept album - this time the story arc concerns a man condemned to death by a desert Sultan, a metaphor for dying of cancer.  The songwriting on this one is streamlined and efficient, and the vocals arguably the strongest in the band's catalog; there is no shortage of memorable tunes to be found here.  My favorites are the Brann Daillor-helmed "Steambreather," the QOTSA-esque "Show Yourself," and the emotionally charged "Ancient Kingdom."  I'll be posting a full review soon, but suffice it to say Emperor of Sand is for me one of Mastodon's most accomplished works to date.

That'll do it for now.  Check back here at Enuffa.com for more installments of Helluva Band!  I'll be bringing in some guest writers to assist.
Posted by Justin Enuffa Ballard at 2:11 PM