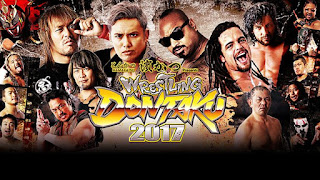 I think Gedo's finally lost his crackers with this one.

While definitely viable with the depth of their roster, spreading seven title matches out over three events is going to make for a crazy week. It would be equally crazy for me to try and preview every individual event that has a title match on it. So I'm going to be cutting what I look at down to the matches that New Japan deems important. Namely, the matches they've chosen to showcase on their video packages that play before the Road To Wrestling Dontaku events. Let's get started.

I'm not surprised that the Jr. Tag title match is on the Road To show. As hot as Takahashi has made the Jr. Heavyweight title lately, Taichi and Kanemaru have cooled the tag titles off. That's nothing personal, just that between schmozz finishes and Taichi being generally hated for all the wrong reasons, there's just no interest for the tag titles. Roppongi Vice has spent all the time since losing their belts trashing the champions, and a loss here would look bad on the former champs

Landon's Pick: RPG Vice. Normally, I'm not one to endorse short title reigns, but seriously Suzuki-Gun is death for these titles.
Justin's Pick: RPG needs to win the belts back. 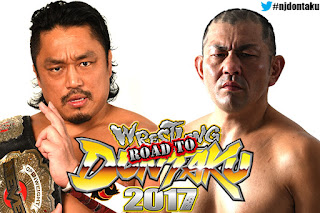 This one should be fun. In what is Goto's toughest challenge for the NEVER Openweight Title yet, the champion goes against the baddest man in New Japan.This leads to an interesting crossroads in the life of the NEVER Openweight title itself. Either Goto defends the belt, and shuts every doubter of his reign down (and ties Masato Tanaka and Tomohiro Ishii for total defenses), or Minoru takes the belt to begin a reign with the title that could last till Wrestle Kingdom 13. This match certainly could shine as the main event of this show.

Landon's Pick: Goto defends. Suzuki shouldn't be going for the NEVER title anyway. But if Suzuki wins it it'll be an interesting time.
Justin's Pick: This should be brutal and awesome.  On one hand I agree Goto should retain and solidify himself as THE new NEVER Openweight guy.  But on the other hand Suzuki has yet to win a big match since returning.  Eh, maybe Suzuki wins the belt for a few months before dropping it back to Goto.

Every one of Takahashi's title defenses, and his initial title win, have been insane. This one against Ricochet may top them all. More than maybe every opponent so far except Dragon Lee, Ricochet will bring a reckless abandon to the match that will go great with Timebomb's stupid quick offense. What will be tested, however, is Hiromu's defensive play. This'll be the best chance he has to show how well he sells aerial offense, and counters it. While Dragon Lee gave him the chance to show this, he and Lee had been working together for nearly a year at that point. ricochet gives Takahashi a new opportunity to prove why he is the new Zod of the Juniors division.

Emanating from a first round match in the New Japan Cup, Tanahashi looks to avenge a loss to EVIL. What could be the biggest match of EVIL's career thus far, I think that he's going to be burning on all cylinders for this one. Tanahashi may as well, the past three months of multi-man matches seeming to have given the Ace the break he needs from the main event spotlight. A match that may eclipse the main event, EVIL has everything to prove on this big stage.

Landon's Pick: Tanahashi's going to get his win from the Cup back, though I expect him to give a lot of offense to EVIL in the process.
Justin's Pick: This should be a great resume-builder for Evil, win or lose.  Tanahashi does need a win since he's lost basically every big match since last fall.  The former Ace ekes this one out. 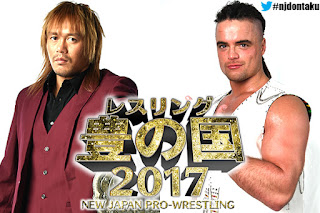 It's not that I don't like Juice, but I don't get why he's getting this match. Maybe it was supposed to be Shibata in this spot, and given the circumstances they had to pick somebody. The match still feels flat to me, but it should be good. Naito and Los Ingobernables de Japon remain the hottest group in the company, everything they touch is a grand slam. I'm really struggling to find things to say about this match.

Landon's Pick: Naito retains. Speculation can begin on who is the next challenger. (Taiguchi?)
Justin's Pick: Naito obviously retains, but this could be Juice's "coming out" party.

War Machine is champions. War Machine should be champions forever. We're moving into a program with Guerillas of Destiny chasing for the titles, and Tenkoji is really only in here due to Tenzan asking for one more shot. Should be an inoffensive match.

Landon's Pick: War Machine
Justin's Pick: This should be fun.  I wasn't very familiar with War Machine's work until their Title win last month and I'm quite impressed thus far.  Keep the belts on those guys for a looooong time.

I really don't mean to be short, but we've had a six-man or eight-man tag match with LIJ on every show, and there's been one successful title defense in the past four months. It doesn't really matter who comes out of this winning, something something fast paced match, something something LIJ is over.

Another rematch from the New Japan Cup, this match threatens to easily be the match of the night, and the match to beat for the entire tour. Their match at the New Japan Cup was phenomenal, and I believe that this one could be better than before if it's given the time.  I trust Kenny and Tomohiro to both want to deliver, and both want to be better than the main event. That drive may push this match over the top. Get your popcorn ready.

Landon's Pick: Omega, for momentum towards Dominion
Justin's Pick: This will easily smoke everything else on these three shows.  Yet another MOTY candidate.  Omega wins. 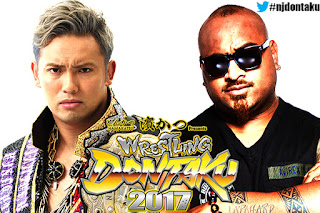 This is Fale's first Heavyweight championship match in his New Japan career, everyone can shut the fuck up about that, Seriously, the backlash I've heard has been near unanimous against it, saying "Stop giving him chances". One Number One contender's match and an IC title win (and near immediate loss) don't make for too many chances.

It isn't gonna be a five star match, but I'm convinced Okada can get at least a very good match out of Fale. The point is, with the rest of this card stacked, this doesn't have to be the be all end all best match on the card. The build up to Okada/Omega II starts in Dontaku, and it runs through Bad Luck Fale.

Landon's Pick: Okada. Christ help us if we get Fale as Champion.
Justin's Pick: Meh, I'm tired of Fale.  This may be his first IWGP Title shot but he strikes me as super irrelevant.  He's been mostly curtain jerking the past year and I find him pretty dull to watch.  Okada obviously retains.


This week is going to be coconuts. But it's gonna be a fun coconuts. Who will hold the championships of New Japan coming out of Dontaku? What will be set up for Dominion? Will anyone care about Cody and David Finley at Dontaku besides me? We'll find out.
Posted by Landon Wayne at 4:42 PM