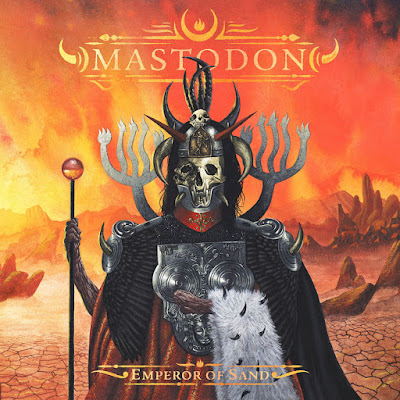 Prog-metal titans Mastodon are back with their seventh album, an ambitious, melodic, metaphorical journey called Emperor of Sand.  In the same vein as their trilogy of concept albums (Leviathan, Blood Mountain and Crack the Skye), Emperor contains an ongoing story arc, about a man cursed with a death sentence by an evil sultan.  The band chose this parable to explore the idea of a person dying from cancer, and the result is a thoughtful and thematic work, with a real focus on great songwriting.

Reunited with producer Brendan O'Brien (who helmed Crack the Skye in 2009), Mastodon largely breaks free of easy categorization on this album, presenting a hybrid of their signature frenetic drum patterns/arpeggiated guitars and a structurally stripped down, vocal-driven sound not unlike some of the material on 2011's The Hunter.  The three vocalists, Troy Sanders, Brent Hinds and Brann Daillor share lead duties more than ever before, trading off sections within the same song almost across the board.  This lends each track considerable textural variety and allows each singer to stretch his range; vocally this is the best Mastodon has ever sounded.

The album's 51-minute running time flies by, as the aforementioned Sanders, Hinds, Daillor and Bill Kelleher effortlessly pound out a dazzling flurry of hooky hard rockers. From the swinging triplet feel of the opening track "Sultan's Curse" to the Queens of the Stone Age-esque single "Show Yourself," to the stuttery slow-groover "Steambreather" (my personal favorite), to the emotionally anthemic "Ancient Kingdom," the band has assembled an amazing stretch of memorable, instrumentally agile tunes.  For me the album only falters briefly with the 10th track "Scorpion Breath," a noisy, one-dimensional nod to Mastodon's early work that feels out of place here.  But the disc closes strong with "Jaguar God," a multi-section 8-minute epic that gradually increases in intensity, from somber acoustic waltz to driving metal dirge.

Emperor of Sand shows a confident quartet pushing their boundaries again, after the somewhat safe but admirable effort of Once More 'Round the Sun.  I'd actually like to hear them go full prog-rock without feeling pressured to include more traditional metal elements.  On this album it almost sounds like they've included a bit of that just so as not to alienate their older fans.  But for me this album is probably their second-best work after The Hunter; it's inspiring to hear Mastodon tackle a conceptual central theme once again with such vigor, via such robust songwriting.  Emperor of Sand includes some of the band's best material yet.