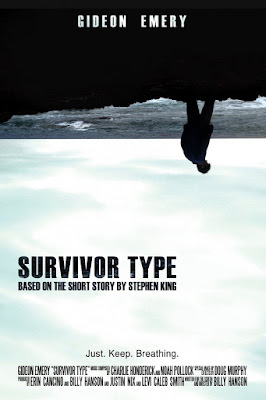 Four full years after I became aware of the film, I finally got a chance to see Billy Hanson's acclaimed Dollar Baby adaptation of Stephen King's "Survivor Type," the grotesquely disturbing short story of a disgraced surgeon who gets stranded on a miniscule island and goes to outrageously great lengths to survive.

Hanson debuted the film in 2012 at numerous horror film festivals and it generated considerable buzz, garnering multiple awards and unanimous praise from critics and fans alike.

Where King's story is presented as a written diary, Hanson translated the medium as a gritty, 30-minute "found footage" film.  The format plunges us directly into this ghastly tale, allowing the viewer to identify with this less-than-admirable character and his increasingly grim plight.  English character actor Gideon Emery delivers a stunning one-man-show performance as Dr. Richard Pine, showing us in short HD video snippets a man gradually losing his mind (and body) from hunger, desolation and drug use.

Anyone familiar with "Survivor Type" knows what happens next - Pine begins amputating and eating parts of his own body to stay alive, and his diary entries become more and more nonsensical and disjointed as the film hurtles toward the inevitable.  Hanson's approach to this material is simple and straightforward, allowing Emery's completely believable and realistic performance to take center stage.  As for the grisly details, Hanson shows just enough to make the audience shudder (and maybe dry-heave a little), but wisely leaves a lot of it to the imagination like the original story does.  The prosthetic effects are modestly presented but quite persuasive, and the makeup team does a tremendous job of making Emery look like a man who's literally withering away before our eyes.

All this would be for naught if the performance didn't work.  But it does, pretty spectacularly.  Gideon Emery compellingly brings across Pine's self-defeating hubris in the early scenes as he's certain he'll be rescued quickly, and later becomes palpably unhinged and hopeless after hacking off various parts of himself.  The most upsetting clips of course are the numerous ad hoc surgeries he performs, where Emery depicts not only unfathomable agony but also kind of a strange testosterone-fueled satisfaction in withstanding the pain.  By the end the character almost seems to be taking a masochistic pleasure in the amputations, spurred on by a growing dependence on his supply of heroin.  Emery's performance is naturalistic and fairly restrained given the extreme nature of the story, and he carries the film superbly.

Stephen King's ingeniously unsettling self-cannibalization yarn has been pretty flawlessly adapted here by Billy Hanson, in what has to be considered the definitive film version.  If you're a fan of traumatic horror films, and especially if you're a Stephen King devotee, you'll love "Survivor Type."  Just don't eat anything for about an hour beforehand....and you probably won't wanna eat much afterwards either.
Posted by Justin Enuffa Ballard at 2:41 PM