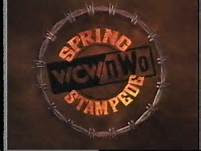 19 Years ago, the Monday Night Wars raged on. I was 4 years old when the WWF broke the ratings dominance WCW, 7 when WCW folded forever. The Attitude Era is remembered as such a mythical time, of tremendous TV and great PPVs. Revisionist history tells us that WCW was a sinking ship from around the split of the nWo and before, and that the WWF started their almighty comeback with Austin's title reign that started at Wrestlemania 14.

Conveniently, both of these happened in the spring of 1998, where I'm gonna pick up in the timeline. I'm not going to be reviewing the weekly Raw and Nitro shows, because I seriously don't have the time or patience for that shit. Instead, I'm going to pick up their slack, and cover the PPVs as they come down the pike. There's gonna be good, there's gonna be bad. May Macho Man have mercy on my soul. 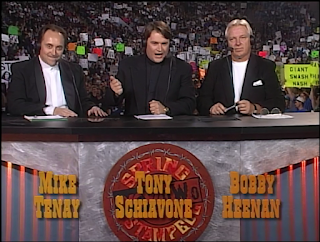 6 Days ago, WWF beat WCW in the ratings war for the first time in 84 weeks. 20 minute Hogan promos dominate the program's pime time, and an undercard struggle for attention by putting on great matches that go ignored by the people in power. That is the stage set for April in 1998.
The opening package focused entirely on the nWo, only a passing mention of Sting, the World Champion. The Wolfpac split is coming soon, and Nash and Hogan's interactions in the video say as much. There's a smattering of nWo shirts in the crowd, like Bullet Club shirts are in crowds today.

Schiavone, Tenay and Heenan are our commentary booth. They're generally unoffensive, and I generally like all three of them. Heenan does a good job on color, with Mike and Tony doing good play by play.


Goldberg vs. Saturn
Goldberg was ridiculously popular. The crowd went wild when his music came on. He was labeled as 73-0, and the Number One contender for the United States Title. Almost immediately, he almost kills Saturn with a Pumphandle Fallaway. He certainly had an explosive style that was entertaining as hell. Not to take away from Perry Saturn, who had a very unique and fun to watch style. Goldberg threw Saturn around like a cruiserweight, the rest of the Flock interfered. Goldberg murdered Kidman with a spear. Golberg stood through the Rings of Saturn, and hit a Jackhammer from a Fireman's Carry. Goldberg was stupid strong, and stupid awesome. A really fun opener.

Meltzer's Rating:*1/2
It was short, and smokey, but it was fun regardless. 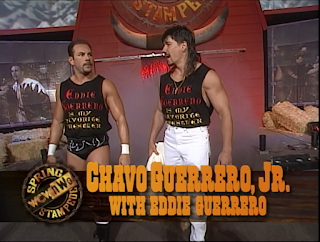 "Eddie Guerrero is my Favorite Wrestler" is a shirt I'd buy instantly if they sold it again somewhere. The Best of the Super Juniors is coming up, and this PPV is a good warm up for that. There's a man in the front row with a whiteboard, one of my favorite gimmicks to bring to indy shows. Active commentary through the show from Whiteboard man. The two in the ring were very technically sound in a fact paced match, slowing down just enough to get the crowd to breath. Eddie manages to still be the most entertaining part of the match, with his sweet mullet and comments into the camera on the outside. Dragon won with a Dragon Sleeper, in a very good match. ultra competitive is the description by Tony. Still want the Shirt.

Meltzer Rating:****
It was a great match. Everything went right, practically no beats were missed. Would definitely go and watch it. 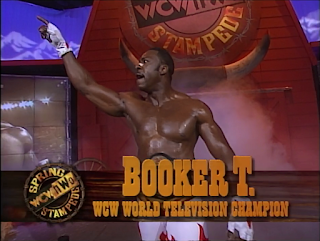 Booker T vs Chris Benoit for the WCW World Television Championship
This is the first new Benoit match I've seen since June of 2007. I've gone back and rewatched matches (Angle/Benoit, Benoit/Jericho), but this is the first brand new match. He was a very intense and crisp moving individual. He wasted no movement, and everything he did expanded the in ring story. Booker T himself was very good at the time as well. Harlem Heat had only been split for less than a year, but Booker was already looking very comfortable in the ring. If Schiavone doesn't shut up about the thin air in Colorado I'm going to scream. Benoit did a flying headbutt for a near fall, which was uncomfortable to watch. Another guy in the fifth row with a whiteboard. Why did this stop being a thing? The finish of the match was just convoluted enough to be entertaining, and still pretty logical. A fun match, made both men look good.

Meltzer's Rating:***1/2
It was a very good match continuing the trend of WCW's undercard stealing every show. The history books at least get that right.


Davey Boy Smith vs. Curt Hennig
First nWo theme for the night. Rick Rude doesn't have his mustache, but you can't have it all. Rude had to be hand-cuffed to Jim Neidhart and it took forever with Rick stalling. The match was boring, Smith taking most of it. Neidhart was a moron and got distracted long enough for Rude to get uncuffed. Hennig got the win by hitting Smith's head on the turnbuckle connector. Later we realize the cop Neidhart was distracted by was Vincent, of the nWo.

Meltzer's Rating:DUD
The Fuck was this? 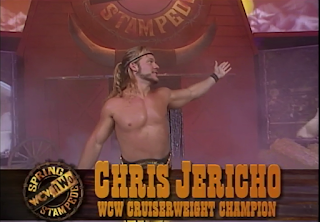 Chris Jericho vs Prince Iaukea for the WCW Cruiserweight Championship

They removed the Even Flow knockoff for Jericho and replaced it with his WWE theme. Jericho was certainly the star of the match, and you can clearly tell that the man truly didn't care. Iaukea was a good opponent for Jericho's personality to wrestle around. Chris's personality really broke through both before and during the match. A fun match to watch, both men putting just enough effort in to get the crowd going. If one more person mentions the fucking altitude I'm muting the TV. Jericho finally got the Liontamer after trying twice before.

Meltzer's Rating: ***1/4
Not as good as Guerrero and Dragon, but still an entertaining match to watch.


Scott Steiner and Buff Bagwell vs Rick Steiner and Lex Luger
We've had great wrestling on this show, and yet it's only the nWo chuckleheads that get mic time, both on Nitro and on the PPVs. There was a deal where Buff tried to get out of the match with a bad hand, which was proven to be fake in a painful 4 minute skit. You can tell that Schiavone at least is being fed lines to make sure the nWo sounds dominant and strong in the grand scheme. How is it that Scott Steiner could be in this business for more than 5 years and still be awkward and in the way? Heat on Rick for forever, before Luger came in to an insane reaction. Luger got he Torture Rack, and it was over.

Meltzer's Rating:*1/4
It was a match. Short, relatively inoffensive.


La Parka vs. Psicosis
Several times during this match, it seemed to be almost on the edge of catastrophe. But, such is lucha, and the pair ended up hitting all their spots well at the end of the match. The crowd was, unfortunately, having nothing of it and it killed the match dead. With an active crowd this match probably would have been much better. As it was I was begging for it to end. Psicosis won with the Psycho Guillotine.

Meltzer Rating:**1/2
Maybe as high as ***1/2 if it were replicated in a better environment. But I was forcing myself to get into it.


Hollywood Hogan and Kevin Nash vs. Roddy Piper and the Giant, Bat Match
Russotastic before Russo. Roddy was just starting to get his gut in spring of 1998. The baseball bat is approx. 10 feet above the top turnbuckle. Piper had to shimmy up the pole, a sight I hope I never see again. Piper was an 80s character in the 90s, Hogan refused to not be over, Giant and Nash were plodding. Half way through, Giant was spanking Hogan and you could hear Heenan stop himself halfway from calling that Giant was pounding his ass. Who the fuck wanted to watch this? Hogan and Nash won. 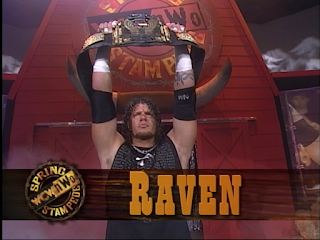 DDP vs. Raven for the WCW United States Championship
This was a fight that went hither, and it went yon. They creatively used a lot of the stage setup to their advantage. DDP jumped off a Stagecoach, Raven strangled DDP with a cowbell on a rope. This came off great on camera, but live it may have been lacking. It was clearly announced that the winner would face Goldberg tomorrow night. Who would want to I don't know. This match was completely different than any other on the card, and the two master storytellers in the match made it flow really well. The Flock interfered throughout the whole match, and it led to the finish as well. DDT on a kitchen sink to end the match

Meltzer Rating:****
It wasn't all that great, a lot of bullshit but not terrible. I don't regret watching it. Raven got killed by Goldberg the next night, by the by.


Sting vs. "Macho Man Randy Savage for the WCW World Heavyweight Championship
Elizabeth looks so tired. Sting's world title reign had been an afterthought throughout it's existence, and here it didn't change much. It'd be more exciting if we hadn't seen an arena wide brawl one match before. It was a good story, again from two guys who on their worst day have okay performances. I wish I could say more, but really all this match was was cheap brawling before a series of near falls. The World Heavyweight championship certainly feels like an afterthought when compared to the in fighting of the nWo at the time. Elizabeth took a Stinger Splash halfway through, before nWo shenanigans led to Sting getting pinned by Savage. Trash filled the ring, because fans hate being bullshitted.

Meltzer's Rating: **1/2
I was pretty burned out on nWo shenanigans at this point, so this did nothing for me. I can only imagine what people of the time were feeling.


Really, Spring Stampede is the story of everything history says WCW was; a really good undercard of entertaining matches, dragged down by nWo members cashing their checks and trying to have fun. The latter doesn't translate well, and that product ages poorly. The good stuff remains good today, and is definitely worth going back and checking out.

(All Meltzer Ratings taken from the 4/26/98 issue of the Wrestling Observer.)
Posted by Landon Wayne at 1:51 PM