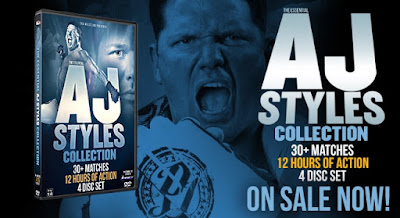 AJ Styles is probably my favorite, all-time favorite wrestler. Yes, more than Ishii, Silas Young, or even Harley Race. So getting the four disc Essential Collection of his best matches in TNA has always been on my radar. I know that TNA's beginnings were less than stellar...and some of the middle...and...and I mean 2012 was really good...But AJ Styles, even back in 2007 when I started watching TNA, had talent that rose above the schlock. So as I put in disc 1 of the set, a group of matches I've never seen before, I thought surely, SURELY, this applied throughout the earlier days.

June 19th, 2002
AJ Styles, Low Ki, and Jerry Lynn vs The Flying Elvises (Jorge Estrada, Jimmy Yang, and Sonny Siaki)
Ho boy...I guess this match is on here more for profiling purposes. It was the first official match on TNA's first show. Really, the only way I can describe it is thus;
Move.
Move Move.
Move Move Move Dive Move.
Dive Dive Dive.
Move.
There's no real reason to watch this match beyond historical reasons. Plus, the Elvises won.


June 26th, 2002
AJ Styles vs Psicosis vs. Low Ki vs. Jerry Lynn, Double elimination match for the X-Division Championship
This should have been the first match on the collection. There was constant movement and action, with a series of singles falls eventually boiling the match down to AJ Styles and Jerry Lynn within the first 10 minutes. It set AJ up as strong champion (spoilers, he wins), but also makes Jerry Lynn look really good by dominating through much of the match. It's clear to anyone that young Styles as a lot of potential that they could tap into. Unfortunately, the X-Division would go on to be treated like the undercard of WCW's day, and many of the fantastic wrestlers of the division would never get a chance in the main event. But, this isn't the place for that bitter debate.

Lynn vs. Styles was a very good match-up.


May 28th, 2003
CM Punk and Jason Cross vs. AJ Styles and D'Lo Brown
We see the foundations of the iconic AJ Styles in this match; like the entrance jacket, and the first iteration of his iconic theme. Seeing circa 2003 CM Punk is honestly surreal, and he shows the glimmers of the greatness he'd be one day as well. I feel like the match was included more to add story to the upcoming match, setting up the idea that Jarrett is afraid to defend his title against Styles and make AJ look good through the match at the same time.

A short, inoffensive match, with a pile of really cool double moves from Pnk and Cross. I would have preferred a singles match between Punk and AJ Styles, but I don't know if it ever happened in TNA.


June 11th, 2003
AJ Styles vs. Raven vs. Jeff Jarrett for the NWA Heavyweight Championship
Say what you will about Jeff Jarrett (and I will be saying a lot), but the man had an awesome theme in TNA. I don't want to make accusations, but I think company owner Jeff Jarrett did everything he could to make himself look strong. I know, shock. The individual styles of each man are showcased really well in the match, with the high flying, brawling, and southern Wrassling coming together just fine. About halfway through, Raven took an unprotected chair shot from Styles strait to his face that cut him open hard. The title match was going really well, for what it was.

So Raven had the pinfall on Jarrett after a DDT, when Shane Douglas pulls him out of the ring, beats the piss out of him, keeps beating him towards a door, and out of the arena. Stupid, but it was an alright excuse. I'm sure they had a bloated, plodding no-DQ match somewhere down the road. So it's one on one in the ring, and immediately we get Jarretttastic. AJ clonks him with the title, kick out. Springboad 450, countered. Caught out of mid-air and powerbombed, kick out. Shot, kick out. Stabbed in the arm by a crazy woman, kick out. Jeff breaks his leg jumping from the top rope for a big boot, kicks out with the bad leg. Whole time, Don West and Mike Tenay are going on about how great Jeff has been as a fighting champion.

Vince Russo comes out, teases hitting AJ with a guitar, and hits Jeff instead, cause ITS GOTTA BE A SWERVE BRO. And when AJ gets the pin with the Styles clash, Russo immediately starts kissing and cradling the belt as if he won it.

Fuck this company. If I had Billy Corgan's money, I would have bought it to kill it.

Fine match if you stop 10 minutes in. 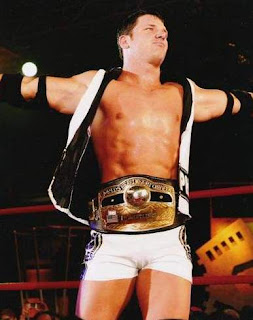 April 21st 2004
Jeff Jarrett vs. AJ Styles Steel Cage Match for the NWA Heavyweight Championship
Less than a year later, Jarrett had the title again (for six months as Tenay noted, which means he regained the title four months after losing it.) This was a very good, traditional Steel Cage match. Jeff wanted to be the traditional Southern Heel all his career, and I'll give him credit that he doesn't do it half bad. They used the cage well, and the psychology was all there. AJ played the sympathetic babyface and did all he could to get the crowd into it. A very good World Title Cage match.

So Styles hit the Styles Clash, and Jarrett kicked out. Fine, main event cage match, whatever. AJ begins to scale the cage, and makes it to the top. Jarrett manages to force AJ to fall from the top to the cage, and tumble to the floor. This is not the finish, since there must be a pinfall in this cage match (Fucking what). AJ's splatted corpse is pulled into the ring, while Jeff gets his guitar, But here comes Russo, who tries to get his Brooklyn ass to scale the cage, which doesn't work out. But it bought enough time for AJ to DESTROY JEFF'S GUITAR WITH A PELE, which was actually an awesome image, and won with a crucifix pin. And for the second time on one disc, I have to see Vince Russo holding the NWA Heavyweight title like he won it.

Again, the match was fine before the bullshit. Stop watching after the first Styles Clash.


June 23rd, 2004
AJ Styles vs. Jeff Hardy for the X-Division Championship
And then two months later, AJ's a completely different champion in a completely different Division. The first match with the 6-sided ring, this was Jeff Hardy's debut in TNA. This was shaping up to be one of the better matches on the disc. Both men slowed their usual paces down a bit. You can see AJ progressively getting smarter with his work at this point. Or maybe he's phoning it in and I'm ignorant. Who cares, because just as the match is reaching it's climax, Kid Kash and Dallas (Lance Archer of New Japan) ran in for the interference.

This has to be a joke, right? This collection has to be a joke on AJ (who at this point must either not care or not know this collection exists). The worst part is, I know that it isn't a joke, that it was made with legitimate intentions in mind. Was there a mandate that this had to be four discs?


August 18th, 2004
AJ Styles vs Kid Kash, Street Fight
It's small, but I give extreme props to both men for coming out in jeans, shirts and taped fists. Cause it's a street fight, and you shouldn't be wearing your regular gear for a brawl like this. And it was actually a really fun brawl to watch. They took it all over the arena, and the arsenals they used were appropriately limited. Entirely strikes, throwing each other into things, and the occasional DDT or simple slam. Eventually, after falling off the balcony through a table (I was actually terrified they'd stop the match there and I would have been livid), AJ brawled Kash back towards the ring where the fight transitioned into a regular match with finish attempts and more 'moves'. The ending was clever and well done, with a not entirely flash roll-up from AJ. This was definitely one of the better matches on the disc, surprisingly it was one of the only ones that didn't involve bullshit.


Final Resolution, January 16th, 2005
AJ Styles vs Chris Sabin vs Petey Williams, Ultimate X Match for the X-Division Championship
Another solid match on the DVD. Apparently I didn't enjoy this as much as Dave Meltzer at the time, or the general consensus even today. It was a very good performance, but I'm past the point in my wrestling taste where spot fests like Ultimate X entertain me too greatly. All three men do what they can to get the seriousness and sacrifice of the match over, with all three men spending time down and in pain. I prefer Ultimate X with the Steel beams, it looks much safer and easier to pull off. The finish was unique, with AJ springboarding off the top rope to grab the title out of William's and Sabin's hands. A cluster, but an entertaining cluster. Watch for the finish.


Lockdown, April 24th, 2005
AJ Styles vs Abyss, Number 1 Cntenders Cage match for the NWA HW Championship
If you asked me who the Ace of TNA was, I'd say AJ Styles. But, if you wanted me to list a top 3 or top 5 of TNA, all time, Abyss would certainly be number two or three on the list. One day I do hope they make an Abyss collection so I can watch it and be in a constant state of "HAAOOOOOOOOWWWW" for three hours. TNA's resident Big Man spent roughly the first half killing AJ dead in a practically one sided fight outside of the cage, bloodying him up really well in the process. The rest of the match was a very good Big Man/Little Man fight, with AJ trying everything to put Abyss away. Eventually, after a Styles Clash into tacks failed (Yeah I know, stupid), and a near repeat of AJ falling to his near death once again off the cage top, AJ eventually Sunset Flip Powerbombed Abyss into the tacks again, securing the fall. This was a very fun match. I do feel like the initial outside brawling did go on a little too long, but it had a purpose and lead towards bigger things further in the match.


Well, that was the first disc.

What the fuck was that?

I mean when it was good, it was very good. The 4 man match for the first ever X-Division Champion, the brawl with Kash, and the final match on the disc against Abyss were all quality. But the bad stuff was some of the stupidest finishes/angles I've ever seen. If I didn't know that it got better from here, I'd be a lot more mad about all of this. But it does get better. Much better. 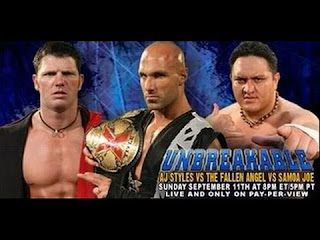