Welcome to another Top Ten Things, here at Enuffa.com, where I count down the ten best or worst things I'm thinking about!

What's on my mind this week?  Why it's the Ladder Match, which was created in the late 1970s in Stu Hart's Stampede Wrestling, brought to the WWF by Bret Hart in 1992, and revolutionized by Shawn Michaels at WrestleMania X.  Since then the Ladder Match has been a perennial stuntfest utilized to crown Champions, elevate new stars, and test the limits to which a wrestler can push his body.  For the purposes of this piece I'm disqualifying TLC matches since they technically aren't the same thing, and there would be way too many of them on this list.  I'm also eschewing the Money in the Bank match, as most of those kinda blur together for me now.  There's very little else that can be done with the multi-man Ladder Match, sadly.  Might be time to put a moratorium on those for now.  Anyway, these are the ten best standard Ladder Matches, in my opinion. 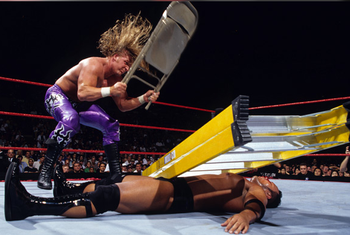 After the template had been set in 1994, The Rock and Triple H attempted to redefine this gimmick match as more of a no-nonsense brawl that happened to feature a climbing implement.  These two rising stars would feud on and off for the next two years, but this is the match that really catapulted both to the next level.  While not a gasp-inducing spotfest like the two HBK-Razor matches, this one featured gritty, hard-hitting action, some outside interference, and a nuclear crowd who cheered for the heel Rock just as much as for the babyface Triple H.  In fact this match led to a brief face turn for Rocky, before he swerved everyone and joined Mr. McMahon's Corporation. 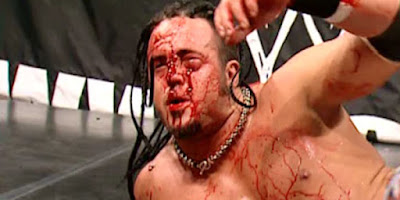 This multi-car pileup of a wrestling match was probably the closest the company would ever come again to the TLC series from 2000-01.  Three of the teams involved were known for high-flying antics, while the fourth was comprised of two down and dirty ground grapplers.  The only word to describe this match is "chaos."  But in a good way.  This one will always be remembered as "That time Joey Mercury lost his face."  An errant see-saw ladder spot resulted in Mercury's nose exploding, leaving pools of blood all over the ring.  Just brutal.  But even outside of that unfortunate occurrence, this was a helluva match. 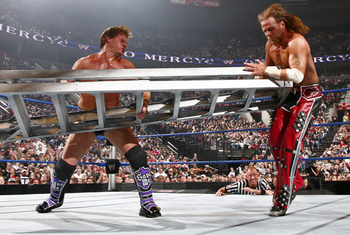 The 2008 Feud of the Year culminated in this epic war between World Champion Chris Jericho and his arch-rival Shawn Michaels.  These two had fought each other four times on PPV just that year, each match topping the last one, so what better way to cap off such a rivalry than with a Ladder Match?  Months earlier, Jericho had reinvented himself as an icy, soft-spoken villain with a holier-than-thou attitude, hell-bent on ending Shawn's career and exposing him as a hypocrite.  After 22 brutal minutes, Jericho finally earned a decisive PPV win over his greatest foe, in the match Shawn helped pioneer. 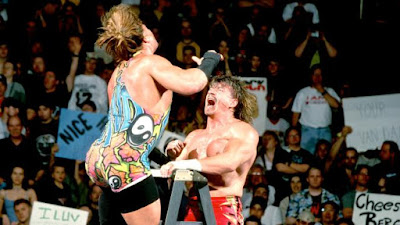 The RAW brand in 2002 was mostly a shambles, but every so often a match would light the show on fire, like this one did.  Guerrero had just returned from rehab a month earlier, now sporting a veritable mean streak.  After trading the I-C Title back and forth, Eddie and RVD ended their feud with a spectacular Ladder Match, notable not only for its breathtaking action, but for a misguided fan running into the ring to attack Eddie.  This was a rare highlight for the red brand, circa 2002. 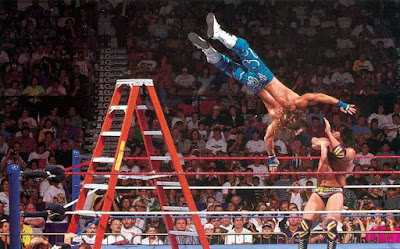 Originally scheduled to defend the Intercontinental Title against Sid Vicious, Shawn Michaels was reassigned by President Gorilla Monsoon to a Ladder rematch against Razor Ramon, the man with whom he helped define the Ladder Match 17 months earlier.  While not up to the legendary status of their first go-round, this is still a damn fine Ladder Match with memorable spots involving TWO ladders (In 1995 the idea of a second ladder being introduced was mind-blowing. No I'm serious.) and a different dynamic being that both guys were now babyfaces.  Instead of blatantly using the Ladder as a weapon, Shawn and Razor instead went for more heroic spots, such as Shawn's moonsault off the upper rungs. 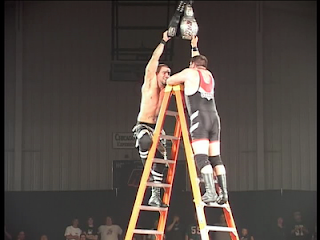 Ring of Honor's first foray into the Ladder Match took place on their third-ever PPV event, Man Up.  Dubbed a Ladder War, this match would settle the epic tag team feud between ROH Tag Champs The Briscoes and Kevin Steen & El Generico (better known these days as Kevin Owens and Sami Zayn).  This match was an epic demolition derby, with people being powerbombed and piledriven through the steel structures.  The match was so brutal in fact that ROH vowed at the time never to book another one like it (they broke their promise two years later at Glory By Honor VIII).  One of the more uncomfortably grueling variations on this wrestling staple. 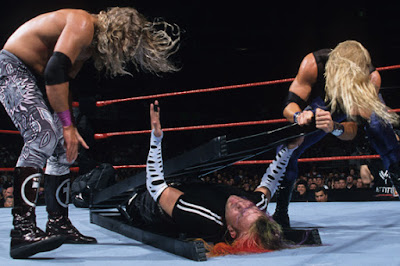 The predecessor to the TLC match, this was the first-ever tag team Ladder Match and featured some of the most incredibly audacious spots ever seen up to that point.  These four men went into the match as underdogs clawing for their place on the roster, and left as trend-setting cult heroes, having brutalized themselves and each other for the crowd's enjoyment.  This was just the beginning of one of the all-time great tag team rivalries. 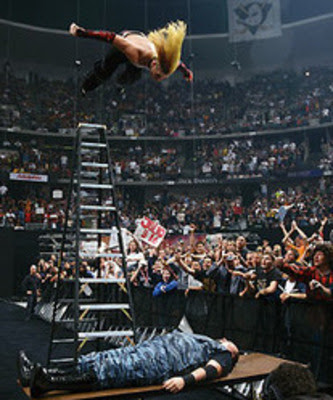 In 2000 the WWF was in the midst of a tag team renaissance, and these three teams rose to the top of the division, in no small part due to their performance here.  This match took what Shawn Michaels and Razor Ramon had done six years earlier and put the Ladder Match into overdrive.  The action was violent, explosive, and brutal, and 22 minutes later the TLC match was born.  Edge and Christian won the Titles and would soon invent the comedic heel personas that took them to the next level, the Dudley Boyz became synonymous with table spots, and the Hardy Boyz established themselves as fearless daredevils for the rest of their careers. 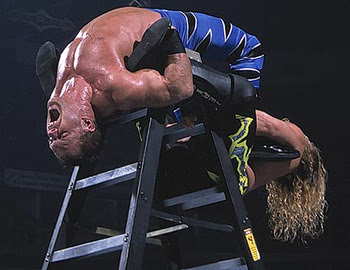 At the 2001 Rumble, I-C Champ Chris Benoit defended the strap in a Ladder Match against one of his greatest rivals, Chris Jericho.  These two delivered one of their best-ever bouts, creating inventive spots and establishing a gritty, realistic tone throughout.  Aside from a slightly anticlimactic finish, this was probably the best singles Ladder Match since HBK-Razor, and easily one of the best matches of 2001. 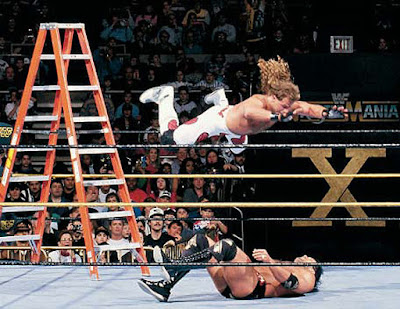 How could #1 be anything else?  The Ladder Match - Shawn Michaels vs. Razor Ramon for the undisputed Intercontinental Title.  An entire subgenre of professional wrestling was born during these 19 minutes.  Shawn and Razor began with an excellently worked traditional match, and at about the halfway point took stunt wrestling to a whole new place.  The spots here may seem tame to us now, but at the time this match was the goddamnedest thing I had ever seen.  Between Shawn's top-of-the-ladder splash, Razor suplexing Shawn off the top, Shawn jumping on the ladder and riding it down across Razor's body, HBK and Razor (and apparently Bret Hart as well) created the prototype for the Ladder Match, and basically every such match since owes it a debt.  In terms of defining the Spotfest, this might be the most important single match of the 1990s.


And there's my list.  What are you top ten Ladder Matches?  Let me know in the Comments section!