Welcome to a special Dive Bar Review, well outside my safety zone of New England. I'll be using a different rating system instead of the standard handlebar mustache for this special review.


The glitz and glamour of Las Vegas is a unique splendor. Ordinarily when you think of Sin City, you think of this majestic view: 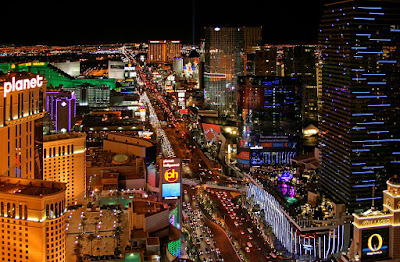 You typically wouldn't think of this lovely spot, hidden on a side street on the strip in between the Flamingo and Bally's: 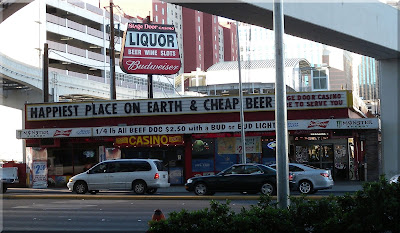 That right there, my friends, is The Stage Door Casino.  Located in what can only be described as an alleyway, this Mecca of debauchery is a beacon calling out to degenerates like myself.

After hitting the Bellagio all-you-can-eat buffet, losing some scratch at the craps table and hitting a few bars in between, it started to downpour on our walk along the strip. My friends and I were running for cover in the rain and saw this place hidden down the street. And it was one of the greatest discoveries of my life. The Stage Door is a two-room bar, one room is a legit convenience store while the other is the real deal bar.


Fun Factor: It's got TVs, chicks in small clothes serving dirt-cheap booze, and gambling. The place is a scumbag's DisneyLand (as long as Minnie Mouse is a strung out chain-smoker). I was watching sports, gambling on sports, drinking shots and playing video poker all at the same time. It was the happiest I've ever been. You bet your ass it gets a perfect four out of four Fat Elvises

Cast of Regulars: Man oh man the folk in this bar were amazing. From the blind girl hanging out with the legless guy to the bald chick eating hot peppers, I was enamored with them all. I plopped down on a stool next to a guy chain-smoking Marlboros and pounding Michelob Lights. He had a ponytail and was bald up top. He had maybe four teeth and wore a buncha gold chains. His name was Rex, and he had me at hello. So yea, again, four out of four

Beer Choices: They have just about every bottled beer under the sun and the place is dirt cheap. Their special as advertised is a hot dog and bottle of Budweiser for $2.50. You can't afford not to buy it. Sure, the hot dog tasted like reanimated roadkill, but it came with packets of chopped onions. ONIONS!

The other booze deals there are also amazing. $2 Jaeger shots, $3 Royal Crown, dollar PBRs, I mean it's a poor man's drinking paradise. My blackout gives it a perfect

Overall: I think it's obvious how much I fell in love with this place. It was a great reprieve from the $8 beers and $14 cocktails on the strip. Down-to-earth folk, some sweetheart bartenders and plenty of cheapo boozing options make this the perfect Vegas dive bar. Good night, Stage Door Casino. I'll see you soon. Miss you.

A PERFECT FOUR OUT OF FOUR CHUNKA CHUNKA BURNING LOVES