The Dive Bars of America: The Connection (South Boston, MA)

If you couldn’t tell by the title, this column is going to feature one of the many beautiful dive bars in and around Boston. I’m a purveyor of these places, as the dive bar is my preferred destination when rambling about town and taking in a few pops. So join us, won’t you, as we venture forth into this vast, delicious wilderness?

For these bars I’ll be writing about, I’ll be using a 5 category rating system which will be rated between 1 and 4 handlebar mustaches, which is the preferred mustache by 9 out of 10 old timers in dive bars. 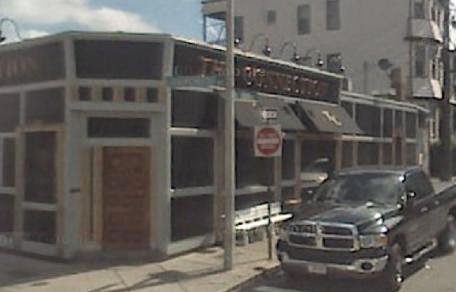 I must confess to leading off with a personal favorite of mine. I lived around the corner from this spot for about 5 years and this became the de facto base of operations for me and the morons I hang out with. It’s essentially a large room, with a rectangle shaped bar, a dance floor no one dances on, a kitchen no one uses, and women no one hits on.

Fun Factor:  There’s not much to do in this bar except sit and drink. There are two dartboards, a videogame machine, a jukebox and a buncha TVs all about the outlying areas and in the main bar section. That being said, there’s still plenty of fun to have in this joint. It’s the type of place to watch a game with loudmouths and sit there for hours. More than once I went to stop in for one or two beers, then BOOM its night time. Or I blacked out. Only the police know the true answer.

Cast of regulars:  The repeating clientele in this joint is PHEE-NOM-A-NOL. Unreal characters in this joint. There’s Mush Mouth, the belligerent drunk that speaks a language not of this Earth. Barney, a drunk man whose name we do not know, but looks just like Barney, the drunk man from the Simpsons. DAAAAAHLEEEEEEN (Darleen for non Southie speakers). And of course, Butter, the bartender. He’s like the sane doctor in this asylum. If you need to know which horse to bet in any given race, he’s your man.

Beer choices:  Not much happening in the beer dept. Tons of domestic choices, the usuals, Bud, Bud Light, Rolling Rock, etc. Drafts are limited as well, though the prices are dirt cheap, as they should be for a dive bar. $10 for a pitcher of Bud Light, & the house cheapo is a pint of PBR, which will set you back $2.

Stench:  All dive bars have a smell. It goes without saying. The sun rises in the east, sets in the west, and dive bars stink. Some worse than others. This one doesn’t have a bad odor to it. It’s got that “we’ve been here for decades and know nothing of fashionable décor” stink. So it’s a good one.

Overall:  As I said, I’m biased. I love this joint, and still go there to this day. Many dumb hours have spent there, yelling about the Sox, listening to Hall & Oates, and almost being late for a friend’s wedding because we were finishing off pitchers of beer…with the groom. Undeniably, this gets