Well despite WWE's creative process being in shambles these days, and despite RAW pulling in historic low ratings as a result, TLC 2018 was a very solid show overall.  Three of the four big matches delivered, a few of the undercard bouts were fun, and there wasn't one baffling booking decision all night.  By WWE's standards these days I'd call that a pretty unmitigated success.


The cruiserweight match and the Guitar on a Ladder match got bumped to the pre-show (I'd have swapped the Mixed Match Challenge and the CW match), so the proper PPV began with the Mixed Match finals.  This was a total nothing match that barely registered in my brain.  But it was short and I guess fairly inoffensive.  R-Truth and Carmella won, which means they get a vacation of their choice (Truth signed them up for a trip to WWE headquarters for some reason, so get ready for some dumb sketch comedy), and they get to enter their respective Royal Rumbles at #30.  I guarantee Truth tries to enter the Women's Rumble by mistake and thus doesn't participate in the Men's Rumble at all, allowing the company to put someone else in that spot.  Pointless end to a pointless tournament.  *

Next up was a very entertaining 3-way tag match, with The Bar defending against The Usos and The New Day.  The Smackdown tag division has some fine talents atop it.  RAW's not so much.  This was energetic, non-stop action as expected, with everyone working hard.  After a flurry of false finishes, Sheamus made a blind tag and hit Xavier Woods with a quick Brogue Kick to retain the belts.  Solid stuff here.  *** 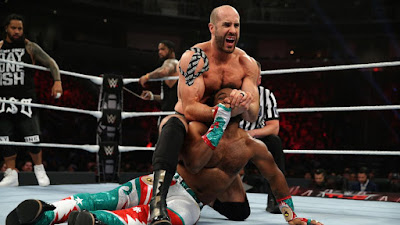 The match I was most dreading went on third and was mercifully just an angle.  Baron Corbin came out and announced that if Braun Strowman didn't show up by the count of ten (Heath Slater was the assigned official), that the match would go to Corbin by forfeit.  Strowman of course came out, took a mic, and pointed out that since TLC matches have no disqualification, he would be allowed help.  Apollo Crews, Gable & Roode, and Finn Balor showed up with chairs, and Heath Slater took off his referee shirt, and they all took turns waffling Corbin.  Strowman then put a foot on Corbin's chest and Slater counted the three.  Thus Corbin is gone as RAW GM (Thank Christ), and Strowman has earned a title shot against Brock Lesnar at the Rumble.  This was probably the best way to execute what would've been a stinker of a match.  NR


If any match on this show got too much time it was Natalya vs. Ruby Riott in a Tables match.  This started out kinda fun, with Riott's sidekicks trying in vain to interfere; Liv Morgan took a sick-looking bump from the apron to a table after pushing Ruby out of the way, in the spot of the match.  Once it was down to just Nattie and Ruby though, the match kinda dragged.  Spot setups took too long and Nattie seemed to hesitate too much when she should've been attacking.  Eventually Nattie powerbombed Ruby from the top rope through a table with Ruby's picture on it.  This could've been five minutes shorter.  **

Finn Balor and Drew McIntyre had a well-worked little match, with Drew looking somewhat dominant while still having a solid back-and-forth dynamic.  I was worried Finn would get squashed here but he was allowed to hold his own for 12 minutes until Ziggler showed up and tried to attack Drew at ringside.  Drew kicked a chair into Ziggler's face but the distraction was enough for Finn to dropkick the chair into Drew and hit the coup de grace for the surprise win.  An odd choice if Drew is being groomed for a main event spot, but I'll never complain about a Finn Balor win.  They really need to move him to Smackdown where he'll have room to shine.  This match was pretty good.  *** 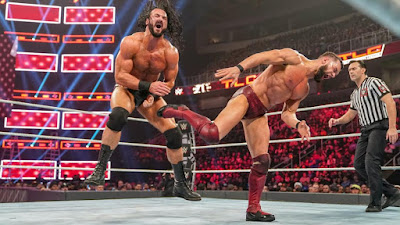 Rey Mysterio and Randy Orton had a much-maligned Chairs Match, which I actually found pretty entertaining.  Yes, a regular match would've been vastly superior, particularly since Chairs matches are stupid, but this had a few inventive spots, like Rey "sledding" a chair out of the ring on top of Orton, and the finish where Rey stepped up on a chair and victory rolled Orton for the three-count.  I've read multiple reviews saying this match was terrible but I thought it was alright.  I've seen plenty worse.  **1/4

The second half of this PPV really made the show (with one exception which I'll get to shortly).  Ronda Rousey and Nia Jax had an even better match than their first outing months ago, with crisply worked spots, great selling by Ronda, and an actual finish.  Highlights included Ronda hitting a gorgeous-looking cross-body off the top rope to the floor, Ronda reversing a second-rope Samoan Drop into a sunset flip bomb, and a couple of flying armbars that looked really impressive given the size mismatch.  After an unsuccessful Tamina interference attempt, Ronda set up the armbar, kissed Nia's "facebreaking" hand, and locked in the submission for the tapout.  Another very good showing by Ronda, who continues to amaze with her prodigious in-ring ability.  ***1/2 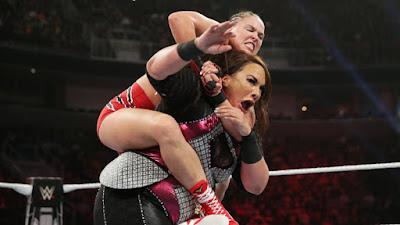 Match of the Night honors go, not surprisingly, to Daniel Bryan vs. AJ Styles, who had a gritty, 25-minute wrestling match that felt like an homage to ROH and New Japan.  This played out like WWE's "producers" got out of the way and just let these two put together their own match.  To my delight, Bryan finally brought back the "I have till five" bit and won the match by reversing a small package.  Here's hoping the small package becomes one of his most effective finishers again.  This match had a great old-school feel of building slowly and reaching a fever pitch in the third act, while also incorporating Bryan and AJ's state of the art offense, and the crowd bought into it completely, showere it with two separate "This is awesome" chants.  They left plenty of stuff on the table for future rematches as well; AJ went for the Styles Clash twice but couldn't get it, and only hit the Phenomenal Forearm on the outside, while Bryan missed his flying knee.  Damn good stuff from two of the best in the business, and the fluke finish left room for AJ to challenge again (hopefully at the Rumble).  ****1/2 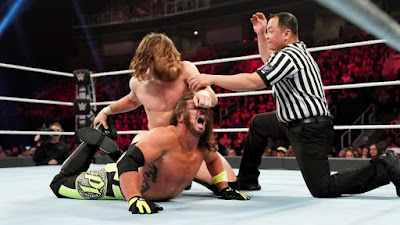 The disappointing match of the night was Seth Rollins vs. Dean Ambrose, in 2018's equivalent of HHH-Orton from WrestleMania 25.  This was a blood feud that's been building for two months, and these two proceeded to have a slow, plodding wrestling match instead of a blistering fight.  Whoever put this match together needs a punch in the taint.  The structure made zero sense for the feud, and the crowd turned on it hard.  Ambrose also controlled way too much of the match, which doesn't work when he's doing slow heelish offense.  Seth needed to come out of the gate like a house of fire to ramp up the crowd, and Ambrose should've either begged off or gone full sadist.  Instead we got a 23-minute match with zero urgency that ended out of nowhere when Dean countered a Curb Stomp attempt with Dirty Deeds.  This has to be their worst match together.  **

I was very happy to see the Women's TLC match go on last, as it felt organic and earned, unlike when WWE has put the women in the main event just to look progressive.  But Becky Lynch and her title reign has been the hottest thing on the show for months, and with the talent involved this match was easily the right match to headline.  The bout itself had some awkwardness early on; I felt like they went for the weapons too soon rather than building up to them, and there were a few moments where for example Becky had a ladder and was waiting for Charlotte to kick it into her.  But aside from that and the occasional audible call from Becky this match was a super fun car wreck spectacle, with everyone taking some stiff bumps and good work with the various weapons.  This was one of the more intense TLC matches in recent years; Charlotte took a brutal-looking spot where Becky jumped off a ladder onto her and both went through the announce table.  Charlotte visibly had the wind knocked out of her but was fortunately ok after that.  Another great spot, which came out of nowhere but got a huge pop, was Asuka taking a spear through the dasher boards.  Late in the match Asuka and Charlotte were fighting on a ladder, when Becky set up a second one.  Becky and Charlotte ended up on the second ladder and Ronda Rousey appeared, knocking them both off the ladder and allowing Asuka to climb up and capture the belt.  This clearly sets up Ronda's rematch with Charlotte for the Rumble, and then I'm guessing Becky wins the Rumble match to challenge Ronda at 'Mania.  I like all of this, and best of all, Asuka has finally captured main roster gold!  And with that, Asuka opened and closed the year by winning historic PPV main event matches.  This was a damn fine main event and for me a close second for Match of the Night.  ****1/4 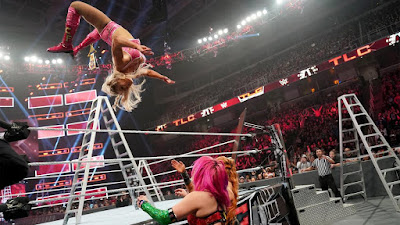 So yeah, all in all a pretty good PPV to close out the year.  Had Randy-Rey just been a regular singles match, and had Seth-Dean been a fast-paced 15-minute fight, this would be in the "main roster PPV of the Year" conversation.  WWE still needs to make major creative changes to fix their ratings woes, but at least they're getting a few things right.  The women's division is in pretty great shape going into 2019.

Best Match: Daniel Bryan vs. AJ Styles
Worst Match: Mixed Match Challenge
What I'd Change: Swap the MMC with Murphy-Alexander, make Rey-Orton a normal match, and have Seth and Dean beat the piss out of each other and you'd have an easy 9/10 PPV.
Most Disappointing Match: Seth vs. Dean
Most Pleasant Surprise: Finn Balor stealing a win
Overall Rating: I'll be generous and say 8/10.  Two ****+ matches and a few *** is nothing to sneeze at.