Welcome to another edition of PPV Showdown, where I'll take two editions of a given wrestling show and compare the shit outta them to determine which one is better.

Today I'm looking at the two best WrestleKingdom shows from New Japan, both of which rank very highly among the greatest PPVs I've ever seen.  From top to bottom each of these shows delivered a spectacular cross-section of the NJPW product and yielded multiple MOTY candidates.  WWE (or anyone else) will be hard-pressed to come up with anything nearly this good anytime soon. 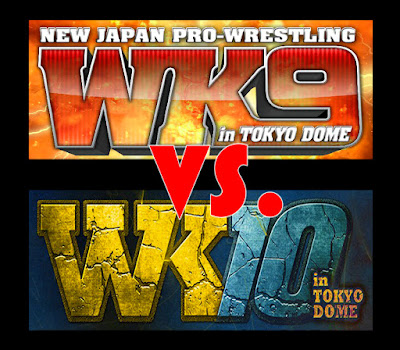 But there's a question that's been bugging me for a while now: which was better, WrestleKingdom 9 or 10?  Both editions were universally praised, and trying to pick one over the other is like trying to choose your favorite child.  Structurally the two shows were pretty similar and thus should be easy to compare.  Yet they were both so outstanding, how does one choose?  Well let's take this one step at a time and go down the card.  Hopefully when this is over we'll be able to determine once and for all which show was superior....

Both WKs opened with a 4-way match for the Jr. Tag Titles (as did WK8) to energize the crowd.  In both cases this match featured insane tandem offense and nearly non-stop action.  2015's match pitted Jr. Tag Champs reDRagon against The Young Bucks, Forever Hooligans, and Time Splitters.  There wasn't a wasted moment here and all four teams went basically balls-to-the-wall for 13 minutes before reDRagon retained.

By comparison WK10's version also saw reDRagon defending the straps, this time against The Young Bucks, Roppongi Vice, and hot new team Matt Sydal & Ricochet.  It was a similarly contested lightning paced battle, but this time The Young Bucks captured the belts after nearly 17 minutes.

So these matches were both roughly ***1/2 star spotfest-type affairs, but I'll give a slight edge to the WK10 version since it had a bit more time to breathe, plus Ricochet's mindboggling offense was a difference maker. 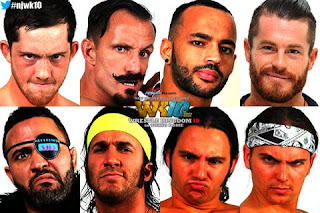 For the purposes of this face-off I'm lumping WrestleKingdom 9's two throwaway matches into one.  Literally the only negative thing I can say about WK9 is that it featured two of these multi-man tags in a row and each went only 5 minutes or so.  First TenCozy and Tomoaki Honma defeated Bad Luck Fale, Jeff Jarrett and Yujiro Takahashi, and then Naomichi Marufuji, Toru Yano and TMDK ousted KES, Shelton Benjamin and Takashi Iizuka.  Both of these matches were entirely inoffensive but forgettable and whenever I rewatch this show I skip them both.  Fortunately they took up less than 11 minutes of ring time.

For WK10 though New Japan created a new championship: the NEVER Openweight Six-Man Titles.  The inaugural Champions would be crowned here, with Bad Luck Fale, Tama Tonga and Yujiro Takahashi facing Toru Yano and the Briscoe Brothers.  This was the weakest match on the show but it got roughtly the same amount time as the two WK9 matches combined and featured enough good wrestling to avoid being a throwaway.

Easy decision here - I'll take the WK10 match over the other two. 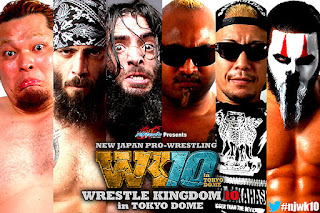 This comparison isn't quite as direct, but both shows had an undercard singles match with a purpose.  WK9 featured an MMA rules match between real-life tough guys Minoru Suzuki and Kazushi Sakuraba.  This rugged bout was a lot of fun and different from anything else on the show.  Suzuki eventually got the win by ref stoppage in about nine minutes.

WK10 included a Ring of Honor Title defense by Jay Lethal, against Michael Elgin.  While this bout was fine for its slot on the card, it felt very underwhelming for an ROH Title match.  It came off like a free TV bout rather than a major PPV Title defense.  Nothing really wrong with it (aside from the cheap finish), but it just didn't live up to expectations.

The Suzuki match was ultimately much more satisfying and was unique for the show.  Lethal-Elgin was one of four or five matches that included outside interference. 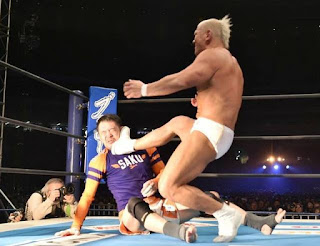 WK9 marked the arrival of Kenny Omega as a major force in New Japan.  He'd recently turned heel and joined The Bullet Club, and his in-ring style became very character-driven, with heel antics aplenty.  Jr. Champ Ryusuke Taguchi's role in this match was to help get Omega over big, and he did a yeoman's job.  These two meshed quite well actually, with Taguchi's slightly comedic babyface stuff serving as a nice counterpoint to Omega's over-the-top villain theatrics.  Omega won decisively at about 13 minutes to capture the belt and begin his two-year ascent to the top of the promotion.

One year later Omega would defend that same title against heated rival Kushida in the Dome.  This was another fine Jr. match but to me felt a little brief considering it was the blowoff to this feud (and especially given how amazing their first match had been six months earlier at Dominion).  By that same token the finish seemed out of nowhere, as Kushida countered the One-Wing Angel with a cradle to recapture the gold.  Again, there was nothing wrong with this match but it felt incomplete to me.  Very strange since it was nearly the same length as its WK9 counterpart.

Both matches were very good but I liked the WK9 match a little better. 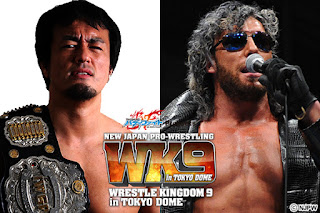 Here's a pair of incredible slugfests, both involving the defending NEVER Champion Tomohiro Ishii (one of the best workers in the world).  At WK9 Ishii faced Togi Makabe, and these two literally just beat the shit out of each other for 12 minutes.  At the time I'd never seen anything like this, and I dunno how either guy was standing afterwards.  This here is what Strong Style is all about.  How hard can I hit you without doing real damage?  Goddamn this was great.

But guess what....Ishii and his WK10 opponent Katsuyori Shibata would top it a year later.  Again the NEVER match was about two guys pretending to kill each other, but this match got nearly 18 minutes and therefore felt like a top bout (which it was, placed third from the end).  Shibata would capture the title with the Penalty Kick, and elevate himself considerably on the roster.

I could watch Ishii pound the tar out of opponents all day.  Both these matches were fantastic, but the WK10 bout transcended this type of match. 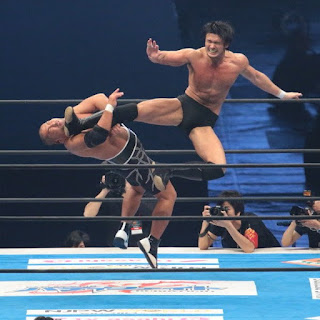 Here are two Tag Title matches that feel very similar.  At both shows Karl Anderson & Doc Gallows defended against a pair of popular babyfaces.  WK9 saw Shibata and Hirooki Goto challenge for the straps in a furiously paced fight.  There wasn't anything too fancy here, it was just two teams trying to get the win as quickly and decisively as they could.  A very fine nine-minute match for its spot.

WK10 saw a similar story but this time Togi Makabe and Tomoaki Honma had won the World Tag League and earned the title shot.  This match got considerably more time (almost 13 minutes) and was boosted by two things.  For one, Anderson and Gallows were on their way out of the company and clearly wanted to leave a good impression, so worked extra hard.  The other, more compelling aspect was Honma's underdog quest to win his first championship, and when he and Makabe scored the win the place became unglued.  Both match finishes got a great reaction, but this one was off the charts.

I liked both of these bouts, but the second was easily more memorable. 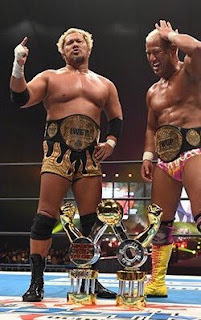 Tetsuya Naito was on the verge of superstardom for years but for a long time just couldn't turn the corner.  He had the in-ring talent and athleticism and was seemingly a perfect meat-and-potatoes babyface, but he just wasn't connecting with the fans.  His WK9 match against Bullet Club leader AJ Styles was largely about his quest to become the #4 guy in the company.  This gracefully worked 14-minute bout was about as close as two guys could get to having a main event without upstaging the two matches that followed it.  AJ would counter a top-rope hurricanrana into a spectacular Styles Clash off the second strand to catapult himself back into Title contention.

One year later, Naito had finally figured out what was missing, and adopted a villainous, iconoclastic persona who gave less than a shit about the fans, tradition, respect, you name it.  His first major feud after this was against Hirooki Goto, and their rivalry culminated in a WK10 match that featured copious interference from Naito's pals Evil and Bushi.  Goto would overcome the shenanigans and win with the Shouten after 12 minutes.  What seemed like a sure win for Naito backfired, and Goto was named the new #1 Contender.

One of these matches was great, the other was just good.  Hard to compete with an AJ Styles match. 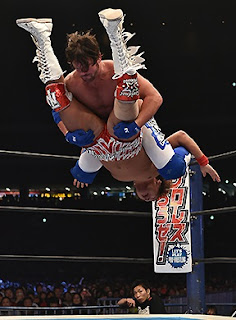 For my money the Intercontinental Title match stole the show at both events, and moreover it was my pick for Match of the Year.  WK9 saw Shinsuke Nakamura defend against defiant underdog babyface Kota Ibushi.  A more balletic match you're unlikely to witness.  This was 20 minutes of sublime action with a purpose.  Every move had weight and meaning, Nakamura tried to bully Ibushi around the ring but Ibushi wouldn't have it.  This was essentially note-perfect and I defy anyone to show me a single thing wrong with the match.  Absolutely breathtaking.

Equally impressive in a different way was Nakamura's subsequent title defense against AJ Styles.  Nak and AJ had never faced each other one-on-one, and this more than lived up to the Dream Match moniker.  For 25 minutes these two pulled out every move in their respective arsenals and crafted a true main event match.  Considering they'd never worked together before this felt like they were longtime rivals.  Each adapted flawlessly to the other's unique sensibility and the result was magic.

Both of these matches are among the best of this century, if not ever.  I liked Nak vs. Ibushi better just by a hair. 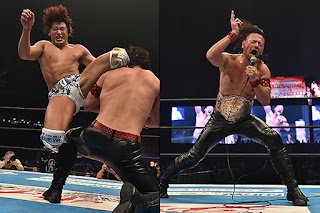 We have ourselves a 4-4 tie going into the main event.  It all comes down to this, as it should.  On top of that, it's the same main event on both shows: Hiroshi Tanahashi vs. Kazuchika Okada.  New Japan's Ace vs. his heir apparent.  This is the hardest point to decide.  Both matches were truly epic examples of pro wrestling storytelling, with the young lion desperately trying to knock the established veteran off the mountaintop.  This story was told patiently and deliberately over a four-year period, and in both these matches the payoff was magnificent.  Both bouts built off their previous ones, with counters after counters, finisher kickouts, and even stolen finishers.

WK9's main event was basically a perfect Tanahashi-Okada match that ended after 31 minutes with Tanahashi narrowly clinging to his Title and Okada leaving the ring in tears.

WK10's main event was a mammoth climax to the feud that ran 36 minutes and culimated in Okada smashing Tanahashi with three consecutive Rainmaker clotheslines to finally break the glass ceiling and become the company's new Ace.

How does one choose a favorite among these classics?  They're #1 and #1A.  But I have to give the razor-thin edge to the WK9 bout due to its slightly streamlined running time.  For me this is the greatest Tanahashi-Okada match of all time. 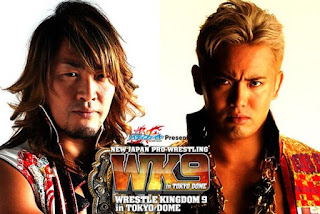 Man, it's tough to pick one favorite between two such stellar PPVs, but I think we have a winner by the narrowest possible margin.  WK9 had a couple throwaway bouts, while WK10 overused the outside interference bit during the undercard.  Aside from those nitpicks both shows were essentially flawless.  But for me WrestleKingdom 9 still stands atop the NJPW mountain as the greatest show I've ever seen from them (maybe from anyone). 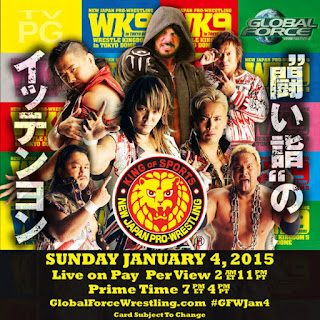