Welcome to another edition of Top Ten Things here at Enuffa.com, the website Facebook doesn't want you to look at!  Giving away users' private information is cool, but don't share links from this trifle of a website concerning fake fighting and movies; that my friends is a bridge too far.  God, Facebook blows....

Okay, enough shade-throwing.  Today I'm here to talk about Third Albums.  You may recall my lists about debut albums and second albums (I'll wait while you check those out), and today I'm continuing that theme.

There are so many bands I either became aware of with their third record, or who for me found their voice on said third record.  I find most great bands peak somewhere in the three-to-five-album phase, as they separate themselves from their influences and form their own style.  In some cases this creative breakthrough coincides with a major label signing, allowing the artists to freely explore their sound and songwriting without budgetary constraints, but sometimes it's simply a maturing process.  Anyway, here are my ten favorite "third" albums (with a handful of Honorable Mentions)....

The Police - Zenyatta Mondatta
Key Tracks: "Don't Stand So Close to Me," "Bombs Away," "Shadows in the Rain"

Corrosion of Conformity - Blind
Key Tracks: "Damned for All Time," "Dance of the Dead," "Vote With a Bullet"

Haken - The Mountain
Key Tracks: "Falling Back to Earth," "Pareidolia," "Somebody" 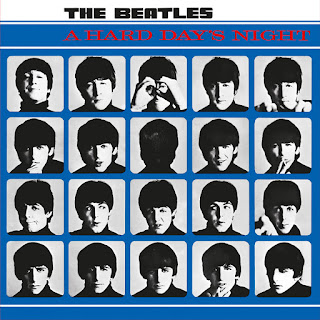 In 1964 The Beatles had conquered both the UK and the US, becoming such pop culture icons they were tapped to star in a feature film.  Directed by Richard Lester, A Hard Day's Night starred the Fab Four as themselves, in a "day in the life" kind of story.  The soundtrack album featured numerous classic early Beatles songs, like the energetic title track, the bittersweet "If I Fell," the instantly catchy "I Should've Known Better," the bluesy "You Can't Do That," and the morose "Things We Said Today."  A Hard Day's Night followed up The Beatles' first two pop albums with slightly more mature content and showed a band beginning to experiment with their signature sound and broaden their musical range. 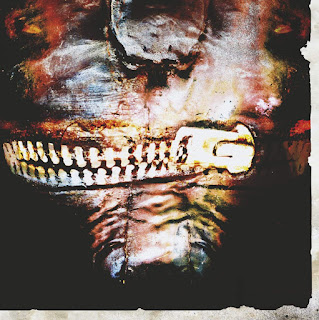 I cared not one whit about this nine-piece extreme metal outfit from Iowa until their third album.  Produced by Rick Rubin, The Subliminal Verses saw the band temper their insanely aggressive style a bit and throw in some melody, making for a much more interesting set of songs.  The band's trademark brutality is still there, but frontman Corey Taylor, weary of "all screaming all the time," actually does some singing to make each chorus stand out from the others, and they've even thrown in a bit of acoustic guitar and vocal harmonies into the mix.  When I bought TSV it stayed in my car CD player for weeks and I listened to it on a loop.  The single "Duality" instantly caught my attention with its sinister chorus hook, but the tragic-sounding "Vermillion part 1" is for me the band's greatest song.  This record is still Slipknot's apex. 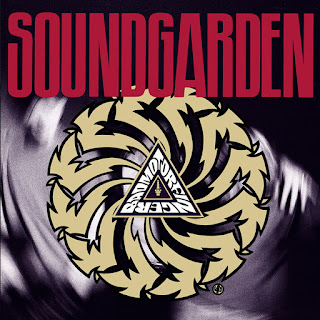 Like many fans of this influential Seattle quartet, I first became aware of Soundgarden thanks to their gritty single "Outshined," which featured one of the most menacingly murky riffs I'd ever heard up to that point, in 7/4 time no less.  Between the ugly detuned guitars and Chris Cornell's blistering vocals (RIP Chris, I still miss you like hell), I was hooked right away.  The album's galloping opener "Rusty Cage" also caught my attention and became one of my favorite Soundgarden tunes, while tracks like the apocalyptic "New Damage" and the horn-infused "Drawing Flies" illustrated the band's unique mix of alternative rock and doom metal influences.  I still consider Soundgarden the best of the Seattle grunge bands, and BMF is the moment they really arrived, only to release their masterwork a few years later. 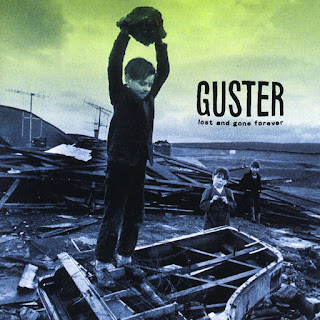 I resisted getting into this quirky alt-folk-rock band from Boston for years.  My future wife loved them and tried to enlist me as a Guster fan several times before one song (the Beatles-esque "Red Oyster Cult" off Keep It Together) finally piqued my interest.  From there I took a listen to the earliest Guster album she owned, 1999's Lost and Gone Forever, and that time it just clicked for me.  I marveled at the band's eclectic songwriting and mix of sounds, becoming an instant fan of the bouncy "Barrel of a Gun," the moody "Fa Fa" (featuring a chill-inducing saxophone cue late in the song), and the layered vocals of the resentful "Happier" (the vocal interplay between Ryan Miller and Adam Gardner is one of Guster's auditory pleasures).  This album's 44 minutes cruise by amid eleven diverse tunes, and two decades later Lost and Gone Forever holds up as their definitive record.

6. Queens of the Stone Age - Songs for the Deaf 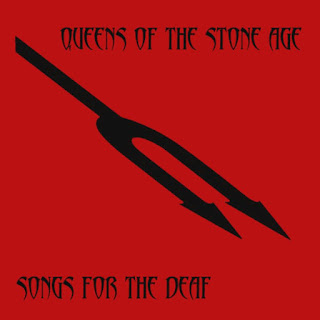 Another band I'd never heard of until the first single dropped from their third album, QOTSA is the brainchild of former Kyuss guitarist Joshua Homme (I didn't discover the Kyuss connection until much later).  Their bouncy but ominous hit song "No One Knows" grabbed me right away but the rest of the album initially left me cold.  A decade later I gave it another listen, and this time I was ready for its unusual barrage of filthy guitar riffs and varied vocal deliveries.  The darkly playful 5/4 dirge "Hanging Tree" (featuring the sandpapery vocals of Mark Lanegan) and the funereal album closer "Song for the Deaf" rank high for me on the band's all-time list of tunes, while the simplistic "Go With the Flow" and the Tarantino-esque surfer "Another Love Song" are standout supporting tracks.  The record is tied together with fictional radio station clips, inspired by a long car trip Homme took through California.  Later topped by their sixth album ...Like Clockwork, Songs for the Deaf is nonetheless the peak of QOTSA's early career. 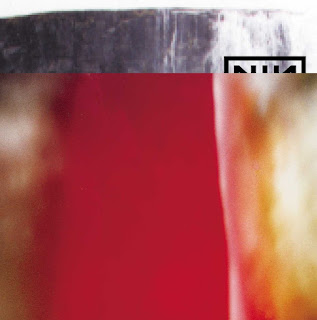 Five years after becoming one of the hottest acts in music with The Downward Spiral, Trent Reznor dropped his epic Nine Inch Nails double album The Fragile, a sequel of sorts about the inner turmoil he was experiencing at the time.  Reznor was struggling with severe depression and drug addiction, and The Fragile made extensive use of stringed instruments to suggest profound imperfection and things coming apart at the seams.  The album's overall sound was less aggressive than Spiral, full of mood swings, instrumentals and vocal harmonies to convey Reznor's emotional chaos, while demonstrating his increasingly sophisticated songwriting.  It may not have been the smash hit Spiral was, but in retrospect many NIN fans cite this album as their favorite.

Key Tracks: "The Fragile," "The Day The World Went Away," "Into the Void" 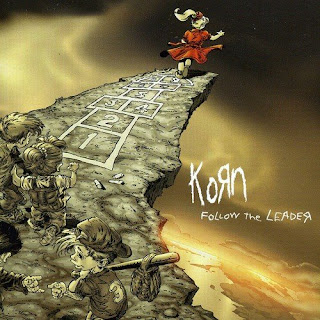 In 1998 KoRn became one of the most popular bands in the world with their rap-metal hybrid Follow the Leader, a brutally heavy, ugly guitar riff-centric continuation of the themes explored on their first two records.  Moving away from the "troubled childhood" material on KoRn and Life is Peachy, FTL incorporated subject matter pertaining to the band's newfound mainstream notoreity and the inherent struggles therein.  Radio hits like the disco-grooved "Got the Life" and the tortured "Freak on a Leash" propelled the album to quintuple platinum status and made KoRn a household name.  I consider this the best-produced of all KoRn albums, the perfect mix of raw grit and state-of-the-art studio polish.  In many ways it's also their most demented record, combining morbidly disturbing imagery with a perverse sense of humor. 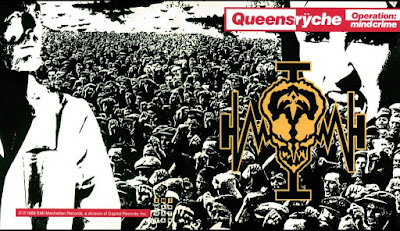 One of my all-time favorite concept albums, and the one that introduced me to Seattle prog-metalers Queensryche, Operation: Mindcrime tells the story of a disillusioned drug addict who falls in with an underground group of political radicals planning to overthrow the government.  Along the way he develops a relationship with a hooker-turned-nun, and is then ordered to kill her.  He is eventually arrested and put in a hospital, where he recalls the events of the story.  The songwriting here is masterful, featuring intricate guitar harmonies, operatic, instantly memorable chorus hooks, and a kinetic narrative that hurtles to its tragic conclusion.  Thirty years later, Mindcrime remains Queensryche's most ambitious and best album, melding theatrical storytelling with complex musical arrangements to form a prog-metal classic.


2. Iron Maiden - The Number of the Beast 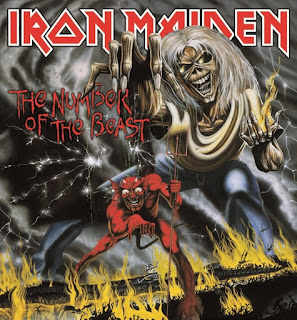 The first Iron Maiden album to feature Bruce Dickinson on lead vocals, and thus for me the first "real" Iron Maiden album (Come on, it ain't Maiden without Bruce), Number of the Beast is the band's masterpiece.  At a lean 39 minutes and eight tracks, there's nary an ounce of fat on this record.  NOTB is the album where Maiden perfected their signature gallop, over which Dickinson's operatic wail soars.  I consider the title track and "Run to the Hills" Maiden's two greatest songs, but the opening sprint "Invaders" and the oddly hopeful "The Prisoner" are additional highlights.  NOTB was the band's first album to top the charts, eventually selling a staggering 14 million copies worldwide, and began an incredible seven-album run for the Dickinson-fronted incarnation before he took a hiatus in the 90s.  For me this is THE Iron Maiden album, one they aren't ever likely to equal.

Key Tracks: "Invaders," "Number of the Beast," "Run to the Hills" 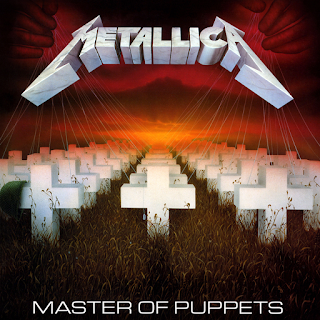 The album universally considered Metallica's apex, Master of Puppets marked the point when the band fully matured and honed their unique brand of thinking man's metal, weaving a dense, multi-layered tapestry of triphammer rhythm guitars, thundering drums and bass, swirling leads, and nihilistic, rage-fueled vocal growls with an increasing influx of dynamic and mood shifts.  The result is about as close to a perfect metal album as can be imagined.  Each member of the group was firing on all cylinders and their songwriting had reached new levels of complexity.  For most fans Master of Puppets is the definitive Metallica record, one that amazingly went platinum without any radio singles, and took them from cult heroes to genre leaders; their tour with Ozzy Osbourne would be their last as a supporting act.  Puppets was the culmination of the band's growing underground popularity and paved the way for them to become mainstream icons.


Posted by Justin Enuffa Ballard at 8:45 AM