Welcome to another Top Ten Things, here at Enuffa.com, where I compile a list of ten, well, things.

Today it's the ten greatest September PPV matches of all time.  September has often been the beginning of a slump period on the WWE calendar, where the summer angles have long since peaked at SummerSlam and now the company sorta treads water until WrestleMania season starts.  But that doesn't mean there haven't been some great individual efforts.  This list is also not limited to WWE; fans of NJPW and TNA will see a little sumthin-sumthin for them as well. 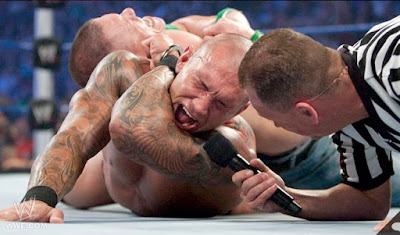 The PG Era was in full-swing by 2009, and that meant no more blading in a WWE ring.  While for the most part this didn't affect the product all that harshly, it did mean gimmick matches might potentially suffer, as Hell in a Cells and Elimination Chambers would now have to be blood-free zones.  That just doesn't seem right.  But at the one-time Breaking Point event (where the main event matches all had submission rules), John Cena and Randy Orton managed to circumvent these rigid new limitations and deliver a masterpiece of understated violence, in an I Quit match.  Their fight played out much like a climactic movie sequence; Orton utilized his exceptional facials and reptilian in-ring persona to make every move seem downright malicious, seemingly relishing each moment.  At one point he handcuffed Cena and proceeded to flog him mercilessly with a kendo stick, leaving sickening welts all over his torso.  Cena eventually made a comeback, applying the STF and choking Orton out with his own arm.  That this I Quit match worked so well despite being pretty tame compared to say, Mankind vs. The Rock speaks volumes of Cena's and especially Orton's ability to get across character and expression.  I'd cite this as Orton's first foray into becoming a true main event-worthy player. 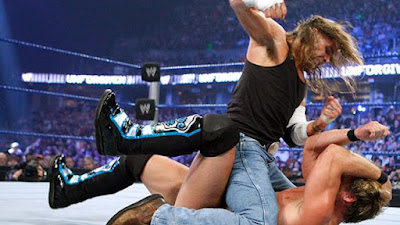 The best feud of 2008 was undoubtedly Chris Jericho vs. Shawn Michaels.  After a babyface return in late 2007, Jericho quickly turned heel again in early '08, retooling his persona after the character of Anton Chigurh from No Country for Old Men.  Jericho became soft-spoken, sullen, and sanctimonious, insisting that born-again Christian Shawn Michaels was a hypocrite who didn't follow his own beliefs.  Their feud was intended as a one-off match that spring but stretched over nearly six months.  The best match of this saga in my opinion was the non-sanctioned street fight at Unforgiven, which sprung from an incident at SummerSlam.  Jericho invited Michaels and his wife Rebecca to his talk show, and their bickering led to Jericho accidentally knocking Rebecca out with a punch.  Again, this was tame by Attitude Era standards, but in the new PG Era it was treated as a huge deal, and the two wrestlers played it to the hilt.  Their fight was brutal without being bloody, and it ended via ref stoppage when Michaels had beaten Jericho unconscious. 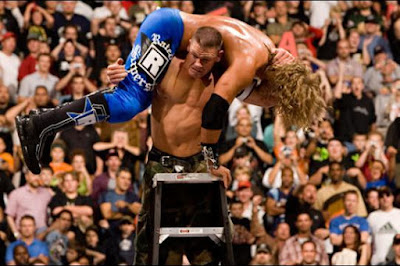 Edge's main event push was one of the few highlights of 2006.  His rivalry with John Cena began that January when Edge cashed in the first-ever Money in the Bank briefcase, picking his spot just after Cena had survived an Elimination Chamber.  Cena regained the Title weeks later, but Edge would capture it again over the summer, and the feud reached a fever pitch at Unforgiven in a TLC match.  While a one-on-one TLC match was unusual at this time, these two were more than up to the challenge, delivering a memorable war full of dangerous high spots.  Cena would regain the Championship after executing the Attitude Adjustment off a ladder through a table. 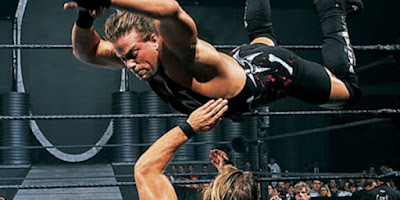 The much-maligned Invasion Angle will never win any awards for booking, but it did produce some classic matches, such as this show stealer.  Rob Van Dam had debuted in the WWF two months earlier and became the hottest star in the company, winning a blazing feud against Jeff Hardy before moving on to Jericho.  Their Hardcore Title match at Unforgiven was a searingly intense battle full of weaponry and aerial tactics, and ultimately RVD finished Y2J with the Five-Star Frog Splash to retain. Recently crowned IWGP Champion Kenny Omega would once again face one of his fiercest rivals Tomohiro Ishii, less than two months removed from their G1-stealing match.  This one was a bit slower paced than their others but built to a fantastic crescendo over its 31-minute running time.  Despite having no chance of winning the title, Ishii nonetheless made the live crowd believe he just might pull it off, defiantly kicking out of numerous nearfalls before finally succumbing to the One Winged Angel.  Another excellent showing from two perfectly matched opponents. 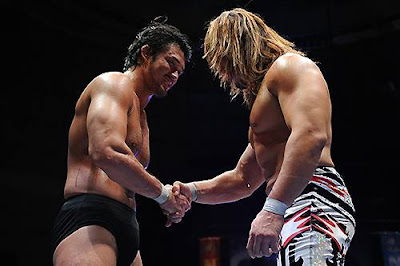 Two of the best in New Japan squared off at 2014's Destruction PPV, and it was an 18-minute war.  Shibata is known for ultra-stiff, rugged offense, and Tanahashi was absolutely game for this kind of match. The two popular stars traded incredibly painful-looking shots throughout, eventually racing to hit their respective finishers only to have them countered.  Finally Tanahashi found a break and hit two consecutive High-Fly Flows for the win. 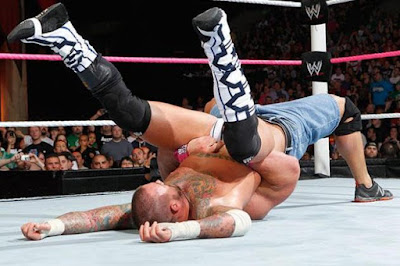 These two natural enemies had an amazing series of matches from 2011-2013, and this was the third classic in the saga.  Punk had regained the WWE Title ten months earlier and eventually turned heel, seething with resentment at being treated as a lesser star than WWE's posterboy.  Adopting a means-to-an-end attitude and taking on Paul Heyman as his manager, Punk was no longer afraid to take shortcuts in the ring.  This battle of attrition raged for 26 minutes before Cena executed a German superplex and the referee counted three.  Much to Cena's chagrin however, his shoulders were also down for the count and the match was ruled a draw.  A rematch was scheduled for Hell in a Cell, but sadly Cena sustained an injury and we never got to see it. 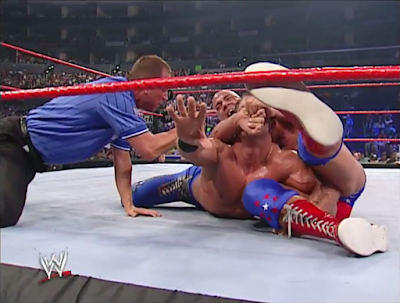 The two best technical wrestlers in the company (and probably the world) at this time engaged in a legendary on/off feud from 2001-2003, and while not the apex of said rivalry, this match is near the top.  There was no major angle taking place between Angle and Benoit, this was just a battle for dominance.  They built on their 2001 match series and delivered a blistering 15-minute clinic with nary a low point.  Benoit eventually won with a quick rollup, and these two would go on to become reluctant tag partners in the quest for the new WWE Tag Team Titles. 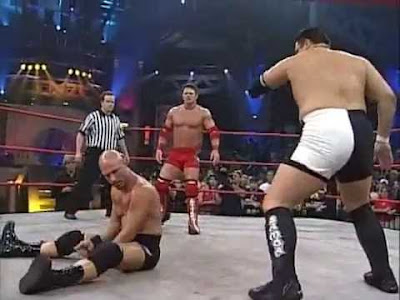 Styles, Daniels and Joe.  These were the three men on whose backs TNA was built.  While the main event scene mostly consisted of former WWE and WCW talent, these three men were blowing the rest of the card out of the water in the X-Division.  This three-way match was the first and only TNA bout to earn a five-star rating from the Wrestling Observer, and it's not hard to see why (I believe this was also the first time an X-Division match headlined a PPV).  Where most Triple Threat matches tend to devolve into "one guy rests while the other two fight," these three ring generals interwove their dazzling offense seamlessly, stringing together nearly 23 minutes of breathtaking action, as if to say "We all know THIS is the reason people watch TNA!"
2. The Young Bucks vs. Lucha Brothers - AEW All Out - 9.5.21 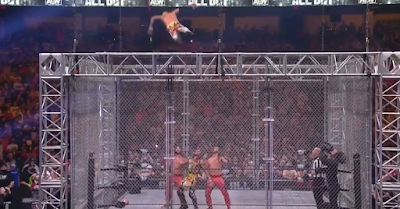 It was one of the greatest steel cage matches of all time.  Hell, it was one of the greatest tag team matches of all time.  Matt and Nick and their longtime rivals Penta and Fenix tore the roof off the Sears Center in Chicago with this 21-minute war of attrition at AEW's third annual All Out PPV, a match that incorporated both teams' spectacular movesets but also gritty drama and some bloodshed.  By the end both Luchas and Nick Jackson were bleeding thanks to a thumbtack-covered Nike high-top, before Fenix delivered a breathtaking high crossbody off the top of the cage and the Luchas put Nick away with a spike piledriver to capture the AEW Tag Titles.  Just an unbelievable tag team war. 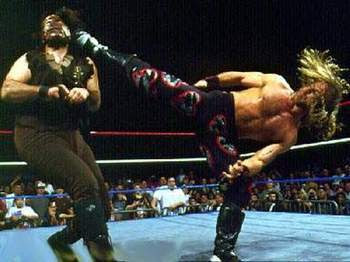 One of my favorite wrestling matches of all time.  In a classic mismatch of styles, the handsome, clean-cut babyface Champion defended against the malformed, deranged villain, and the results were spectacular.  Shawn Michaels and Mankind apparently planned out very little of this match, making up most of it as they went.  There were no stipulations or gimmicks, but this plays out almost like a hardcore match, so violent and aggressive is its overall tone.  Much of Shawn's offense consisted of using Mankind's size and momentum against him, and employing hit-and-run tactics to minimize his size disadvantage.  The spot this match is most remembered for though is Mankind's second rope suplex through the announcers table, one of the most brutal-looking bumps I had ever seen in 1996.  The only downside of this match is that it ended in a disqualification, but otherwise this is a near-perfect contest and it's not surprising both Shawn and Mankind consider it one of their absolute best.

Posted by Justin Enuffa Ballard at 8:53 AM