Welcome to Top Ten Things, here at Enuffa.com, where I'll count down my ten favorite something-or-others.... 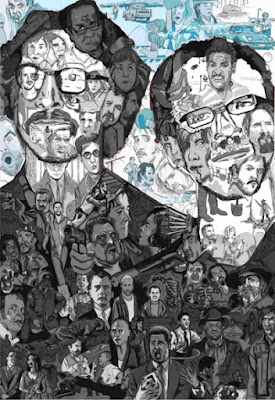 Today's topic is Joel and Ethan Coen, the co-director brothers who specialize in strange characters, meticulously crafted dialogue, and sometimes head-scratching endings.  The Coens have built a tremendously diverse and idiosyncratic slate of films spanning multiple genres, often involving film noir elements and seedy criminals, but sometimes taking the form of a sardonic comedy or scathing satire.  I've been a fan of theirs more or less since they debuted with Blood Simple, but it was in the mid-90s that Joel and Ethan reached their full potential, and they've helmed multiple classics over the past thirty years.

But which Coen films are the best?  Let's look at the top ten now, shall we? 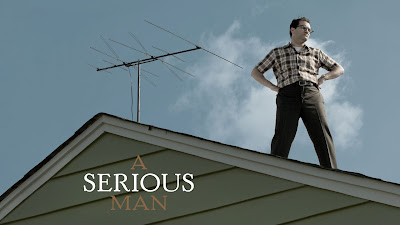 This uncomfortable dark comedy about a physics professor whose life begins spiraling out of control was quietly nominated for multiple Oscars and largely flew under the radar.  Michael Stuhlbarg stars as Larry Gopnik, a husband and father of two whose wife wants to leave him for his best friend, and whose slightly delinquent kids don't respect him.  Stuhlbarg carries the film with an understatedly comic performance, reacting to each new hardship with annoyed disbelief.  The Larry character reminds me a bit of Barton Fink in that he never seems to give up hope or accept that he's simply screwed.  The film has a philosophical tone but ultimately appears to arrive at the conclusion that bad things sometimes happen to people just because.  An unexpectedly strong inclusion to the Coens' filmography. 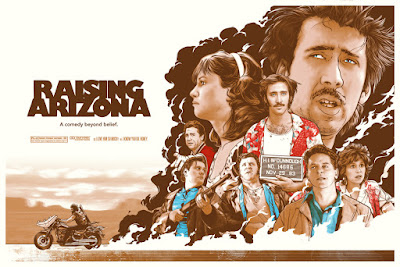 This zany western-comedy stars Nicolas Cage and Holly Hunter as a robber and cop, respectively, who inexplicably fall in love and decide to steal a baby from a rich couple who has just had quintuplets.  But soon Cage's ex-cellmates escape prison and pay him a visit, and he goes back to armed robbery, while the baby's actual parents hire a grizzled bounty hunter to retrieve their child.  The film blends screwball elements with those of Mad Max to show off the Coens' bizarre sense of humor, and also marks their first of several brilliant collaborations with John Goodman. 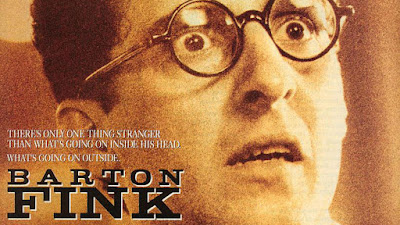 Possibly the weirdest Coen Brothers film is this dark, moody period piece set in 1941, about a playwright-turned-screenwriter plagued with writer's block.  John Turturro's title character lives in a Hollywood hotel and befriends his next door neighbor Charlie (John Goodman), who turns out to be a brutal serial killer.  This psychological drama was written over three weeks while Joel and Ethan struggled to complete the Miller's Crossing script, and though difficult to fully categorize, contains elements of film noir, horror and surrealism.  Barton Fink is read by some as symbolic of the rise of fascism in Eastern Europe, while others see it as a parable about a man trapped in Hell.  Whatever the interpretation, Barton Fink is a darkly unique, haunting entry in the Coen pantheon. 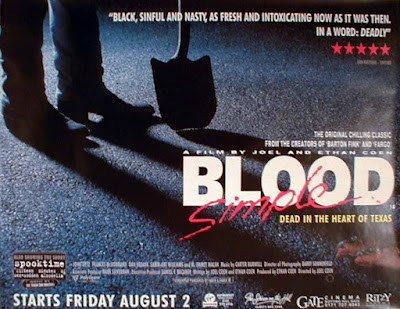 The Coens' debut was this unusual take on the hardboiled detective story, about a bar owner who hires a private dick to murder his wife and her lover (one of his bartenders).  From there this noirish tale takes several unexpected left turns, and before long the wife finds herself mano a mano against the murderous detective.  Blood Simple introduced the world to the Coen Brothers' gruesome sense of humor, blending graphic violence with dark comedy. 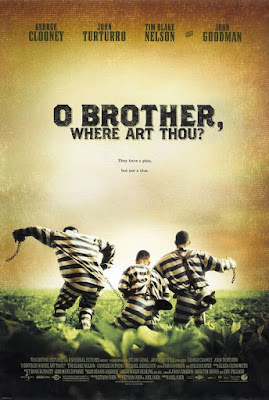 One of the Coens' most purely entertaining films is this Depression Era buddy adventure, starring George Clooney, John Turturro and Tim Blake Nelson as three escaped convicts trying to stay one step ahead of the law.  Based very loosely on Homer's Odyssey, O Brother mixes elements of that story with 1930s cultural references and features a folk-bluegrass soundtrack (which was arguably even more critically and commercially successful than the film itself).  The overall film isn't their most cohesive work - it plays like a series of episodes and cliffhangers - but it's one of their more lighthearted, fanciful efforts and contains some of their most memorable standalone sequences.

Loosely based on the life of folk singer Dave Van Ronk, Inside Llewyn Davis stars Oscar Isaac as the title character, a struggling singer-songwriter in the early 60s Greenwich Village scene.  Davis was once part of a fairly successful duo but hasn't had a hit record since his partner committed suicide, and he also learns he has knocked up his friend Jim's wife.  The film follows Llewyn's misadventures over several days as he crashes at a friend's apartment, loses their cat, travels to Chicago for an audition, and ultimately ends up right back where he started, playing Village folk clubs.  The charm of this movie lies in its having captured the essence of the period and setting, coupled with its remarkable original soundtrack, and of course Isaac's restrained performance as the distressed Llewyn.  It took me two viewings to fully appreciate ILD, but it's now one of my favorite Coen films. 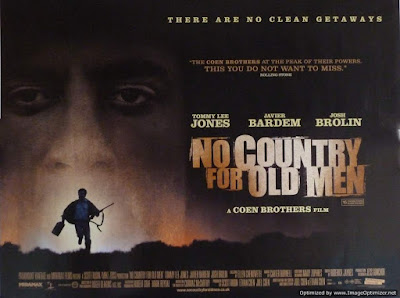 The first and thus far only Coen film to win Best Picture, No Country for Old Men is a grim, suspenseful crime thriller based on the Cormac McCarthy novel.  Much of the film is a cat & mouse game, as a welder named Llewelyn Moss stumbles across a drug deal gone wrong and makes off with $2 million in a suitcase, but is pursued by a relentless, icy psychopath named Anton Chigurh.  One step behind the two adversaries, aging Sheriff Tom Bell tries to make sense of the violence, both in this situation and in the world as a whole.  The film's best passages involve Moss and Chigurh trying to outwit and outmaneuver each other, building palpable tension.  Javier Bardem's Oscar-winning turn as the latter would provide one of the all-time great screen villains; Chigurh is a truly frightening character whose weapon of choice is a bolt gun designed to kill cattle.  NCFOM is among the Coens' most intense films and marked a resurgence after their lackluster work in the early 2000s. 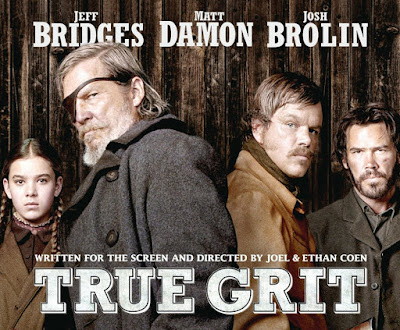 This remake of the Charles Portis western novel stars Jeff Bridges as the iconic US Marshall Rooster Cogburn and precocious newcomer Hailee Steinfeld as Mattie Ross, who hires Cogburn to bring her father's killer to justice.  What follows is an adventure through the frontier wilderness as the two protagonists and a Texas Ranger track the gang of outlaws.  Despite the period language, the Coens have a lot of fun creating playful dialogue, and Steinfeld's Oscar-nominated performance provides an anchor for the audience.  This is one of the great remakes in cinema history, and about a year ago it prompted the following comment from my wife: "Why the fuck did you wait so long to make me watch this??" 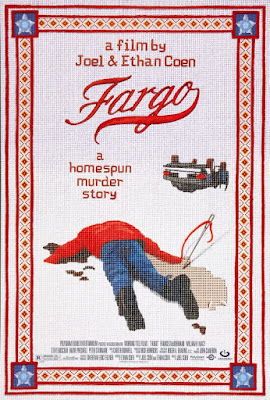 The film that really put Joel and Ethan on the map was their sixth, a bizarrely quirky crime story about a car salesman who has his own wife kidnapped in order to collect the ransom from his wealthy father-in-law.  But things quickly go awry, mostly due to the ineptitude of both the car salesman and his hired kidnappers, and a plucky, pregnant Police Chief has to investigate a pair of murders connected to the case.  This film for me really captured the Coens' stylized, conversational approach to dialogue, not to mention introduced us all to the hilariously over-the-top Minnesota accent.  The entire cast is flawless, particularly Frances McDormand as Police Chief Marge Gundersen and William H. Macy as the bumbling architect of the crime, Jerry Lundegaard.  Fargo is a near-perfect mix of suspense and humor, and certainly the one that turned the Coens' career around. 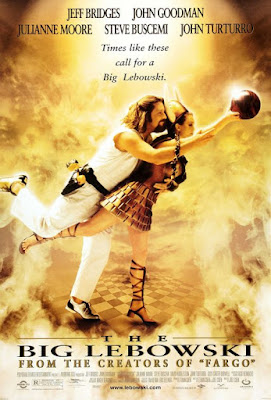 For me though the top of the Coen heap is this 1998 buddy comedy starring Jeff Bridges and John Goodman, in roles with which they'd be indelibly linked.  This hilarious Raymond Chandler-esque crime film concerns Jeffrey "The Dude" Lebowski and Walter Sobchak's exploits to unravel a kidnapping mystery while steering clear of the alleged kidnappers, a private detective, and the millionaire who's put up the ransom.  If there's a more eminently quotable movie out there, I'd like to see it.  The Big Lebowski shows the Coens at the peak of their unique screenwriting powers, crafting unforgettable, rhythmic dialogue (that makes frequent and spectacular use of the word "fuck") and a tapestry of memorable secondary and tertiary characters.  I daresay The Big Lebowski is the funniest movie I've ever seen, and for me no Coen Brothers film is likely to ever top it.


Posted by Justin Enuffa Ballard at 9:29 AM