Welcome one and all to yet another edition of Top Ten Things, here at Enuffa.com!  It's a list of ten things.  A list steeped in hyperbole.  I'm not ashamed to admit it.

Today we'll be talking about the greatest wrestling T-shirts of all time, in my humble estimation (Ah fuck humble, I'm right!).  Wrestling T-shirts are an invaluable marketing tool for any wrestling star.  Not only do you get fans to pay to advertise you to the world, if a T-shirt design is particularly eye-catching and memorable it can elevate that wrestler in the eyes of the fans (and management).  Think of how many times you watched a RAW or Nitro and saw a sea of Austin 3:16 or nWo shirts in the crowd.  The T-shirt can help make the star, especially if it sells like hotcakes and the company has no choice but to push the wrestler.  Generally speaking the best shirts in my opinion are either very simplistic and easy to spot, or tastefully pay homage to existing pop culture imagery.  It also helps when the wrestler himself frequently wears the shirt, giving the garment an air of authenticity (In fact every entry on this list falls into that category).  Here now is my list of the best wrestling T-shirt designs.... 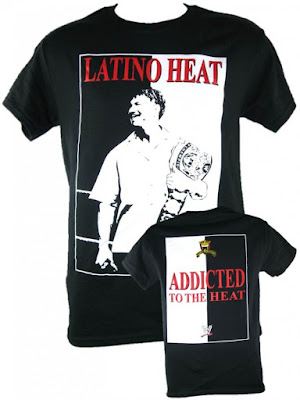 Our first entry is a play on the iconic poster for the film Scarface.  While I've never been much of a fan of this movie, the poster is one of the great pieces of cinema marketing, and Eddie's shirt uses this theme beautifully.  It also fits Eddie's character, that of the lying, cheating, stealing con man who makes no apologies for his win-at-all-costs mentality.  This was one of the few great shirts of the Ruthless Aggression era. 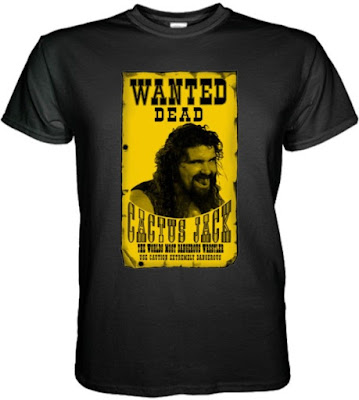 Speaking of a shirt befitting a character, how perfect is Cactus Jack's shirt displaying a Wanted poster for the crazed outlaw?  It worked so well in fact that when Mick Foley resurrected the Cactus persona in 1997 he actually wrestled in the shirt.  It's a simple design with an indie feel to it, and it encapsulates the violent, maniacal Cactus Jack character. 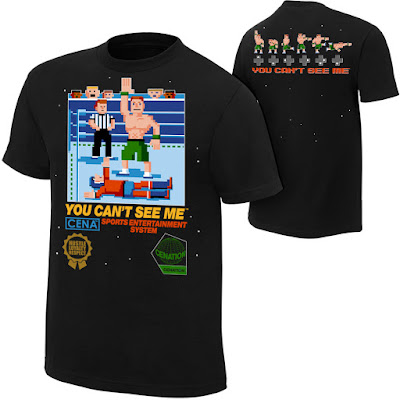 Another shirt that lifts its design from existing artwork, this one is based of course on the cover art for Nintento Pro Wrestling, one of the earliest and most beloved wrestling video games.  For years this was the go-to game for wrestling enthusiasts.  As you may recall, the WWF's early entries in the video game arena were quite lacking, but this game had serious replay value.  Anywho, Cena's shirt simply substitutes his likeness where Fighter Hayabusa's once resided, as he's about to drop the Five Knuckle Shuffle.  On the back we get images of Cena dropping the move, with control pad iconography below.  Just a brilliant play on the NES artwork and one of several very cool Cena shirts (I also love the Pabst Blue Ribbon one). 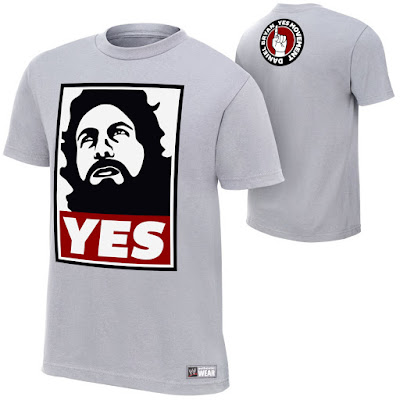 Daniel Bryan's YES movement in early 2014 was the closest thing we've seen to Steve Austin's meteoric rise in popularity.  Bryan became the symbol of the everyman underdog struggling against the WWE's political machine, and it was only fitting that his T-shirt should be a play on the 2008 Barack Obama "Hope" poster (itself designed by street artist Shepard Fairey).  Bryan's shirt represented the cockeyed optimism of his persona, that hard work and dedication will always pay off.  And the shirt sold like crazy leading up to Bryan's WWE Title win at WrestleMania XXX; a symbolic shirt for an unlikely folk hero. 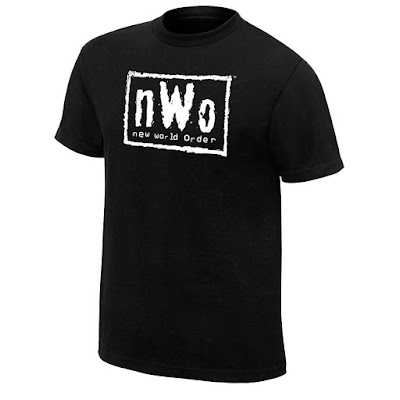 The one WCW shirt on this list made use of a marvelously simple design.  Just a logo, a stable name, and a rectangular border around it, done in the style of a crude stencil.  The nWo stable was one of the great bands of rebels in wrestling lore, and the shirt design reflected the anti-establishment, cult-like attitude of its members.  This shirt resembled something a fan might fashion using a homemade silk screen, not a marketing device mass produced by a corporation.  And did it ever work.  Every week on Nitro the arenas were FILLED with these shirts, and they became WCW's best-selling piece of merchandise by a country mile.  It's a prime example of less being more. Another gloriously simple shirt, Roddy Piper's "Hot Rod" T-shirt made weekly appearances on WWF television because Piper was always wearing one.  During his Piper's Pit segments and match entrances, you almost never saw Roddy without his archetypal T-shirt.  In fact I can't recall the WWF ever creating another shirt design for the guy.  This shirt was just so damn perfect.  White fabric, red trim, and the phrase "Hot Rod" emblazoned across the chest.  Genius. 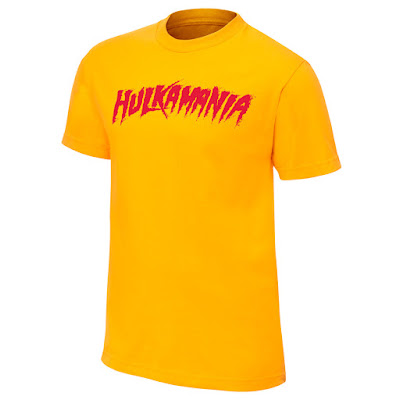 Another shirt you'd see all the time was Hulk Hogan's yellow tank top with red lettering.  It was a minimalistic design but it complemented Hogan's persona so well you'd think the guy was born wearing it.  Of course the shirt became part of his in-ring ritual, as he'd tear the garment off his torso before every match.  In the 80s the WWF sold an exact replica of the tank, back slits and all.  Then when Hogan returned in 2002 they morphed the design into a traditional T-shirt.  But whatever your preference, this iconic design has always been for me one of the most eye-catching. 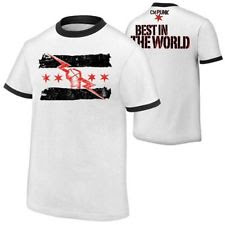 Much like Daniel Bryan, CM Punk's rise to prominence seemed to happen in spite of the company's best efforts.  After being marginalized for so many years, Punk vented his frustrations on a live microphone, and a grassroots movement was born.  For his first PPV appearance after this fateful promo (Money in the Bank 2011), Punk was given new entrance music - Living Colour's "Cult of Personality" - and a new T-shirt with Punk's straight-edge taped fist clutching a lightning bolt in front of the Chicago flag.  The shirt also stood out for its white fabric base, at a time when almost all wrestling Ts were printed on black backgrounds.  The shirt immediately sold in huge numbers and became the first design in years to outsell John Cena merch.  Punk's "Best in the World" shirt remains one of the coolest designs of all time. 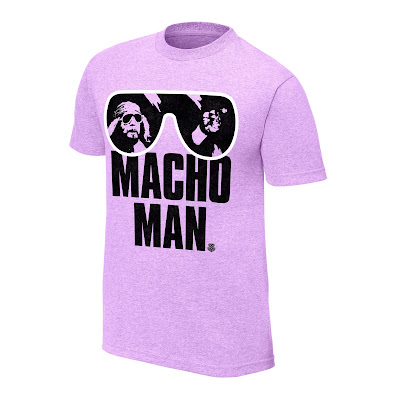 From a purely aesthetic standpoint this might be my all-time favorite Wrestling T.  Randy Savage's likeness inside a giant pair of sunglasses with his nickname in huge block letters displays incredible economy of design, and printing it on lavender fabric captures the unapologetic flamboyance of Randy Savage's character, matching his most frequently worn trunks at the time (WWE has since released orange, pink and green versions of this shirt as well).  It was the right design on the right color, representing the right character.  Amazing simplicity. 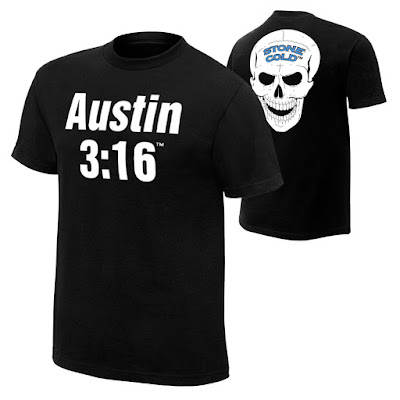 I said the Macho Man shirt was my favorite design purely based on how it looked, but no T-shirt in wrestling history has had the impact of Stone Cold Steve Austin's first shirt.  The design was born of a groundbreaking promo with an ad libbed line that became the most epochal slogan in the business, and helped Austin's anti-heroic popularity catch on like wildfire.  Within a few months these shirts were flooding every WWF arena and their sales helped bolster the company's sagging revenues.  As for the design itself, this shirt was unlike anything the company had put out before - no-frills, bluntly honest text on the front, with a smoking skull on the back.  This shirt changed the way the WWF designed their merch.  The 80s and early 90s WWF shirts generally featured bright colors, fancy fonts, and kid-friendly graphics.  Austin's merch, beginning with this shirt, pushed the envelope and redefined what constituted a cool T-shirt.  Soon just about every shirt the company sold was black with bold, simplistic designs and the occasional cuss word.  The Austin 3:16 shirt helped define the WWF's new philosophy, just like its wearer.  In terms of overall influence and significance, the Austin 3:16 shirt is the greatest in wrestling history.

Well that'll do it for this edition of Top Ten Things.  Comment below with some of your favorite shirt designs!


Posted by Justin Enuffa Ballard at 8:32 AM