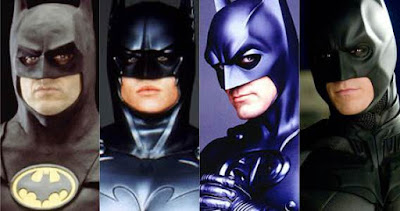 Batman v Superman gets released this Friday. I'm looking forward to seeing this flick with a mixture of awe and bewilderment. Part of me thinks it could be great but a bigger part of me thinks it's more likely to be a flaming shit burger. With this new chapter in the Bruce Wayne mythos coming out, I've come up with my list of the top Batman performances in screen history, with #9 being reserved for the worst.

Nevermind the myriad of problems with this legendarily putrid film ("Hey we cast Arnold, known for his bulgy muscles, lets stick him in a garbage can for the whole movie!"). The fact that George Clooney decided to just play George Clooney in this movie is baffling to me. He did nothing in this flick to make himself a memorable Batman. I wanted a dark knight and all I got was Danny fuckin' Ocean.

Yeah that's right, I haven't even seen Benny play this role yet and the son of a bitch is better than Clooney. Christ, he was bad.

In this shitty Batman movie, Mad Martigan plays a less crappy Bruce Wayne than Clooney. He's not bad in this but he's completely forgettable. And the movie SUCKS.

This one is based solely on visuals. In this fan film, Bats chases the escaped Joker and runs into some more trouble.  The Batman in this flick looks like he jumped straight out of an Alex Ross comic book cover.  Such a striking depiction of the Dark Knight detective.

In this insanely entertaining cartoon, Arnett plays Batman as a super over confident ladies man. Quick-witted and quick-fisted, Gob Bluth did so well as the block bat, they're making a full length Lego Batman movie due in for arrival in 2017.

My first (and countless others') exposure to a live action Batman, Mr. West was what I thought of when I thought of Batman for years. The show was purposely silly and was perfect for my adolescent mind, watching reruns of this every day after school. West was a cocky, goofy Batman, and I loved him.

Chris Nolan's films are, as the title suggests, a much darker and more realistic take on the Batman stories than the public had ever seen. As such, they needed a much darker and more realistic actor for the role. Enter Mr. Bale (In fact, and I expect no one to believe this, but after watching American Psycho back in 2000, myself and my estimable colleague Justin both declared Bale our perfect choice for Bruce Wayne). Bale nailed the Bruce Wayne part of the equation, but he loses points in my book for his overly gruffed-up Batman voice. Sounds like Clint Eastwood in Gran Torino. But his physicality and acting really brought some much needed gravitas to this "silly" comic book character.

The "wrong guy" to play Batman. That's what everyone thought back in 1989 when Michael Keaton was cast in Tim Burton's dark, weird flick.  But he nailed it. He was the perfect mix of serious and insane. He didn't have the build of later Batmen, but he made up for it in rubber abs! Keaton owned the Batman role and is ingrained as the Batman for a whole generation of fans.

The Lou Gehrig of Batman portrayals. Conroy has been playing Batman since I was 13 years old. He's who I think of when I think of Batman. The different vocal intonations that Keaton used in his Batman/Bruce Wayne performances have been perfected by Conroy in his three decades (three!) of playing the character. He has owned the character of Batman and chances are he's the voice you hear in your head when you think of the Caped Crusader.


Comment below with your picks!
Posted by Justin Enuffa Ballard at 12:44 PM