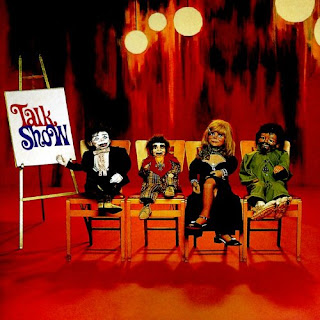 Back in the 90s, Stone Temple Pilots were one of the most popular bands around. Their biggest song “Plush” was impossible to run away from.  They had a huge hit with “The Big Empty” from The Crow soundtrack. They were everywhere…and then the band got sick of dealing with Scott Weiland’s drug problems and got themselves a new singer.

In 1997, Dean DeLeo (guitar), his brother Robert (bass), and Eric Kretz (drums) formed the band Talk Show with lead singer Dave Coutts, formerly of Ten Inch Men. They released their first (and only) album in late 1997. Being a devout STP fan, I felt this was a complete betrayal from the band and didn’t buy the album. Years later at Nuggets, a used CD shop near Fenway Park, I saw the disc for $2. By this point I was A FUCKING GROWN UP and realized that, yes, musicians can make music with different music-making people. So I bought it.

The album is very much Stone Temple Pilots with a different guy singing. The DeLeo brothers were at the height of their catchy tune writing. After STP’s albums Purple and Tiny Music, this album essentially perfects the sound they were going for on both those albums. The music is incredibly pop-sounding but also quite good. The lead single “Hello Hello” is hella catchy and is the highlight of the album.

Coutts is a very capable singer. He’s got a raspy crooner-type voice, very reminiscent of the vocal style Weiland went with in Tiny Music. With Coutts leading STP, they have a real Spacehog-esque sound to them. But…it just doesn’t gel completely. The biggest problem is that it sounds just like a Stone Temple Pilots album without the trademark Weiland singing. If STP hadn’t existed, this wouldn’t be a problem. The album and band would’ve been able to stand on their own. But it’s such a jarring difference from their former musical stylings. It never completely feels like its own thing. The album seems like a space-filler until Scott Weiland could get his shit together and the band could go back to their full-time gig. The DeLeos would form another band years later, Army of Anyone, with a new singer Richard Patrick from Filter, minus Kretz on the drums. That to me is a much more successful “STP without Weiland” album than this one.

Not to say this is a bad album. It’s a fine example of where alternative rock music was back in the late 90s.  It still gets some play in my house on my CD player (Yeah, I still got one, fuck you, I’m old). But without the esteemable vocals of Scott Weiland, the album and band have been lost in the annals of time. In fact, my friend and site founder Justin Ballard didn’t even know this band existed, and this is a man who made music FOR A LIVING. What a loser.
Posted by Justin Enuffa Ballard at 11:57 AM