And the Road to Shitsville continues.  Sorry, did I say "Shitsville?"  I meant "What Passes for  WrestleMania These Days."  This week's RAW featured two events of significance, noteworthy for very different reasons. 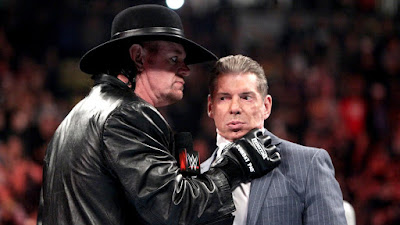 The first involved The Undertaker, who appeared on RAW to respond to the news last week that his match at WrestleMania this year would be against The Boss's Kid.  After an interminably long entrance, Taker listened to Vince prattle on for a few seconds before grabbing him by the throat and essentially saying, "Sure, whatever, I'll beat up your son at 'Mania.  But if I kill him it's on you, not me."  Really?  That's all the vaunted legend has to say about being forced into a match and used as a hired goon to do Vince's bidding?  No scruples about beating up a clearly lesser opponent?  No issues with his 'Mania match generally being a fairly epic encounter, or at the very least settling some sort of personal issue (Personal to Taker himself I mean)?  Nope, Taker's just gonna go along with this because he's got nothing else planned that day.  Not only that, this beloved hero to millions won't even take personal responsibility for whatever he does to Shane?  He's already absolving himself of any wrongdoing.  "Fine boss.  If your son never walks again it's your fault."  Not, "I'm not gonna break your son's spine just to settle your personal vendetta.  You got a problem with Shane, you deal with it."  What a fuckin' hero.  "But," you may be saying, "perhaps this is how they turn Undertaker heel."  To that I reply, "Hey dumbass, it's the fucking Undertaker in his home state.  Remember that other time they tried to turn a universally loved Texan wrestler heel - IN TEXAS - by aligning him with Vince McMahon?  How'd that turn out again?"

Nothing about this angle makes a single bit of sense.  None.  WWE is actually banking on a sold-out AT&T Stadium cheering like hell for a 46-year-old businessman to become the "2" in 22 and 2, joining Brock goddamn Lesnar in the I Beat Taker at 'Mania club.  If people were pissed about a legit MMA fighter and freak of nature like Lesnar beating Taker at WrestleMania, how do you think they'll react when Taker has to lay down for Vince's kid?  Did Vince and the creative team forget to take their pills this month? 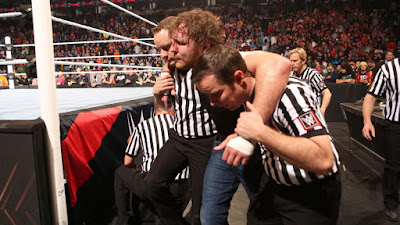 The other bit of significant business from RAW was Dean Ambrose getting all up in Triple H's grill and challenging him to a WWE Title match.  Hunter responded by beating a rain check into Dean's ass, and for the second week in a row the Cerebral Assassin laid out a top babyface.  Only difference is, when said babyface was WWE's top hero Roman Reigns, the crowd cheered Hunter like he'd just announced the Beatles were back together.  This week, Hunter's assault on Reigns' sidekick Ambrose was met with the appropriate crowd hatred.  So WWE.....what have we learned here, hmm?  Is it possible that maybe, just maybe, you're pushing the wrong goddamn guy as the company's flag bearer for the next decade?

Post-beatdown Hunter accepted Ambrose's challenge, and it was announced today that the two will meet on March 12th, at the newest WWE Network special, Roadblock.  So in other words, we're getting the WrestleMania main event we all wanted....three weeks early.  Now I'm as intrigued by this matchup as anyone, but it raises this question: What does WWE think is going to happen when Ambrose fails to close the deal on March 12th but Reigns gets the job done on April 3rd?  I once again fail to see the logic behind "The fans prefer Ambrose so let's get his WWE Title shot outta the way.  Then at 'Mania everyone will have forgotten about him and they'll love Reigns again."  How little does Vince McMahon think of his audience?  We're not stupid, sir.  When Hunter is still the WWE Champion at 'Mania and Roman Reigns is still the #1 contender, everyone's still going to react with apathy or scorn for Reigns.  WWE really just refuses to accept that the fans simply don't like Roman Reigns.  Vince lives in this fantasy bubble where things just magically work themselves out.  He's like a spoiled little kid who's so used to getting his own way he can't fathom that anything would ever not go as planned.


What's sad about all this is, Reigns could be an absolute mega-heel if they'd just listen to the audience.  Reigns could win the Title, show up on RAW the next night, and say "Ya know what?  I busted my ass for you people for three years and you didn't appreciate it.  So screw all of you, I'm gonna beat the everlovin' shit outta the guys you DO like."  Reigns could be a scary, ruthless bastard of a heel and it would draw truckloads of money.  Then both Ambrose and a returning Rollins could be lined up as babyface challengers.  How incredible would that be?  You'd also have the dynamic of Reigns and Rollins potentially each trying to sway Ambrose to their side.  Reigns would say "We're best buds, don't let the fact that I hate the fans get in the way of that."  Rollins could say "I know I screwed you over a couple years ago but I'm a different guy now, and we have to stop this monster called Roman."  Tons of intrigue there.

Nope, Roman's the new John Cena.  Don't like it, go watch something else.