1. The Undertaker once again confirmed he's fine with being Vince's bitch.  Shane literally pointed out as much to his face, and yeah, Taker chokeslammed him, but he's still going through with the match, isn't he?  I've asked the question before, but why in the name of Jeebus would Taker agree to participate in this nonsense, onscreen or off?  In the storyline, why would Taker want to work on behalf of Vince and The Authority?  Does Taker fundamentally agree with their management style at all?  Is Taker a believer in the idea of a ruling class?  Does he like their constant screwing over of all the babyfaces?  From a storyline perspective nothing about this makes sense.  From a backstage perspective it makes even less.  Why would Mark Calaway, who in recent years has prided himself on having potential show-stealing matches at WrestleMania, agree to fight Vince's non-wrestling son?  And yeah, I know Shane has a history of crazy stunts and all that crap, but let's be real.  The man is 46 years old, and WWE is not the company it used to be.  The days of Shane flying through windows and jumping off the Titantron are over.  What we're left with is likely a very tame, unnecessary Hell in a Cell match with pretend-control of the company at stake.  I keep seeing people posting stuff like "I can't wait for Shane to take control and fix RAW!"  Guys, you realize he's not actually taking over the company if he wins, right?  This is all an angle.  Vince will still actually be in charge, making the same stupid decisions he's making now.  So this debacle is all for nothing.  Remember the last time The Authority was ousted from power?  How long did that last again?  Two months maybe?  I'm also seeing rumors that Shane vs. Taker could CLOSE THE SHOW.  So lemme get this straight: CM Punk wasn't good enough to main event WrestleMania, but Vince's kid is?  Fuck off. 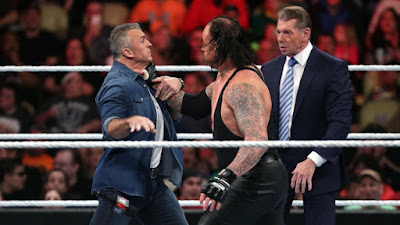 2. Roman Reigns is back!  And as unpopular as ever.  Reigns returned to RAW last night to get himself a little payback for Triple H's beatdown a few weeks ago, by doing the exact same thing to Triple H.  And once again the crowd didn't care for Roman's shenanigans.  I can't ever remember a less popular top babyface.  Diesel is about the only one who comes close, and even he had fairly solid crowd support once he reunited with the white-hot Shawn Michaels.  Reigns got justifiably violent revenge on the top heel in the land, and no one cared.  Also, this echoes something WWE did in the lead-up to WrestleMania 25, when babyface Champion Triple H broke into Randy Orton's house and beat the piss out of him in front of his wife.  This just three weeks before the biggest show of the year, for which fans were expected to shell out $55 to see Triple H get his hands on the dastardly Orton.  Except we already saw it.  On free television.  Triple H kicked Orton's ass literally all over his house and then threw him out the front window.  So what could Hunter possibly do in a sanctioned, traditional wrestling match three weeks later?  WWE followed up a savage home invasion with a tame wrestling contest in which Triple H would lose the WWE Title if disqualified.  Boy, now I'm on the edge of my seat.  And this is exactly what we have here.  Roman Reigns already got revenge for Hunter beating him up three weeks ago, by beating up Hunter.  So the match at WrestleMania is more or less superfluous except for the fact that Hunter's still the Champion.  But as booked, this feud has mostly been about a personal vendetta, not the Title.  So what are we tuning in for in three weeks?  A civilized athletic contest?  This approach to hyping a big PPV match is totally backwards.  The babyface should get beaten down and then attempt to get revenge for weeks only for the heel to escape unscathed.  OR, the babyface should say "I could kick your ass all over this arena tonight but I'm gonna wait till WrestleMania when the Title's on the line."  It's pretty simple 101 booking formula, and it's only ever worked ALWAYS.  Stop trying to reinvent the wheel, for Chrissake. 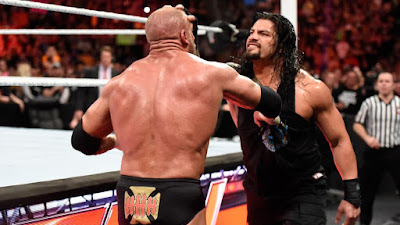 3. Poor Dolph Ziggler.  I know he's pissed off management several times with off-hand Twitter comments, but that guy is more or less perfectly justified at being a disgruntled employee.  WWE has shown zero long-term commitment to setting Ziggler up for success in the 7 years he's been on TV as that character.  He's gotten over completely on his own, and the one time they actually pushed him like a big deal (in 2013 when he cashed in on Alberto Del Rio for the World Title), he was sidelined with a concussion....and then PUNISHED FOR IT.  So Ziggler's big segment last night involved him standing up to The Authority (only to be emasculated by Stephanie McMahon with a slap to the face), and being told he could have a match of his choice at WrestleMania if he beat Triple H.  So this perennial crowd favorite can't even count on a match at the biggest show of the year unless he beats the unbeatable WWE Champion?  Had Ziggler wrestled during the Attitude Era though, he'd probably be booked against Taker right now.  Ziggler of course lost to Triple H and is almost certainly going to be shoehorned into either the Andre Battle Royal (which has already outlived its usefulness) or the inevitable multi-man Intercontinental Title match (which is an insult to the Title, the Champion, and all six or seven participants).  I realized something last night - Dolph Ziggler has never had a one-on-one match at WrestleMania.  How fucking sad is that?  His first 'Mania was 26, where he was involved in Money in the Bank, at 27 he took part in the ill-conceived six-person tag with Snooki, at 28 he was part of the 12-man tag pitting Team Johnny Ace vs. Team Teddy Long, at 29 he got a six-minute Tag Team Title shot, at 30 he was in the Battle Royal, and last year he was in the 7-man Ladder Match.  Considering how popular Ziggler is it almost seems like an act of sabotage that he never gets a real 'Mania match.  But ya know, brass rings.  Millennials.  Shit like that. 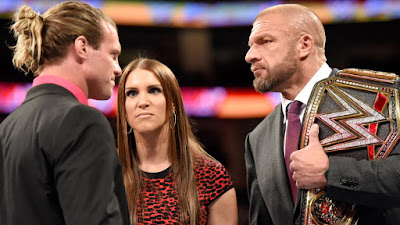 Neville has joined the long list of injured stars.  That sucks since his involvement in a 7-man Ladder Match (or whatever they had planned for him) would've made for some memorable spots.  Then again he's been buried almost the entire time he's been on the main roster, so sadly being off TV for six months is probably a good career move.

The Usos vs. The Dudleys was signed for 'Mania.  Anyone give a shit?

The Andre Battle Royal has been officially announced but no participants have been named.  Anyone else think they're gonna basically wait until THAT DAY to tell us who's in this thing?  Hell, they did that for last year's Survivor Series matches.

AJ vs. Jericho IV still hasn't been officially announced, but I have to think it's some kind of gimmick match.  Submission, 2/3 falls, something.  They can't possibly just give us a fourth regular singles match, right?

What an absolute shitshow this WrestleMania's gonna be.  If this show's even as good as WrestleMania 13 it'll be a goddamn miracle.  Thank Christ for NXT is all I can say.


That's about enough griping for this week.  Thanks for reading!  Comment below....
Posted by Justin Enuffa Ballard at 12:49 PM