Welcome to another edition of Awesomely Shitty Movies, here at Enuffa.com, where I examine the pros and cons of an entertaining-but-stupid movie.  Oft-times it'll be an old film I liked at the time but later discover to be pretty shabby.

Such is the case with today's entry, Bill & Ted's Bogus Journey! 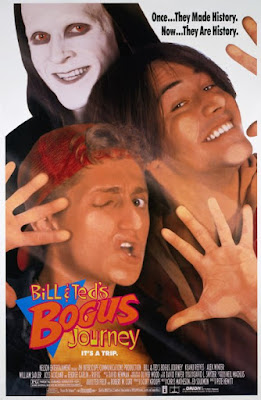 In 1988 the world was introduced to two lovable dunderheads with a taste for hard-rockin' music, Bill S. Preston, esquire, and Ted "Theodore" Logan, who as it turns out were destined to change the world with their special brand of heavy metal, if only they could pass their History exam.  With the help of a futuristic mentor and a time traveling phone booth, these two dummies saved the day and secured their future.

Fast-forward three years and our (second) favorite pair of dopey cinematic metal dudes were back, this time fighting for their very lives against evil robot clones created by Chuck De Nomolos, a futuristic heavy with designs on retroactively altering the timeline.  Hmm, evil robots sent back in time to kill the protagonist?  That premise sounds oddly familiar.

So what worked about this silly sequel and what didn't?  Let's zoom in for a closer look...

Where Excellent Adventure had a very lighthearted, pretty small-scope time travel premise (Bill and Ted need to travel through time and recruit various historical figures for their high school history project to avoid flunking out and derailing their rise to global fame), the second film ups the ante by having the aforementioned evil robots actually kill our heroes, allowing the filmmakers to show us what heaven and hell look like.  Conceptually this is a really fun story with lots of room for imaginative visuals and afterlife-related gags.  Bill and Ted spend over half the movie as wayward spirits and we get to explore various mythical and surrealistic locations with them.

My all-time favorite standup comedian returns as Bill & Ted's futuristic mentor Rufus, and while his comedic talents are sadly wasted in this franchise, he's always a welcome onscreen addition.

Ackland made a splendidly loathsome villain in Lethal Weapon 2, and he does so again here, albeit as a comedy straight man to the dimwitted Bill & Ted robots.  A veteran of the screen, Ackland's presence lent instant credibility to this over-the-top farce.

This was one of the first all-metal film soundtracks I was ever aware of (I think Shocker might've been the first), and I was ecstatic about bands like Megadeth and Faith No More being featured in a major film.  Sure it also included poser bands like Winger and Slaughter, but the hard rock window dressing added a sense of authenticity to a movie about two halfwit rock n' rollers.

Far and away the best thing about this movie was Bill Sadler in the role of Death.  I've enjoyed Sadler's work in pretty much everything I've seen him in, from Die Hard 2 to The Shawshank Redemption to a couple episodes of Roseanne.  He can skillfully play a stuttering chump or an icy, hardened terrorist and make it work.  In this film he tackles the cartoonish Death role mostly with a dry, understated straight-man approach in contrast to the buffoonery of the two leads, affecting an Eastern European accent that enhances the character's comedic value.  Lines like "Don't overlook my butt" and "You have sunk my Battleship" should come off like hammy trailer fodder, but Sadler's restraint makes them work perfectly and he ends up supplying most of the film's best laughs.  Only during the film's climax, when the Death character becomes overly jolly and goes for obvious one-liners (betraying the tone set throughout the rest of the film), does the performance falter.

Now for the stuff that doesn't work.....

Dude, I get that Bill and Ted are most bodacious dudes, dude, but dude how many times did the writer dudes need to squeeze the word "dude" into this script, dude?

See Here's Why This Is Funny...

At times the writers seem so desperate to garner laughs they include dialogue that's little more than a running commentary of the visual gag.  Like when Evil Bill removes his head and tries to play basketball with it, and accidentally catches it on the ceiling fan.  By itself this is a jarringly funny moment, but then it's punctuated (ruined) by Evil Ted remarking, "You totally didn't see the fan!"  Umm, yes Ted, we can see that.  That's what eyes are for.  The joke was funny till you called attention to it.  Dick.  Right after that, Ted picks up Bill's head, while Bill's body charges at him.  Bill's head then says "I'm totally gonna tackle you dude!"  What the hell, guys?  Is this a fuckin' radio show?  And during the "ghost possession" scene, Ted's ghost takes over his father's body, and in response to Bill's line, "You totally did it, dude," says, "I totally possessed my dad!"  I'm pretty sure this line was specifically written just so they could include it in the trailer, as it's 100 percent unnecessary and 1000 percent unfunny.

Along those same lines, some of the jokes are simply trying too hard.  I get that this is a goofy romp but a good comedy writer needs to know when to exercise a little discretion when crafting jokes.  One-liners like the evil robots saying "We're total headbangers" while playing basketball with their own heads, or "We're total metalheads" when revealing they're robots (cuz see, they're made of metal, get it?), are groan-inducing rather than funny.  And having basically every character do the little air guitar bit got awfully tiresome by the end.

What the fuck is with the word "station" being all over this movie?  Were the writers trying to start a new bit of slang, or was this actually a thing in the early 90s and it just never made its way to the east coast?  At no time do I ever recall as a teenager hearing the word "station" used to mean "cool," or "rad," or "pickled hot sauce," or whatever the hell it's supposed to mean in this film.

Overall Bill and Ted's Bogus Journey is a case of a movie that was great for its time but doesn't hold up 30 years later.  Where the first film was pretty chock full of genuine laughs, the sequel ultimately relied too much on gags and satirical hard rock tropes that made the first one work, rather than inventing new stuff.  Visually it's more exciting than Excellent Adventure, but it tries too hard to duplicate that film's jokes, playing too often to the cheap seats.

-Roy Brocksmith, who plays Deputy James, delivers an embarrassingly bad performance during the scene where he and Ted father are possessed by the deceased Bill & Ted.  Hal Landon Jr., who plays Captain Logan, fully commits to the act of being possessed by his son, playing up Keanu's surfer-esque accent to the hilt.  Brocksmith however looks like he's trying not to laugh half the time and makes basically zero effort to sound like Alex Winter.  I know this is a minor scene but it always bugged me.

-I'm not sure why they had to recast Ted's (and Bill's) girlfriend, but could they not find a single brunette actress who could do a halfway decent British accent?  Annette Azcuy's is the worst I've heard since Kevin Costner in Robin Hood (which came out only a month earlier, so I guess that's not very going far back, but still....).

-Also, the filmmakers apparently didn't bother to re-watch the first film when writing this one, because the Princesses names are swapped in this movie!  Bill's redhead girlfriend was Elizabeth and is now called Joanna, and Ted's brunette girlfriend was Joanna and is now Elizabeth.  Nice work fellas, did George Lucas help you with the script?


-The time travel stuff throughout the movie, like De Nomolos periodically checking in on the robots' progress despite being hundreds of years in the future, doesn't make any sense.  In fact, from his point of view, the future should've already changed once the robots were sent back in time, if they succeeded in their mission.  This "ripple effect" concept is the basis for much of the climax, where Bill and Ted say they're going to escape, set up things like a cage and a sandbag to stop De Nomolos, and time travel back to the present.  Again, I know this stuff isn't supposed to be taken seriously, but if they're able to escape De Nomolos in the first place, why do they need to set up stuff to trap him the second time?

-After attempting to crash a seance as spirits in limbo, Bill and Ted are cast into hell and each end up in their own personal nightmare.  Ted's involves stealing his brother's Easter basket and being chased by the Easter Bunny(??).  He says "This was ten years ago," so clearly it's implied this episode actually happened to him and was not a dream he once had.  I know there's a lot of impossible stuff going on in this franchise, but really?  Ted was actually reprimanded by a fictitious talking rabbit, and THAT was his worst memory?


-Death actually joins Wyld Stallyns??  Doesn't he have other duties to attend to?  When did he learn to play bass?  Judging by his technique during their performance he doesn't know a damn thing about music.

-Death and Station don't seem to participate in the intensive 16-month music training the human characters go through, yet when Bill, Ted and the Princesses return from their excursion, they're fully aware they're now in the band, plus they have instruments already set up for them.  Where'd the upright bass and bongos come from?

-De Nomolos hijacks every TV signal across the globe, but no one's even heard of Bill & Ted at this point, so if anything he's just helping them become famous.

-Finally after much buildup the band starts playing a song, which turns out to be Kiss's rendition of "God Gave Rock n' Roll to You."  Umm, who's doing the singing in this scene?  Why are Paul Stanley and Gene Simmons' vocals being piped in?  Why weren't Wyld Stallyns disqualified for using flown-in vocal tracks??

So yeah, as a 15-year-old metal dude I was a huge fan of this film and its darker elements, and for a while I actually preferred it over its lighter predecessor.  But upon rewatching them I found that Excellent Adventure still made me laugh, while Bogus Journey more often than not felt like an ambitious but ultimately lethargic attempt to recapture the magic.  Aside from Bill Sadler none of the characters or their mannerisms felt fresh, and while I like the afterlife exploration it's really just one long setup to get them to the Battle of the Bands and the fairly anticlimactic showdown with De Nomolos.  25 years ago I was hard-pressed to answer the question, "Who's better, Bill & Ted or Wayne & Garth?"  Now it's a no-brainer.  Wayne's World and its sequel still hold up for me, while this movie does not.