Welcome to another Awesomely Shitty Movies, here at Enuffa.com! 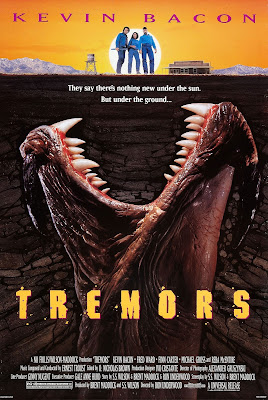 Today's movie is the 1990 horror-comedy Tremors, directed by Ron Underwood (of City Slickers) and starring Kevin Bacon and Fred Ward.  Tremors takes place in a tiny Nevada settlement called Perfection (population 14) that gets attacked from below the ground by four gigantic sandworm-like monsters that reach through the turf and pull down anything that seems appetizing.  After the only road in or out of town gets blocked by a rock avalanche, the survivors must find a way to the mountains to avoid getting eaten.

I'll level with ya - the word "shitty" doesn't really apply to Tremors.  There's very little about this film I don't like, but I'm including it because it's just a really fun, silly B-movie, one I would describe as a "great piece of crap."  So no offense meant, Tremors fans.  I'm really just here to talk about the film's merits as an old-school piece of drive-in fare.

Kevin Bacon and Fred Ward have tremendous chemistry as our dual protagonists.  Earl is the grizzled pragmatist, while Val is still holding out hope for a better situation and a new love interest who fits exactly his description of an ideal woman.  Together they're the brains and muscle of the town of Perfection, keeping everyone's stuff in order and doing whatever odd jobs they're needed for.  They're also the audience's guides through this adventure.

I've been a huge Michael Gross fan since his Family Ties run, where he played the optimistic, sentimental dad.  For most fans of the show Michael J. Fox was the star, but I always found Stephen Keaton funnier.  Here Michael is a very different character - an over-the-top gun enthusiast/survivalist who never met a firearm he didn't like (or purchase, judging by his vast arsenal).  While Stephen Keaton and Burt Gummer could not be more diametric opposites, Gross delivers excellent performances in both cases.

The special effects in Tremors wouldn't win any Academy Awards, but for a fun little B-movie, these work great.  The Graboid monster design was simple but got the job done just fine.  There was a real sense of danger and at no time watching this film was I ever thinking, "Wow, what a fake monster."  The effects are just realistic enough to keep your disbelief suspended, plus there's just enough gritty blood n' guts to satisfy any horror fan.  I miss the days of messy, practical horror effects.

The filmmakers wisely followed the Jaws formula, where the monsters are hinted at for most of the first hour but hardly shown at all.  We get to see what havoc they cause and thus the threat feels palpable and genuine, but for the film's first half it's all just suggested.  Thus we get to build up in our minds the menace of the creatures, and when they're finally shown we fear them.

Early in the movie they build up the first appearance of geology student Rhonda LeBeck by having Val list off every physical trait he's hoping to see when he meets her.  Then she appears and she looks nothing like his prototype (She's a bit frumpy and has a bucket hat and sunblock on her nose), and Earl points out he's never gonna meet anyone if all he cares about is ticking off those boxes.  Throughout the movie Rhonda becomes more and more attractive to Val (and the audience), and it's clear they're developing chemistry together.  This was a nice departure from other films of the genre where the love interest was a ditzy model-type.  Rhonda is very intelligent and capable, contrary to what we'd been conditioned to expect from horror/action films in 1990.

This movie never gets too bogged down by the horror elements; it's kept lighthearted and humorous, which sets it apart from similar monster movies.  It's rated PG-13 so there aren't any really graphic deaths and most of the gore is from the monsters themselves.  Plus there are a lot of good laughs and we really like most of the characters and thus care about what happens to them.  Plus, the characters officially name the monsters "Graboids."  Fuckin' GOLD.

The performance by Bobby Jacoby as the teenager Melvin is pretty grating.  Jacoby's delivery never really rings true, and besides that the character doesn't have much purpose at all.  They could've left this kid out of the movie entirely and it'd be the same movie.  I guess that's true of several of the characters, but I especially could've done without Melvin.  Whiny little prick.  Also this kid's like 15 years old and as far as I can tell lives by himself.  Where are this asshole's parents and why'd they saddle this one-horse town with taking care of him?

-The scene where the doctor and his wife get eaten breaks one of the worst rules of horror cinema.  Upon learning their generator got sucked under the ground and then witnessing its power cord following suit, Jim's wife is all, "Okay Jimbo, that's our cue.  Let's get in the Dodge and get the fuck outta dodge."  But Jim just sits there for several seconds wondering about sinkholes or some shit, and gets yanked right under himself, along with the car keys.  So Mrs. Jim can't drive away once she's inside the vehicle, and the whole kit n' caboodle gets pulled under the earth with her in it.  There's an old saying: He who hesitates is a stupid asshole.

-Val and Earl bring back a severed tentacle from one of the Graboids and Walter pays them fifteen bucks for it so he can charge customers three clams each to pose for a photo with it.  Um, Walter?  There's only 14 people in this middle-of-nowhere town, including yourself.  Two of those 14 residents sold you the thing, so they're probably not gonna part with the six bucks either.  And four others have been killed already (Edgar, Old Fred and the Wallaces).  That leaves you a maximum of 21 dollars you could gross selling pics with the tentacle, that is IF everyone else in town actually wants one (which is highly doubtful).  Not a terribly savvy businessman, are ya Walt?

-After being stuck on a large rock overnight with Val and Earl, Rhonda conjures the idea to pole vault across the chain of rocks to her truck so they can all drive back to town.  Good thing those wooden poles just happened to be lying next to the rock you guys were on.  Where the hell'd those come from?  And why'd it take you twelve hours to think of using them?

-Just after the whole town realizes they're trapped inside the General Store, they see Mindy (Ariana Richards of Jurassic Park fame) pogo-sticking down the street and Val runs out to rescue her before she gets eaten.  He tackles her to the ground but her pogo stick stays upright for a solid five seconds before being sucked underground.  What'd it have Crazy Glue on the bottom?


-There's a great scene where Perfection's resident gun crazies Burt and Heather encounter a Graboid in their basement and they spend roughly ten minutes pluggin' it fulla lead before Burt finally kills it with an elephant gun.  Only thing is, in this confined space, after that many rounds fired off, both these ammosexuals would be deaf as Beethoven.  Good luck hearing anything on that CB radio, jerks.

-Multiple characters are guilty of this, but Earl especially throws around "plan" like he just invented the word.  It's insane.  "Sounds like they're comin' up with a plan."  "We need a plan."  "Nobody panic - it's all part of the plan..."  Wait, that's from something else.  Anyway, could someone get this hick a goddamn Thesaurus??

So there you have it.  There's very little wrong with Tremors and it's always a fun way to spend 95 minutes.  It's a good old-fashioned dumb monster movie with a buncha likable characters, some good laughs, and mostly serviceable performances.  The action set pieces are generally quite believable and grounded and they come about organically.  Imagine if this were remade (Please for the love of fuck, don't remake Tremors!)?  It'd be 135 minutes long, there'd be an extended 25-minute chase sequence through the desert and Val would kill one of the Graboids in a fistfight or something equally inane.  I miss the days when action and horror movies were simple and to-the-point.


That'll do it for this edition.  Stay tuned at Enuffa.com for more Awesomely Shitty Movies!

Posted by Justin Enuffa Ballard at 8:39 AM