Welcome to another edition of Awesomely Shitty Movies, here at Enuffa.com!  For those who haven't joined us for one of these, I take a movie with both good and bad aspects (or awesome and shitty ones), and separate them from each other.  Put each of them in "timeout," if you will. 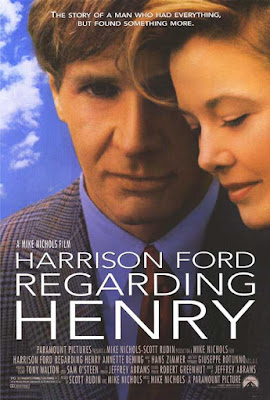 Today's subject is the 1991 melodrama Regarding Henry, starring Harrison Ford and Annette Bening and directed by Mike Nichols.  Regarding Henry is the story of a hotshot jerk lawyer who's the MVP of his firm but who doesn't have much of a relationship with his wife or daughter.  Henry is the victim of a shooting, which leaves him with retrograde amnesia and a childlike personality, and he has to put his life and relationships back together from scratch.  Feel-good feelies ensue....

The film has elements about it that work and most certainly some elements that don't.  It received mixed reviews and failed to make much of a splash at the box office, but it's still affectionately remembered as one of Harrison Ford's more touching roles.

So here I am to lay out the pros and cons of this intriguing but very flawed film....

I'm a huge Harrison Ford fan.  Always have been.  I'll watch just about anything with him in it, and in 1991 I made it a point to do so.  His natural, effortless performance in this film carries it a pretty long way.  Had a lesser actor (Bill Pullman for example) been cast in this role the movie would've fallen right on its stupid face.  In the first act Ford plays a very convincing self-important asshole (which makes me wonder why he hasn't been cast in more villainous roles), and after the shooting he slips right into the simple-minded version of Henry.  We care for him a great deal in spite of his earlier transgressions.  Ford does more with facial expressions than just about anyone in the business, and he makes the material work about as well as it can.

Bening was an emerging star at this point and her turn as Henry's wife Sarah is fully believable and heartfelt.  When Henry's a successful, unscrupulous lawyer Sarah is basically a kept woman who seems at ease with this business-like relationship, and later she takes on the burden of becoming the breadwinner/caretaker of the household.  We feel this new, overwhelming stress weighing on her and the performance rings true.  Bening and Ford have great chemistry that holds the film together, even when the script shortchanges them.

Henry's physical therapist Bradley is an extremely likable character who provides several moments of humor and levity, and later consoles Henry over a beer after Henry discovers he's now the subject of ridicule from his former friends and colleagues.  The earlier scenes are amusing and the latter is pretty touching.  No complaints about the Bradley character or Bill Nunn's performance.

Mike Nichols films usually contain dry, sardonic humor, and Regarding Henry has a healthy dose of that, plus some cheap laughs, to at least keep the film entertaining.  Ford's deadpan delivery of most of the jokes fits the film's "dramedic" tone just fine.  If you aren't going to make a deep, philosophical drama, at least the laughs will keep everyone engaged.


So a few things worked for this film, but let's see what didn't....

The filmmakers had the chance to deal with heavy issues, like how Henry's condition would affect the family's financial situation, his career, his relationship with his daughter, and his intimacy with his wife.  Instead though they went for easy emotional payoffs and sometimes shoddy laughs.  This film is aimed at a pretty low common denominator when it could've been a sophisticated, grown-up drama.

I was shocked to learn JJ Abrams wrote this.  He sure has come a long way as a screenwriter huh?  His early credits include this bargain-basement tearjerker and the unmitigated calamity that was Armageddon.  Regarding Henry is so full of dumbed-down dialogue it's often embarrassing.  Turning the "Say when" moment when Henry's getting milk poured into his coffee into a metaphor for quitting his job was positively groan-inducing, as was his line late in the film, "I want us to be a family....for as long as we can, Sarah."  I know he's got brain damage, but does anyone talk like this?  Another example of a lame-o payoff is our next entry....

During Henry's convalescence the first word he learns (remembers how) to say is "Ritz," which his therapist Bradley assumes to mean he wants Ritz crackers.  Henry even paints half a dozen still lifes of the cracker box.  But later we learn that word was on his mind because he was having an affair with a coworker, and their regular rendezvous point was....that's right, The Ritz-Carlton.  Jeezus H. Christ.  If his side action Linda was so urgently on his mind at the time, wouldn't he have said her name rather than the name of the venue where he was playin' Tickle the Weasel?  Or at least painted the crackers to look like her boobs?

Henry's condition quite obviously leaves him unable to do his job as a lawyer, and even though the firm lets him continue working there, sort of, Sarah notes that their financial situation is pretty dire.  They opt to move into a smaller apartment, but that could scarcely have solved all their monetary woes, particularly since Henry quits his job late in the film.  Yet the entire subplot just gets dropped and we never hear anything about it again.  But it's okay because he's reconnected with his family.  Isn't that nice?

-The armed robber (John Leguizamo) who holds up Henry is awfully impatient.  Upon being ordered to give up his wallet Henry hesitates for like two seconds and the guy just shoots him.  Henry stammers for a sec, and the guy shoots him again and runs away WITHOUT TAKING HENRY'S WALLET.  Not a very profitable racket he's got there I'm guessing.

-The second half of the film partly involves Henry going back to his final case file and discovering he and his firm covered up evidence that would've doomed their client, and this causes a crisis of conscience for Henry.  So wait, Henry's got a child-brain but he still understands complex legal documents and procedures?  Man, this disability is super selective huh?  It's almost like it only affects Henry when the script needs it to.

Regarding Henry is at its core a guilty pleasure.  It's a second-rate melodrama with a first-rate cast, that could've been serious Oscar-bait with a better script and a director who wasn't phoning it in.  It's one of those films I know I shouldn't have any desire to see again, but if I bump into it on Netflix or something I hafta put it on for an hour or so.  I guess it must be the performances that bring me back, because there sure ain't much goin' on with the story.


Anyway, that'll do it for this edition of ASM.  Comment below with your thoughts, and thanks for reading!