Movies of Disbelief: Raiders of the Lost Ark (1981)

Welcome to another installment of Movies of Disbelief, here at Enuffa.com, where I examine one aspect of an otherwise okay or even a great film and discuss why it sticks in my craw.

Today's subject is one of my favorite movies of all time, ALL TIME.  It's the action film I hold above all other action films, and the one that solidified Harrison Ford as my first childhood hero.  I'm talkin' about Raiders of the Lost Ark! 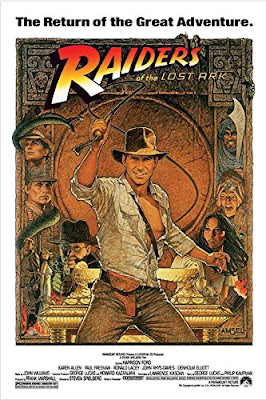 The brainchild of George Lucas, Raiders was conceived around the same time as the original Star Wars, with Lucas paying homage to the adventure and sci-fi serials he enjoyed as a kid.  Both ideas began to flourish simultaneously but he set aside the earthbound action-adventure one and concentrated on what would become the most enduring sci-fi/fantasy franchise of all time.  Once Star Wars became the phenomenon it did, Lucas then turned to his other big idea, revealing it to his buddy Steven Spielberg after Steve suggested he'd like to direct a James Bond film.  Lucas replied, "I've got something better - The Adventures of Indiana Smith!"  After Lucas finished describing the concept in detail, Spielberg said he was all-in except for the name.  Lucas then suggested "Indiana Jones," and history was made.

Raiders of the Lost Ark was a masterful swashbuckler, chock full of iconic action set pieces and led by an equally iconic lead performance from Ford, whom Lucas initially wasn't even considering for the role, fearing that the actor-director pairing would be the popcorn version of Deniro-Scorsese.  Tom Selleck was eventually chosen as the world-traveling archaeologist, but ran into scheduling issues due to his Magnum PI commitments, and Spielberg again suggested Ford.  Had it not been for Magnum we'd have ended up with a very different movie.


Anywho, Raiders was the first movie we bought on VHS when I was a kid, and I watched it literally every day after school for months.  Along with the original Star Wars and The Road Warrior, Raiders is one of the films I've seen more times than any other (I'm guessing it's over 100 at this point and I could damn near recite the whole thing verbatim).  Like basically all boys in the 1980s I wanted to BE Indiana Jones, and Harrison Ford was my idol (no pun intended) till I discovered wrestling.  I still consider Raiders to be the perfect action film and it's one I'll never grow tired of.  Hell, it's my favorite Spielberg film, and that covers a lotta ground.


So why am I talking about it in this context?  Wellsir, there's one bit of dialogue in the film that really chaps my buttocks.  The scene is the one where Indy and Sallah are consulting an Egyptian expert about the markings on a gold medallion that will hopefully tell them the secret location of the Well of Souls (the resting place of the Lost Ark), based on the height of a staff.  The eccentric old man reads the markings and says "This means six kadam high," and Sallah says "about 72 inches."  But then the old man turns over the medallion and reads more markings: "And take back one kadam to honor the Hebrew god."  Indy and Sallah giggle triumphantly as they realize their nemesis Belloq's duplicate medallion only had markings on one side, missing the last crucial bit of information, and thus his staff is about a foot too long.

So let's do a little math.  If six kadam = roughly 72 inches, one kadam is about 12, right?  So five kadam would be about 60 inches, or five feet.  But then in the Map Room scene Indy is using a staff that towers over him by about a foot.  Now look, I can buy a magical gold chest that melts people into candle wax when they look inside it, or a sealed, centuries-old tomb where thousands of snakes still live, or even a college professor being able to perform a death-defying, 360-degree action sequence on a moving truck (which is fucking BADASS, by the way).  What I do not accept is that the laws of math and physics cease to exist in the municipality known as Cairo.  If a kadam is about the same as a foot, then either that goddamn staff Indy's using is seven feet high or Indy is only four feet tall.  All that needed to change here was a couple lines of dialogue.  "And ADD one kadam."  "Belloq's staff is too SHORT!"  Problem fixed.  What the FUCK, Steven??? 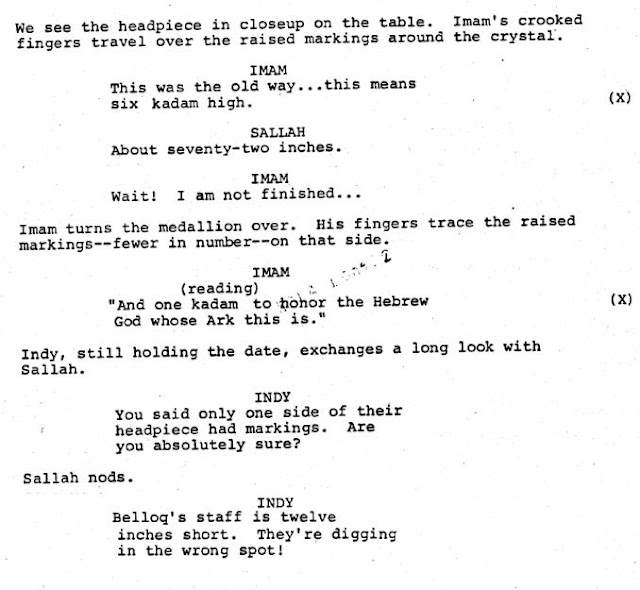 WHAT THE FUCK, STEVEN???

Posted by Justin Enuffa Ballard at 9:58 AM