Welcome to yet another edition of Top Ten Things, where I pick my ten favorite of somethingorother....

Today what's on my mind is the classic British sitcom Fawlty Towers, one of my all-time favorite comedy series.  Created by John Cleese and then-wife Connie Booth, Fawlty Towers takes place in a shoddy English hotel run by an eminently rude, impatient man and his rather domineering wife.  Supported by a clever, quick-thinking waitress and a bumbling Spanish waiter, the hotel and its staff get into various misadventures and hilarity ensues by the truckload. 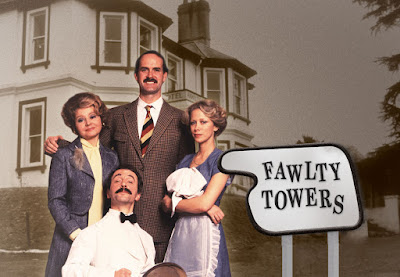 Cleese's inspiration for Towers was a hotel called The Gleneagles, where he once stayed with the Monty Python cast.  Flabbergasted by the rudeness of its owner Donald Sinclair, Cleese mined this character for all the comedic material he was worth, and in the process created an incredibly funny, highly influential series.  As with most British sitcoms each season consisted of only six episodes, and Cleese and Booth only made twelve total, with a four-year lag between seasons.  This means of course that only two episodes failed to make this list of ten - "The Builders" and "The Kipper and the Corpse."  Don't get me wrong, there's nary a bad episode of this show, but for one reason or another these two episodes rank at the bottom for me, mostly because they both veer too far into slapstick for my taste.

But here are the top ten in my estimation..... 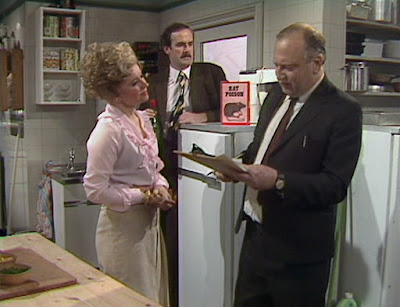 The final episode of the series deals with the hotel being given a health code citation for numerous violations.  While the staff scrambles to rectify these issues and avoid closure, Manuel's pet rat gets loose, triggering a whole new set of problems.  This felt like a good way to end the show, as certain recurring jokes had reached the end of their shelf life.  But it was good for one last hurrah, culminating in the trademark zany Fawlty humor. 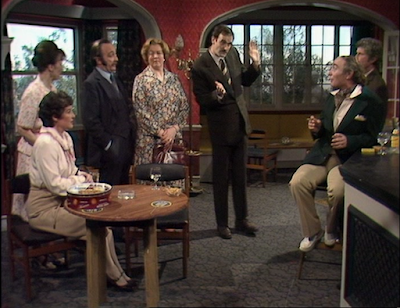 Probably the wackiest episode (Polly even mentions the Marx Brothers in this one), is #11, wherein Basil plans a surprise anniversary party for Sybil but pretends like he's forgotten their anniversary altogether.  This of course backfires as Sybil leaves in a huff just before their friends arrive, and Basil decides to pretend Sybil is upstairs sick in bed.  One of my favorite aspects of this episode one of Basil's friends, Roger, only half-heartedly going along with the ruse despite clearly knowing something's up, and repeatedly toying with Basil.  This episode is probably the most "sitcom-ish" but still has a ton of laughs.

Favorite Moment: Another of Basil's friends mentions she saw Sybil driving around in the town and Basil covers it up by claiming that's another woman who looks like Sybil.  When the real Sybil comes back, Basil pretends she's the fictitious lookalike and locks her in the kitchen while he says goodbye to his friends. 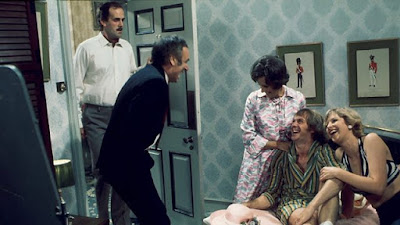 Episode three centers around a bride and groom, and her parents who all stay at the hotel but whom Basil doesn't realize are all one family.  He observes each of them (and Polly, who's a childhood friend of the bride's) going in and out of each other's rooms and assumes there are multiple inappropriate liasons going on.  This leads to him making a fool of himself at every turn, including twice when he and a drunk Manuel end up on the floor as the guests walk in.

Favorite Moment: The groom asks Basil if there's a drug store still open and Basil thinks he wants to buy condoms (in fact he needs batteries for his razor), responding "Let me tell you something - you disGUST me.  I know what people like you get up to, and I think it's disGUSTing."  This bit kills me every time. 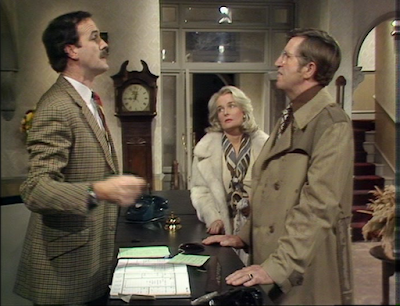 One of the most famous episodes involves a rude American guest who arrives at the hotel after the kitchen has closed but bribes Basil to keep it open longer - Basil takes the money but lets the chef go anyway and tries to cook the meal himself.  It doesn't help that the guest keeps ordering things that aren't on the menu and becomes indignant when Basil pushes back.  This is the episode where the ill-mannered Fawlty meets his match; the American is obnoxious and bullying, and completely intimidates Basil.

Favorite Moment: Hamilton walks in on Basil pretending to yell at the non-existent chef, Basil does a double-take when he realizes he's caught, and then says "Where'd he go? Where's he gone, did you see him?" 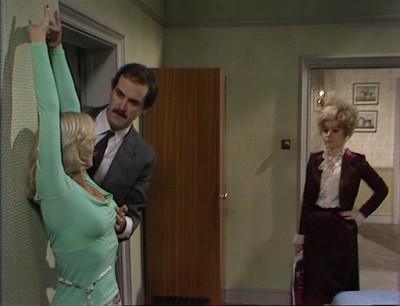 This episode has multiple threads that all come together perfectly at the end - a psychiatrist and his wife stay at the hotel and Basil is uncomfortable with the idea; Sybil flirts with a young, charismatic guest whom Basil is convinced has smuggled a girl into his room overnight; a young female guest arouses Basil's interest and Sybil repeatedly catches him in her room, but not for the reason she thinks.  This episode is full of hilarious misunderstandings and embarrassing situations for Basil.

Favorite Moment: Basil gets pissed at Manuel for inadvertently ratting him out to Sybil, picks Manuel up by the waist and shakes him, before the psychiatrist and his wife walk in and Basil has to pretend he was teaching Manuel how to fight. 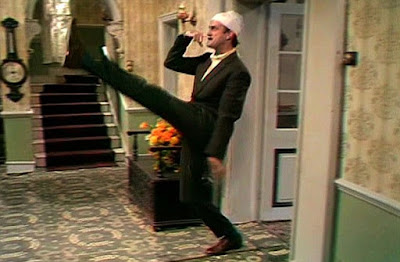 The first season finale centers around Basil being overworked with Sybil in the hospital and too much to do at the hotel.  During a botched fire drill he gets a concussion and ends up in the hospital himself, before escaping back to the hotel and attempting to continue working despite being barely coherent.  This episode has some of Basil's best one-liners, particularly post-concussion when he's uproariously rude to everyone, plus the famous goosestepping Hitler impression.

Favorite Moment: In the hospital Basil gets out of bed and tries to get himself dressed, when the nurse walks in and tells him to lay back down.  Basil just looks at her and says, "My God you're ugly aren't you?"  So hilariously brutal. 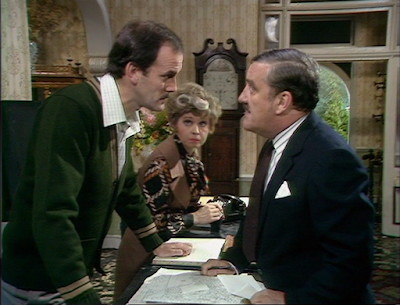 This episode probably shows Basil's worst customer service moments, where he blatantly plays favorites based on who he thinks he's dealing with.  Basil learns that the hotel is to be reviewed for a guide book, and he's under the impression the demanding Mr. Hutchinson is the hotel inspector.  Basil goes from being dismissive and rude to licking the guy's boots at every turn.  All the interactions between Basil and Hutchinson are comedy gold.

Favorite Moment: After Basil learns Hutchinson is in fact a spoon salesman, he passive-agressively confronts him about it.  "Spoons, eh?  SP-THTHTHTH-OONS."  He spits in the guy's face.  Amazing.  And speaking of spoons, there's another great moment where Basil whacks Manuel in the forehead with one, and it absolutely slays me. 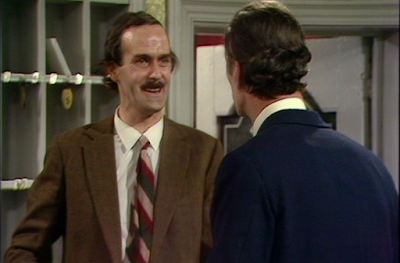 The one that started it all, "A Touch of Class" introduced us to all the characters and began the series-long arc about Basil's desire to improve the hotel's reputation and make it more of an upper-class destination.  He's so obsessed with the idea that when "Lord Melbury" checks in, Basil fawns over him constantly until it's later revealed that Melbury is a con-man.

Favorite Moment: Basil gets so pissed about the Melbury situation (and after an actual well-to-do couple cancels their reservation) he turns around and physically threatens a potted plant, in one of the show's great bits of physical comedy. 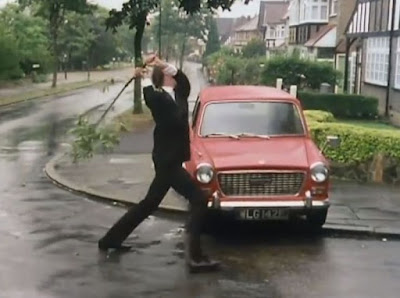 Another of Basil's attempts to attract more reputable clientele was his idea of a weekly gourmet night, an exclusive, invitation-only dinner prepared by a top-notch guest chef.  Everything goes wrong of course, starting with the chef getting passed-out drunk, forcing Basil to bring the food in from outside.  This episode features hysterical sequences where Basil tries to make small talk with the guests, all of which turn morbidly awkward fast.

Favorite Moment: Basil's car breaks down as he's trying to bring back the Gourmet Night feast, and he's so enraged he whips the car with a tree branch.  One of the series' all-time classic moments. 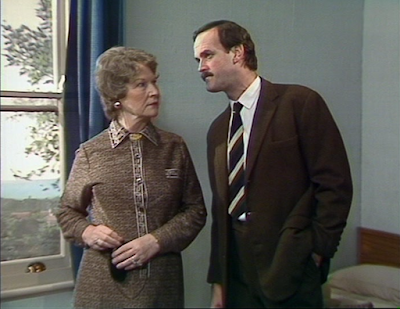 The show's apex for me was the Season 2 opener, featuring a slightly deaf, ever-discontented old woman named Mrs. Richards, whose self-centeredness makes the entire staff miserable.  Add to that another Basil ruse involving a gambling win, multiple layers of misunderstandings, and you have what is for me the perfect Fawlty Towers episode.

Favorite Moment: The banter between Basil and Mrs. Richards is masterful, often revolving around her apparent deafness except where money is concerned.


That's the list - hope you enjoyed it.  Fawlty Towers is currently on Netflix if you're interested in rewatching the series.  And if you've never seen it, stop whatever you're doing and binge-watch the shit outta this show.  Pure genius.