Welcome to another Movies of Disbelief, where I examine one particular issue with an otherwise good film and why it irritates me so.  Today's subject, the 2002 alien invasion film Signs. 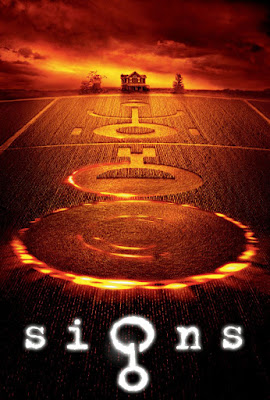 M. Night Shyamalan.  Has there ever been a more divisive film director?  Or more accurately, has there ever been a film director whose output has ranged from "universally lauded" to "fiery garbage on a stick?"  M. Night burst on the scene seemingly out of nowhere with his third film The Sixth Sense (I legit had no idea he'd made two other movies until I looked it up for this article), which proved a smash-hit and popularized the mindfuck ending like no other film had.  He followed it up with the mostly acclaimed but less successful Unbreakable, an intimate twist on the superhero genre (which of course spawned a trilogy nearly twenty years later), and then it was time for Signs.

Starring Mel Gibson and Joaquin Phoenix, Signs was another "up close and personal" take on a genre film, this time The Alien Invasion picture.  Gibson is a widowed ex-minister-turned-farmer who finds a crop circle in his field, seemingly left by an alien presence, and soon other signs of an invasion spring up, including strange noises, animals exhibiting abnormal behavior, and lights in the sky.  Eventually news reports surface of alien sightings, leading to one of the great monster reveals, an amateur video taken at a kids' birthday party (This moment is chillingly effective).  The film expertly builds suspense throughout its entire running time, leading to a final showdown between Gibson's family (brother and two kids) and one of the creatures......and then it falls apart totally and completely in the last fifteen minutes, when it turns out the aliens are allergic to water.  Yeah that's right, simple, old fashioned water.


But that's not even what has my goat about this movie.  Don't get me wrong, it's annoying as all hell that an advanced species capable of interstellar travel - one that would've necessarily taken atmospheric readings before landing on any planet, to ensure the air is breathable - couldn't figure out that not only is our planet 70% covered with liquid that will disintegrate them, but its atmosphere is LOADED with it.  Like, how did they walk around a humid climate such as Brazil without inhaling moisture that would've corroded them from the inside?  How did it not happen to rain in any of the locales they invaded?  But okay, let's say for argument's sake, they couldn't figure out Terra Firma has water coming out its ass.  We'll shelve that gripe, as I have bigger goddamn fish to fry with this movie.


No, what really pisses me off about this film is the other climactic "reveal," where Mel and his family are under siege by one of these lizard men, and only after flashing back to his wife's cryptic dying words "Tell Merrill to swing away" does it occur to Mel, "Say, perhaps I should urge my brother to grab that baseball bat on the wall and Al Capone E.T.'s fucking brains out."  Yeah that's right.  Instead of instinctively going for the first blunt instrument he can get his hands on, he ponders for a moment the last thing Mrs. Gibson said to him after a drunk driver pinned her to a tree, and it just so happened to suggest these Martian motherfuckers could be felled by a Louisville Slugger to their big green faces.  I know when I'm being attacked I try to think of a deceased loved one's final earthly guidance, no matter how irrelevant it might seem.  This one time I got mugged, and my first impulse was to reflect on my grandmother's dying advice, "Boy, you show 'em you're good as gold," and I proceeded to take a golden piss all over that mugger, who ran screaming into the night.  What a fucking stupid ending to this movie.  Someone invades your home, you find a weapon and attack them with it.  It's literally one of the first two impulses you'd have, the other being to run/hide.  Why in the FUCK would this scene need an enigmatic flashback that neatly ties into the domestic crisis our heroes find themselves in?

This movie should be called Signs...That Your Director is a Pretentious Asshole.