A brief note. I put the Meltzer Ratings on my PPV throwbacks for a specific reason. I don't worship Meltzer's word as fact, no one should. His opinions are his own and should be taken merely as that, though very respected and widespread, as an opinion. I post the ratings along with my review to give an insight to what people thought of the product at the time, so that you the reader can understand how the standards of today differ to then. Now usually, I don't post the thumbs up/down parts or the best/worst match segments, but...well...


Legion of Doom 2000 vs Skull and Eight Ball
I honestly didn't pay much attention to this match, but Sunny was hot as always. Hawk no sold a piledriver early, the only man who I'm okay with completely no selling it. But then the bikers got the heat on the LOD, and immediately no one cared. The tag team scene in '98 was historically terrible and it showed here. The Road Warriors should not be having anything other than a Road Warriors Squash. Twin Magic, but Animal says fuck your twin magic with a powerslam for the win.

Meltzer Rating: 1/2*
Did I mention Sunny was hot?

Jarrett had glorious hair and atrocious ring gear. He looks like one of those show ponies as he comes out, embarrassed and ridiculous. I don't know how two 12+ year veterans could have such a bad match. The in-ring work was fine, but no one cared. Bullshit with the escrima sticks (Thank you Nightwing) lead to Jarrett winning a pointless match in a heatless feud.

Sable is wearing the most unflattering outfit any woman has ever worn, and that includes a Yankee's jersey. This melodrama bullshit is stupid, and I don't know why anyone at the time would have cared. How Sable was pushed more over Sunny is ridiculous. I forgot that Mero was an Intercontinental champion,but JR managed to plug that act in between Mero talking.. In the time you read all this the match was over. People cheered when Mero won, and I'm confused

Meltzer Rating: There was no rating, bro.
As a Buffalo Native I apologize on behalf of Marc for all of this.

Kaientai (Dick Togo, Mens Teioh, and Sho Funaki) vs. Taka Michenoku and Bradshaw
This match was made the day of the show, and apparently no one told Kaientai the tradition of 'always bring your gear'. But I guess if you're gonna get buried deep beneath the Earth, they probably did it on purpose. God bless JR for trying to make people care about anyone other than Bradshaw, but Lawler was clearly given the mission of destroying the Japanese forever. Between his commentary and how completely crushed they were by Bradshaw through the entire match, apparently Vince wanted to send a message. Fuck this match 20 ways back to Korakeun, cause every man in the ring deserves better. And then Kaientai got the win by pinning Taka.
Because none of the little men are allowed to get over.

Meltzer Rating: **1/2
This match pissed me off to no end. I'm watching these old PPVs to avoid what pisses me off today, I don't want to see it all here.


There was an awesome video package about not trying this at home, and how the wrestlers are all superb athletes. This got me believing even Marc Mero was a legit badass. I demand you all go watch it.

Rocky Maivia vs Farooq for the Intercontinental Title

I forgot to mention that Farooq jumped The Rock earlier in the show, so Rock came out with a neck brace and limping. Great hope for this match from the bell. Though Rock immediately stopped selling as the match got going, so maybe it was a work? Maybe it was bad selling. The match was doing pretty good for what it was, and I was confused why it was rated as low as it was. Then it all took a nose dive. To explain it would be to explain ducks to Luke Skywalker, or cardio to Katsuya Kitamura. Just know that the ending ruined the match, and Rock won with his feet on the ropes.

Meltzer Rating:: -*
One of the worst Intercontinental title matches of all time.

"The loser must unmask!" they say, even though we've seen Vader unmasked before, in this company no less. On paper I was very excited for this match, but the excitement for it died as it went on. Kane needed to be put over as strong, so Vader didn't get to do a fraction of his offense. Though he did bust out the most beautiful moonsault ever. Missed it, though, for a tombstone and a pin 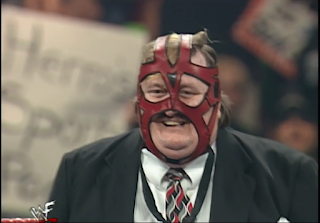 The post match made this all worth. Look how happy Paul Bearer is in this photo. Just fucking look at it.


Mad Dog Vachon and DAAAA CRUSHA came out. Crusher was awesome. He screamed the first few lines of Roll Out The Barrels and punched Jerry Lawler twice. Watch this segment now. I've never felt more proud to be Polish.

Apparently DX were dorks on the Monday Night Raws of this time. But here they came out like the biggest badasses and major stars, all of them looked great. Owen Hart had prominent heat in this match, and works fantastically as a heel. Why he was ever a babyface I have no idea.

Early on this was a pretty fun match. DX pretty much solidified their Babyface status in their feud against the Nation. D'Lo was given a lot of time in this match, and he actually looked pretty good in the ring. You can see much of the DX shtick starting to form in this match. Eventually it broke into a 6-way, and Owen finally pedigree'd HHH onto a title belt (one of the Tag Title belts for profiling purposes) for the pin.

Meltzer Rating:*1/2
It was alright. Nothing to go back and really watch.

This made the past 3 hours worth it. I've seen this match before on Foley's greatest hits DVD, but watching it again I like it more. Carnage all over the place, and Undertaker's presence outside the ring made Vince's lack of fast counts logical. Like last month's match, the two had a great brawl that was allowed to travel past just outside the ring. The Steve Austin character, again, was the avatar of we the viewers, going against the boss and it worked beautifully. And Mick Foley was always one of my all time favorites, and here he really shined in one of his last great brawls. The story was awesome, Dude and Vince taking the mother of all crushing chair shots right to their faces, and Undertaker killing the Stooges dead when they tried to count pinfalls. It's Austin's first great title defense, and it's certainly not going to be his last.

You know, when the main event is good, it really does effect how you see the whole event. I walked away liking Over The Edge, even though a lot of the matches weren't very good. Meanwhile, the nWo stuff ruins the great WCW undercards for me, and leaves me wishing I stopped once the Semi-Main came on. But, I shall carry on watching through all the PPVs, because someone has to. And I guess that someone has to be me.

(All Meltzer Ratings taken from the June 8th, 1998 issue of the Wrestling Observer)