Well that show went from a big bag of suckage to a pretty good PPV by the end.  Money in the Bank 2019 often felt like a WCW show, with not much organization, baffling booking choices and a slew of really short matches.  And then all of a sudden it settled into a really good piece of work (with another baffling choice at the end).  What was made clear here is that a) the WWE roster is too big to fit everyone on a PPV, b) there are way too many championships (and another one on the way apparently), and c) Vince is still grasping at straws to make his product hot again. 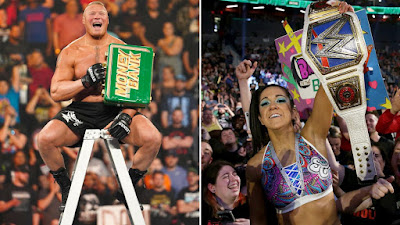 The show kicked off with the women's Money in the Bank match, and while pretty short, this was a good bit of fun with everyone working hard.  There were a few messy spots and everything came off very rehearsed, but the action was entertaining and sometimes innovative.  Naomi got a few fun spots, like when ladders were coming at her from both sides and she ducked into a split, leaving everyone to crash into each other.  Ember Moon got the biggest pop (aside from the finish) with a spectacular Eclipse from an outside ladder into the ring.  Toward the end, with everyone selling injuries, Mandy Rose's pal Sonya Deville actually picked her up in a fireman's carry and climbed the ladder with Mandy on her shoulders (no small feat).  And just when it looked like Mandy was about to steal the win, Bayley came out of nowhere, glared at both of them, and shoved them off before grabbing the briefcase.  This felt like a big moment and it was great to see them finally throw Bayley a frickin' bone.  And she wasn't even done yet.  This was fun.  ***1/4 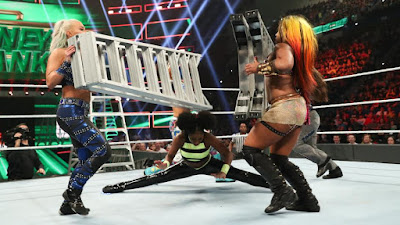 Next up was the match that pissed me off again, Samoa Joe vs. Rey Mysterio.  For the second straight PPV these guys got no time at all, though apparently this wasn't planned that way.  Rey hit Joe with a senton that broke Joe's nose (and it was gushing like a broken water main), so they went right to the finish, with Rey countering a powerbomb into a hurricanrana/cradle combination.  Problem was Joe's shoulder was way up after the one-count but the ref counted anyway, clearly to leave Joe with an out.  It was the first of three terrible officiating calls on this show, and I don't know why they're making all the refs look incompetent.  How is this possibly going to pay off in any satisfying way, Shane fires all the referees?  Joe then beat Rey down in front of his kid.  I assume we'll eventually get Joe vs. Dominic?  Is Dom any good?  This match stunk because it was only 90 seconds.  *

Match #3 stunk too, as The Miz and Shane lumbered through an awkward cage match that saw the referee call for a rope break despite cage matches supposedly not allowing rope breaks (I feel like I've seen cage match pin attempts halted by them before).  Miz hit Shane with a Skull Crushing Finale but Shane got his foot on the rope and the announcers claimed it was because the referee was afraid to count the pin on his boss.  But then, why did he count all the other pin attempts?  Both guys ended up on top of the cage, with Shane trying to slide off but Miz going for a superplex.  Shane ended up slipping out of his shirt and falling to the floor to win.  Seriously?  Shane is 2-0 in this feud now?  And we're gonna have to see this match AGAIN?  Fuck this.  This was overly long and boring.  *1/2

Following this shite, we got the Cruiserweight Title match, and as it turned out this absolutely SHOULD have been on the pre-show.  The audience didn't care about it at all, Ariya Daivari looked sloppy, and the match didn't come together until the closing moments.  Tony Nese hit a 450 splash and finished him with a running knee.  They could've left this off the main card to save time.  I will never understand the mentality behind putting a match on a show just to serve as a buffer.  Shouldn't every match feel like it belongs there?  **

Becky Two Belts had back-to-back title defenses that totaled fifteen minutes.  Pretty underwhelming for the company's hottest star, wouldn't you say?  The first match pitted Becky against Lacey "Green Southern Belle" Evans.  Look, this match was actually decent overall, but Lacey is not in any way ready for the push she's getting.  She obviously has a great look and an imposing physical presense, but she shouldn't have been called up for at least another year.  WWE needs to stop jumping the gun on talent based solely on their look; how many times are they going to make this mistake?  Also the finish was wonky, as we got yet another dumbass referee, who refused to count a Lacey rollup despite Becky's shoulders clearly being down.  Becky countered into a Disarm Her for an instant tapout win.  Sadly this feud isn't over.  ** 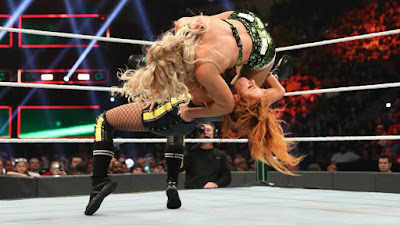 Charlotte then came out to announce that her match would begin immediately.  The announcers handled this all wrong, saying Becky didn't have to accept the match right now and could opt to do it later.  But since when does the champion or challenger get to decide when their match happens?  Shouldn't Charlotte have announced, per Shane's orders, that her match would happen now and that Becky didn't have a choice?  Instead Becky looked stupid for accepting the match right away.  Becky and Charlotte did their usual crisp stuff but it was too short to amount to much, and after six minutes Lacey punched Becky while the ref was distracted.  Becky countered Charlotte's running kick with a small package but Charlotte kicked out and hit the kick anyway (leaving about four feet of light between her boot and Becky's face) to win the Smackdown belt.  After the match Charlotte and Lacey double teamed Becky....  **

....Leading to Bayley making the save and cashing in on Charlotte to win the belt.  The place went apeshit for this and Bayley celebrated in the crowd.  This was handled really well.

Another abbreviated match was next, but I actually agreed with it this time.  I was seriously dreading the Roman Reigns vs. Elias match, but to get around what would've been a total crowd killer, they booked Elias to smash Roman with his guitar backstage and come out for a concert.  Elias played an electric guitar (since his acoustic was broken), did his usual shtick, and closed the performance with "Good night.  I love none of you," which cracked me up.  As he went to leave, Roman's music hit, Roman Superman punched him, threw him into the ring, and speared him for a ten-second win.  This was exactly what it needed to be.  N/R

So yeah, if you just watched the first two hours or so, this was a 1999 WCW PPV, with short matches, booking that was all over the place, and hardly anything worth rewatching.  But then the final three bouts saved the show.

Seth Rollins vs. AJ Styles was the exact type of match I was hoping for.  Crisply worked, full of cool spots (like Seth reversing his superplex/Falcon Arrow combo and AJ countering the Curb Stomp with a Styles Clash), near-falls, and the athleticism we've come to expect from these two.  This was the best match I've seen from either of them in months, maybe in a couple years.  Seth attempted the Curb Stomp twice, with AJ moving out of the way once and then the aforementioned Styles Clash counter.  Seth kicked out and AJ went for the Forearm but Seth caught him, hit the Ripcord Knee and a superkick, and finished him off with the Curb Stomp.  The crowd was with this match all the way through.  An excellent 20-minute bout that left room for a rematch down the line.  I daresay this was the best main roster match of 2019 thus far.  ****1/2 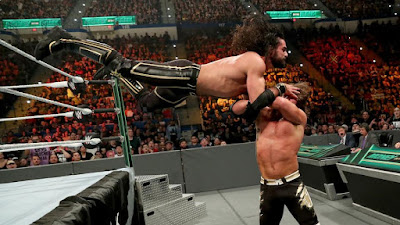 Next up we got a buffer segment with Lars Sullivan killing the Lucha House Party, complete with some accidental blood that added a visceral layer to the segment.  Well done.

The WWE Title match was next, as Kofi Kingston faced Kevin Owens in a well-worked, fast-paced match that unfortunately couldn't quite follow Seth-AJ.  But this was nothing to sneeze at either, and these two packed a lot of action into fourteen minutes.  Owens hit the popup powerbomb late in the match but modified it into a sitout landing for a nearfall.  Kofi hit Trouble in Paradise but Owens rolled out of the ring and soon came back with a Stunner, only for Kofi to reach the bottom rope.  Owens pulled Kofi's shoes off for some reason and tossed them out of the ring, but Kofi hit another TIP for the win.  The crowd wasn't super hot for this but they weren't dead either.  Solid match that just should've gone earlier.  ***3/4 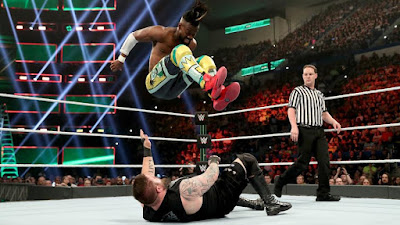 Finally we got the men's Money in the Bank, which turned out to be one of the better incarnations.  Everyone involved worked their asses off, with sick-looking bumps everywhere.  Sami Zayn had been attacked backstage, leaving an open spot in the match; I should've smelled a rat.  Finn Balor in particular took a lot of punishment, including an Andrade sunset flip bomb onto a ladder that bounced so high it launched Balor about three feet into the air.  Ali hit a Spanish Fly on Andrade that got a "What's wrong with these guys??" from Michael Cole.  Late in the match Drew McIntyre launched Ricochet through a bridged ladder at ringside.  This match had some of the more wild high spots in recent memory and should've created at least one new star, but unfortunately just as Ali was reaching for the briefcase, Brock Lesnar's music hit and Ali just had to stand there like an idiot as he ran to the ring.  Imagine how awesome it would've been for Ali to just grab the briefcase and leave Brock holding his dick?  The booking here should've involved three or four guys at the top of the ladder fighting for the briefcase, so Brock could've knocked them all down.  Or, ya know, don't give Brock the briefcase since he doesn't need it at all.  They could've elevated someone new here.  But dumb ending aside, this was a pretty excellent MITB match.  I just don't know where they go with Brock's cash-in.  He's already entitled to a return match with Seth, and he shouldn't win the belt back yet anyway.  Does Seth retain in the scheduled return match but Brock holds the briefcase till SummerSlam or so?  **** 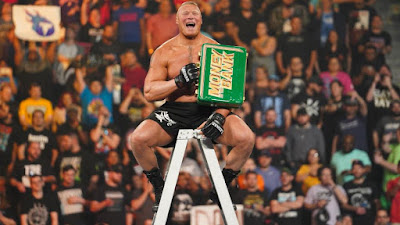 I can't recall the last WWE PPV that was this mixed.  We had matches ranging from one star to ****1/2 and nearly everything in between.  The last three matches were good to awesome, the first seven were mostly mediocre at best.  Really odd show.  But I was happy to see Seth and AJ have the match I knew they were capable of.

Best Match: Seth Rollins vs. AJ Styles
Worst Match: Samoa Joe vs. Rey Mysterio
What I'd Change: Move the CW match to the pre-show, shorten Miz-Shane and have Miz win so this feud can end, leave out the idiotic referee stuff, and give Joe and Rey at least ten minutes.
Most Disappointing Match: Joe vs. Rey, for the second PPV in a row.
Most Pleasant Surprise: Bayley's win/cash-in
Overall Rating: 7/10