AEW Double or Nothing: The War is On!

By any metric, All Elite Wrestling's inaugural show has to be considered a success.  Double or Nothing featured three pretty great main event-caliber bouts, an entertaining, easy-to-watch undercard, a massive surprise debut, and a simple, no-nonsense, sports-like presentation in front of an eager sold-out crowd.  And it scored on PPV as well, potentially garnering as many as 100,000 buys, as well as 200,000 Google searches.  AEW is the real deal, folks, and it's just getting warmed up. 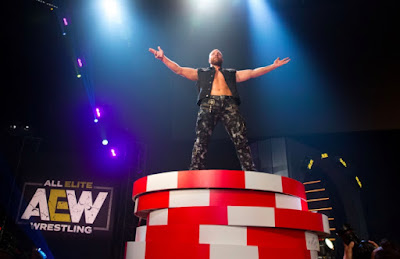 The main card kicked off with a fast-paced six-man tag, pitting SoCal Uncensored against OWE's Strong Hearts stable.  The action was quick and furious, and all six men got time to be showcased.  The match built to lots of high spots including a Frankie Kazarian hurricanrana from the apron to the floor and a Scorpio Sky dive over the ropes.  Kazarian and Daniels finally ended the match with a Best Meltzer Ever on El Lindaman.  A very enjoyable hot opening match to rev up the crowd.  ***1/4

The second match included a surprise addition, as Awesome Kong made her long-awaited return to the ring, turning the Britt Baker-Kylie Rae-Nyla Rose triple threat into a fatal 4-way.  Kong and Rose had several power clashes during the match, while Baker and Rae provided most of the faster action.  They broke out a Tower of Doom spot late in the match, as Baker and Rae went to superplex Rose but all three were powerbombed by Kong.  The match boiled down to Baker and Rae, who traded strikes and suplexes, and finally Baker scored a superkick and running knee to win the match.  Solid stuff.  **3/4

Two up-and-coming tag teams were showcased next as Best Friends faced Jack Evans and Angelico in a wildly athletic encounter.  Both teams broke out loads of innovative combination moves and the pace kept increasing as they went on, culminating in Best Friends hitting their finisher on Evans for the win.  Post-match both teams were attacked by the debuting Super Smash Brothers (who legally have to change their name) and an entourage of masked henchmen.  This match/segment nicely established AEW's midcard teams.  ***
Another six-person showcase followed, this time spotlighting Japanese women wrestlers, as legend Aja Kong led Yuka Sakazaki and Emi Sakura against Hikaru Shida, Riho Abe and Ryo Mizunami.  Like the opener, this was fast and furious, with everyone getting time to shine.  Aja was presented as an all-time great and a killing machine, while Shida in particular came off like a future division standout.  Late in the match the timekeeper jumped the gun during a nearfall, creating some confusion, but the referee waived it off and the match continued, climaxing with Kong accidentally hitting Sakura with a spinning backfist, allowing Shida to land a Shining Wizard for the win.  Another good match, despite the timekeeper's botch.  ***

The show really picked up with the final trilogy of bouts, each totally different than the last.  First up was the long-awaited Cody-Dustin match, and AEW presented this was worthy of main eventing the PPV.  Pre-match Cody took a sledgehammer to a Triple H-esque throne, in an obvious shot across WWE's bow.  The crowd went nuts for this.  The match itself was a gritty, blood-soaked throwback to early 80s NWA, as the two brothers engaged in an intense brawl.  Midway through the match Cody exposed a turnbuckle and tripped Dustin into it, cutting him open.  From there the blood gushed all over the place, a shocking visual in today's wrestling landscape.  Dustin sold this beautifully too, just barely keeping himself in the match and often looking like he was about to pass out.  Dustin hit a twisting superplex for a nearfall, took a CrossRhodes but kicked out, and hit Cody with a CrossRhodes of his own for a close two.  Finally Cody hit another CrossRhodes for the win, capping off a great piece of storytelling.  Cody took the mic and asked Dustin to be his partner in July, against the Young Bucks, and the brothers embraced.  This was a helluva good old-school fight, presented in a way WWE never could have.  ****1/4 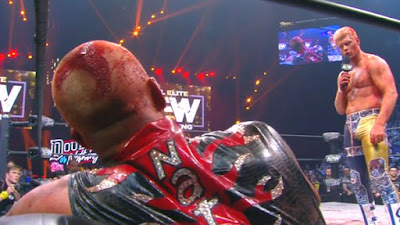 Before the final two matches, Bret Hart appeared for the presentation of the AEW World Title, but was interrupted by MJF, who was then chased off by Jungle Boy, Adam Page and Jimmy Havoc.  The shenanigans took away from the title presentation a bit, but I get why they wanted to include the four young talents on the main show (all of whom appeared in the pre-show battle royal).  The AEW belt is unique-looking, that's for sure.

For me the match that stole the show was the semi-main event, pitting The Young Bucks against Lucha Bros for the AAA Tag Team Titles.  This astounding 25-minute display started with Matt and Nick selling ring rust (in their first match since January), but eventually finding their groove and keeping up move-for-move with Fenix and Pentagon.  Both teams showed off their impossibly innovative offense, building to a spectacular final five minutes full of huge finishers and nearfalls.  Finally Matt caught Fenix in a Tombstone (using his one good arm) long enough for Nick to hit the Meltzer Driver to retain the belts.  Just a fantastic tag match.  ****1/2 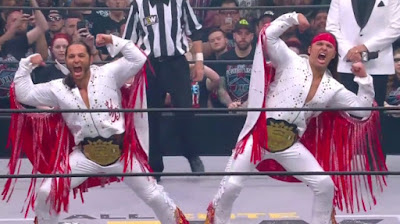 The main event, to determine who faces Adam Page for the AEW Title, was the vaunted Alpha-Omega rematch.  Kenny Omega and Chris Jericho picked right up where they left off in Tokyo, with a huge fight feel and wild high-risk spots along the way.  Omega hit a dive over the ropes onto a table Jericho was holding, flattening them both.  He followed up with a double stomp through the table and would later get backdropped through it.  Jericho accidentally broke Kenny's nose early in the match and Kenny had to wrestle the last 20+ minutes gushing blood.  Late in the match there was a minor botch, as Jericho was supposed to counter the One-Winged Angel with a DDT but both guys sorta slipped.  They repeated the spot successfully, then Jericho hit the Codebreaker followed by his new Judas Effect spinning elbow for the shocking win.  Jericho then took the mic and demanded the fans thank him, but out of nowhere came the debuting Jon Moxley, which got an absolutely nuclear reaction.  Moxley DDT'd Jericho and then brawled with Omega all the way to the giant poker chips by the ramp, hitting another DDT and throwing him through the stage below.  The show closed with Moxley standing tall as this era's equivalent to Lex Luger showing up on Nitro.  Damn good main event followed by a freakin' awesome post-match.  ****1/4 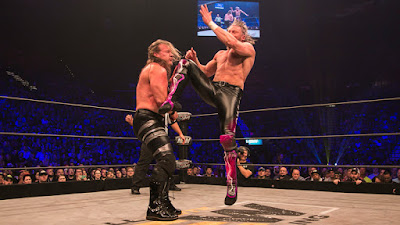 Double or Nothing was more or less exactly what it needed to be - a clear alternative for an audience burned out on the WWE product, with three excellent matches, some good showcase bouts, and big surprises aplenty.  The stage is set for All Out in August, and by the time they debut on TNT in October they'll have created one helluva buzz.  Kudos to all involved in putting together a show that felt important and game changing.  It wasn't a perfect PPV but it hit all the right notes.

Best Match: The Young Bucks vs. Lucha Bros
Worst Match: Probably the women's 4-way, but this was solid
What I'd Change: I'd have liked to see a singles match or two in the undercard.
Most Disappointing Match: Nothing really
Most Pleasant Surprise: Cody vs. Dustin far exceeded my expectations
Overall Rating: 8/10