Our recent trip to Portland, ME yielded numerous brewery visits, and six of them are clustered in the same industrial park!  After hitting up our old favorite Allagash we noticed that across the street were four more breweries, three in one building.  This right here is God's country.

The first stop in this treasure trove of delicious beverages was Battery Steele, a modest operation producing audacious, complex flavors out of a mostly unfinished warehouse space, where you can smell the fresh wort being created (Just like my kitchen when I brew at home). 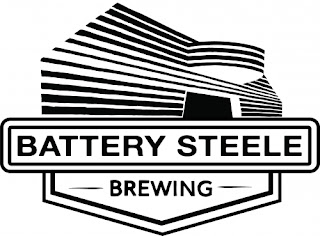 But don't let the barebones appearance fool you, this place has some killer stuff on tap!  We tried all six pours and there was nary a miss to be found.  Check it out, kids... 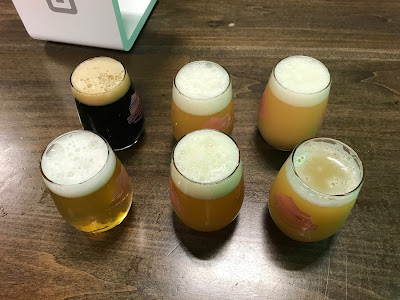 Flume (Double IPA, 8.0%):  A blend of traditional English malts combined with loads of wheat and oats give this double IPA a soft, clean malt profile. We hop this beer intensely, imparting huge notes of tropical fruit, citrus and pine.

JB: My favorite of Battery Steele's IPAs, this was super juicy and boasted a hint of that smooth weed-esque dankness.  Pretty great stuff.


Onsight #7 (Experimental IPA Series, 7.2%):  This beer combines a simple grain bill of 2-row, oats and wheat with some of our favorite hops. The blend of yeasts creates a pillowy soft, saturated mouthfeel that carries notes of melon, stone fruit, berries and gives way to a resinous, deep citrus finish.

JB: Similar to the Flume but slightly more bitter on the finish.  Quite nice. 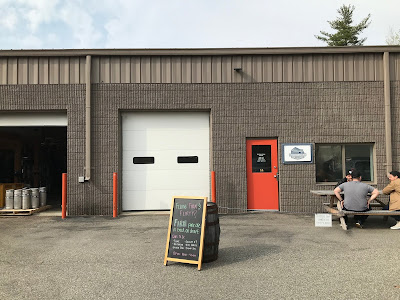 JB: This was an incredibly rich, layered stout with sweet vanilla, milk and cinnamon notes.  Smooth AF, as the kids say.  Second Sun rivals Flume as my current favorite.


Nine Worlds (Nordic Farmhouse Ale with Juniper & Lemon Balm, 4.8%):  Nine Worlds is our rustic farmhouse ale fermented with Nordic Kveik yeast. It pours a slight hazy gold in the glass, releasing aromas of fresh baked bread and hints of herbal, zesty lemon balm. On the palate, it presents flavors of French pilsner malt, spicy European hops and finishes dry with subtle notes of jupiter. It's zippy, clean, and easy drinking; perfect for the transition to spring.

JB: Oddly, despite being a big fan of Farmhouse ales, this was my least favorite Battery Steele offering.  The other beers were so bold in flavor this one got lost in the shuffle for me.  It had some nice spiciness but was also a little sour.  Not bad at all though. 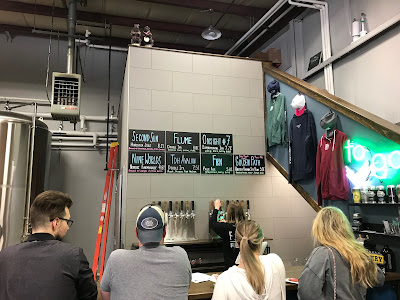 TDH Avalon (Triple Dry-Hopped Double IPA, 7.5%):  This double IPA is soft on the palate with notes of peach, mango and ripe melon.

Kell Sez: The peach, mango, ripe melon description is true to the taste. K luvz it! Fave of this brewery. Stout and Flume are closely following.


Firn (Winter Pale Ale, 5.8%):  Firn is a hearty winter pale ale perfect for the cold and snowy winters of Maine. It is brewed with a base of Pearl malt for a clean finish, the perfect blend of oats and wheat for a soft body, then a touch of rye for a slightly spicy, refreshing character. A combination of Citra and Simcoe both in the kettle and dry hop give this burly pale ale notes of grapefruit, citrus, pine and a light spicy finish.

JB: This one was a bit drier and less juicy than the others.  Probably least favorite of the IPAs but still tasty.


Had we not vowed to visit all the breweries on Industrial Way we'd surely have stuck around Battery Steele for another round of pours; their stuff is that good.  Definitely make it a point to get over there if you're in the Portland area (Also I was absolutely tickled to find cans of Flume at my local Total Wine store)! 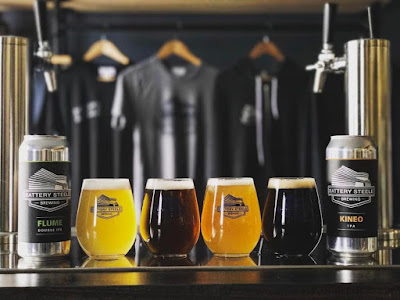 Posted by Justin Enuffa Ballard at 9:45 AM