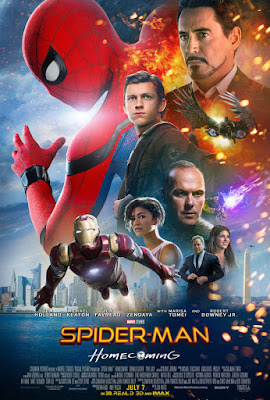 Well folks, we finally have a Spider-Man movie worthy of everyone's favorite web-slinger.  Marvel got Spidey on loan from Sony and added their magic touch to craft the right mix of natural humor, lighthearted adventure, and heavy drama, plus easily the best casting of the role to date.  Spider-Man: Homecoming is exactly what I want of a Spidey film  (It should be noted that I find the universally lauded Spider-Man 2 highly overrated and not much more than a one-time watch).

Tom Holland is note-perfect as Peter Parker, an adolescent, immature, glory-seeking, hormonal dork who hasn't remotely figured out how to handle his newfound super powers.  After a brief assist in Captain America: Civil War, Peter is obsessed with becoming a full-fledged Avenger despite not at all being ready for such a huge responsibility.  He keeps himself busy by foiling small-time neighborhood crimes, frequently stumbling, and at times even making life difficult for the people he's trying to protect.

Meanwhile at school the gifted sophomore Peter is neglecting his studies and his commitment to his Academic Decathlon team, while trying to navigate his way around a romantic crush on a senior student.  He thinks becoming an Avenger will give him purpose and solve all his social issues, but this film conveys better than all five previous Spidey movies that Peter's everyday problems will all still be there when he takes off the mask.  Tom Holland's relatable performance carries this film and for me rings completely authentic, unlike the ineptly nerdy Tobey Maguire or the artificially emo Andrew Garfield.  It's not that I disliked their performances, I just didn't feel that either of them hit the right mark with the character.  Maguire's take was torturous at times, Garfield's was often unpleasant.  Above all, Holland was completely credible as a 15-year-old.  Maguire and Garfield played the role in their late 20s/early 30s, and at no time did I buy either of them as high schoolers.

This film's sense of humor feels effortless, where the Sam Raimi films seemed to belabor the jokes and the Marc Webb films pretty much eschewed humor altogether.  Peter and his best friend Ned have natural rapport, while he and love interest Liz have an uncertain chemistry that worked so much better for me than Maguire and Kirsten Dunst's agonizingly overdone back-and-forth or Garfield and Emma Stone's oddly grown-up interactions.  The romantic story also didn't overtake the entire film and become Peter's raison d'etre.  Primarily he wants to become the hero he envisioned himself to be, but simply lacks the wisdom or experience to make that happen.  He comes to understand that "with great power comes great responsibility" without the script needing to bludgeon us over the head with the idea.

The action sequences have just the right amount of weight to them; they aren't meant to be "epic" set pieces and Spider-Man barely manages to save the day each time.  He's learning as he goes, and the results are quite messy.  My favorite action scene was the one involving the Washington Monument - a sensational and suspensful rescue that puts Raimi and Webb's sequences to shame.

I haven't even mentioned one of the film's greatest strengths, its villain.  Michael Keaton plays Adrian Toomes, better known to comic book fans as The Vulture.  Toomes is introduced as an independent contractor hired to clean up the city after the events of the first Avengers film, only for Stark Industries to pull the rug out from under him by supplying its own cleanup crew.  Toomes has a very legitimate gripe against Tony Stark, and thus on some level we can identify with his character from the first scene.  But Toomes gets a hold of some of the alien technology from The Avengers and becomes a uniquely equipped arms dealer.  Keaton plays the role as an industrious working-class stiff seething with resentment, who will do literally anything to protect his interests.  There's a third-act scene between Toomes and Peter where Keaton's performance becomes positively frightening; from an acting standpoint this is probably the best scene in the film.

Where I found Sam Raimi's trilogy hit-or-miss (part 3 was almost entirely a miss) and Marc Webb's two films just became silly, director Jon Watts has created a well-balanced Spider-Man film that stands mostly on its own but also fits into the larger Avengers scope.  The action sequences are exciting and well-crafted but pretty grounded and not overly long, while the day-to-day of Peter's life feels much more real than anything we've seen in previous Spider-Man films.  And most of all we finally have a cinematic Spider-Man who finds the right mix of wide-eyed naivete and affable cleverness.

I must say I'm looking forward to seeing Spidey and Hulk sharing the screen in Infinity War next year (This is just as big a deal for me as seeing Batman and Superman together).  Somewhere the ten-year-old Justin is very jealous right now.