Wow.  Kind of a strange main event if I'm being honest.  The long-awaited Brock Lesnar vs. Samoa Joe dream match was, I suppose, the match of the night at Great Balls of Fire, but not in the traditional sense.  It wasn't an epic, grandiose battle of the titans but a short, fierce slugfest with both guys swinging for the fences from the start.

Joe worked the match as the heel, attacking Lesnar before the bell and putting him through the German announce table with a uranage slam.  Lesnar took a few minutes to recover and the match was underway, and then Joe dominated the six-minute fight, grounding and pounding before repeatedly trying to put the Beast away with the Coquina Clutch.  Lesnar made some comebacks that of course involved German suplexes (He hit a scant six of them in this match by my count), but unlike most opponents, Samoa Joe was able to withstand them and regain control.  Late in the match Joe nearly choked Brock out, but Lesnar countered with an F5 out of nowhere for the sudden pinfall. 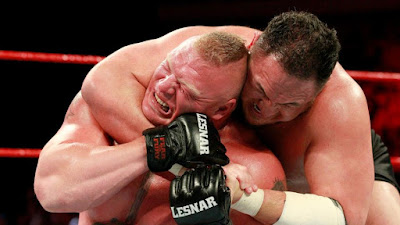 What's significant about this is the F5/pin came across like an escape route for Brock, rather than the coup de grace that put Joe away.  Joe was the monster aggressor throughout the match and Brock looked more vulnerable than he has since his feud with The Undertaker.  When it was over, Brock slid out of the ring with a grin on his face like he got away with something while Joe, fully conscious after the F5, glared angrily.  Samoa Joe was definitively presented as a match for Brock Lesnar, and this speaks volumes of how the company sees him right now.  If it were up to me I'd have had Joe kick out of the first F5 only for Lesnar to hit a match-ending second one.  But aside from that and the brief length of the match I can't really complain about this.  It had a huge big fight atmosphere and Samoa Joe was put over as The Abomination to Brock Lesnar's Incredible Hulk.  This match needs to happen again. 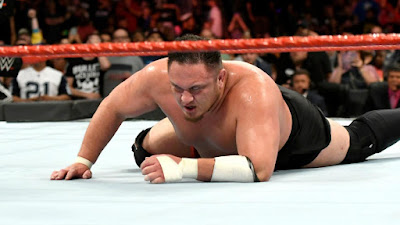 The rest of the show was quite solid, though missing anything in the **** or above range.  Still there was nothing offensive either.  Seth Rollins vs. Bray Wyatt was a perfectly decent if somewhat subdued opener.  At only 12 minutes this felt like the first match in a series, and Wyatt, the heel, appropriately got a cheap win after a thumb to the eye and Sister Abigail.  The booking of the heels on this show was pretty great actually, starting here.  Bad guys getting underhanded wins?  What a novel idea!

Next up was Cass vs. Enzo, and as predicted this was the weakest match of the night (aside from the impromptu Heath Slater-Curt Hawkins bout, half of which we didn't even see).  Enzo cut a heartfelt promo about being an underdog and never giving up, which would've been effective if he didn't get murdered stone cold dead by Cass minutes later.  This was a five-minute squash, with Cass clearly emerging as the star of the former team.  Enzo really needs to be moved into a babyface Paul Heyman role.  He should manage a stable of talented good guys who can't talk that well.  He'd be of much more use that way.


The 30-minute Iron Man (Team) match was next, and while this didn't light my skirt on fire as they say (Someone must say that, come on), it was very smartly booked, which I appreciated.  Sheamus got a quick fall in the first 16 seconds with a cheap Brogue Kick (Somehow I knew there was gonna be a fall right after the bell), and Cesaro & Sheamus never fell behind after that.  Matt and Jeff Hardy fought gallantly to even the score and finally did so in the waning minutes.  But with only thirty seconds left Jeff hit a swanton on Sheamus only for Cesaro to roll him up for the go-ahead fall.  Great cheap heel tactics there.  Jeff chased Cesaro around the ring, rolled him in and hit a Twist of Fate but didn't have enough time on the clock to get a three-count.  Thus Shesaro retained the straps.  As a match it was only ***1/2 or so, but the booking was great here. 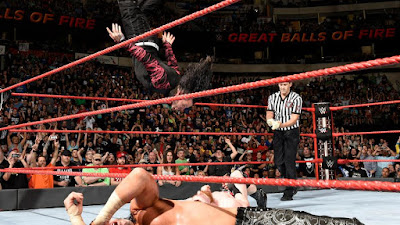 This was followed by an equally satisfying Women's Title match.  Alexa Bliss and Sasha Banks had arguably the best main roster PPV women's match so far this year, meshing well and creating an enjoyable mix of technique and character work, including Alexa faking a dislocated elbow only to sucker punch Sasha and take control of the match.  After a very engaging 12-minutes Alexa took a deliberate countout loss to hold onto the belt.  I've read some complaints about this but I was totally fine with it - Alexa's a douchey heel champion who was overmatched.  Makes perfect sense for her to take the cheap way out, and it sets up a rematch.  Sasha attacked Alexa after the bell, culminating in a pretty spectacular double knee dive off the announce table to the floor. 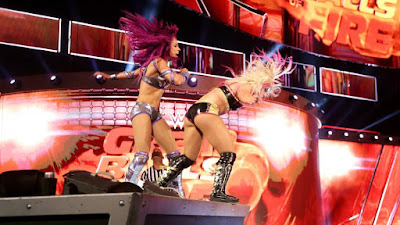 Intercontinental Champion The Miz and Dean Ambrose then had....a match.  This was fine.  That's about it.  The Miz's entourage attempted to interfere repeatedly and Ambrose stayed one step ahead, until he didn't.  Miz nailed the Skull Crushing Finale to retain.  Hard to believe Dean Ambrose was the WWE Champion less than a year ago.  He seems like just a guy now.

The semi-main event slot went to Roman Reigns and Braun Strowman, who had a very entertaining brawl, with the usual Reigns bells & whistles.  There were ring stairs, chairs, fighting near the ambulance, and fighting on the stage, during which Reigns shoved Strowman through the LED screens.  The story of the match was Strowman's invincibility and Reigns' increasing desperation.  Reigns finally went for a spear but Strowman moved and Reigns ended up throwing himself into the ambulance.  Strowman shut the doors to win the match, after which Reigns attacked him, stuffed him into the ambulance, drove to the back, and rammed the ambulance backwards into a semi rig.  The back of the ambulance accordioned, and the show ground to a halt as this angle played out.  Reigns walked away after attempting to murder a man, while a bloodied Strowman finally emerged from the wrecked vehicle, refusing medical attention and walking away.  This has to be a double-turn right?  To recap, Reigns tried to KILL Strowman after losing the match, while Strowman defiantly hobbled away from the wreckage.  If Reigns isn't booked as an official heel after this, they're insane. 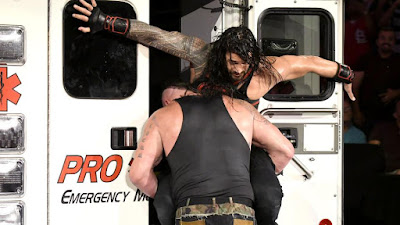 Anyway, Great Balls of Fire was a fine way to spend an evening.  Nothing amazing, but everything on the show had a purpose, Strowman and Samoa Joe emerged as major forces to be reckoned with, and the booking all made sense.  Not much to gripe about here.  Interesting note: All three former Shield members lost, which I think is a first since their losing team effort to The Wyatts at Elimination Chamber 2014.

Best Match: Brock Lesnar vs. Samoa Joe, in terms of being an MMA-type spectacle
Worst Match: Enzo vs. Cass
What I'd Change: I'm not sure why they needed the impromptu match during the ambulance angle.
Most Disappointing Match: I guess in terms of how the match would've played out in my head, Brock vs. Joe, but that dream match for me was always Brock 2003 vs. Joe 2005
Most Pleasant Surprise: I was glad Alexa vs. Sasha got a good amount of time
Overall Rating: 8/10