WWE and The Long, Slow Burial of Sami Zayn 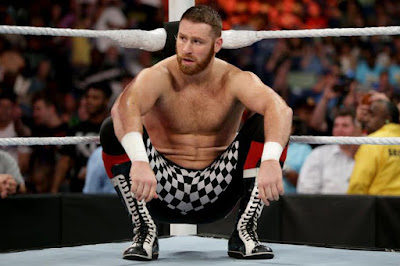 I'm just looking over this Sunday's Battleground lineup and couldn't help noticing that the guy who beat "Mr. Money in the Bank" Baron Corbin at Backlash a couple months ago is missing.  Not only that, the same guy was used last night to put over Mike Kanellis of all people.  Is there some reason Sami Zayn can't get pushed, on SMACKDOWN???  The show where lifelong curtain-jerkers get to be the WWE Champ?  The show where the least qualified participant in BOTH Money in the Bank matches walked away with the briefcase?  I'm gonna need to know which one of Vince's relatives Sami ran over with a golf cart, because it makes not one lick of sense to me that a very over, likable babyface who routinely crushes it in the ring can't get a meaningful feud/push on the increasingly razor-thin Smackdown roster.  I figured he was simply getting lost in the shuffle on the overcrowded Monday Night Raw, but no, if anything he's been booked even worse since moving to the blue brand.
Once again the most relatable guy in the company is being treated like a chump, much like his female counterpart on Raw, Bayley.  Both Zayn and Bayley could be real moneymakers as underdog characters who win despite their inherent limitations.  Instead WWE books them to lose because of them.  "Nice guys finish last" is obviously one of Vince McMahon's mantras, but in the realm of storytelling that line of thinking ultimately does nothing but turn people off.  Generally audiences don't enjoy seeing characters they genuinely like getting the short end of the stick at every turn.  Yes we want to invest in their struggle, but in order for us to invest there has to be the promise of some payoff, of our faith in the character being rewarded.  The popular everyman should eventually get the win in the end, even if it's just a moral victory.

Instead WWE's philosophy with characters like these is to book them like suckers.  Sami's a nice guy, thus he usually can't close the deal, particularly when there's a championship at stake.  Speaking of championships, was the last time Sami had any kind of one-on-one title match?  Survivor Series?  The guy essentially won his feuds against Kevin Owens last year and Baron Corbin this year, with prominent PPV victories over both.  Yet each of his opponents went on to bigger things (Owens partnered with Jericho and won the Universal Title, Corbin won Money in the Bank) while Sami stagnated (a meaningless pre-show SummerSlam match, a one-off PPV loss to Jericho, and a feud where Braun Strowman killed him).  How does the winner of a high-profile feud go on to have less success than the loser?

Once again a guy who got over organically on his own is treated as an afterthought because WWE didn't handpick him to get over.  Thus they just use him as a utility guy to make their latest midcard heel du jour look good.  No offense to the Kanellises, but if they're still even on Vince's radar in six months I'll shit myself.  I mean that literally, I will defecate in my trousers.  Call me crazy but I don't at all see Mike Kanellis getting a standalone match on the WrestleMania 34 card, ever.  So why job Sami Zayn out to him?  This would be like hiring a world-class surgeon to administer cough medicine to your sick child.  Sami is waaaaay overqualified for this position.  Shouldn't Sami's considerable skill be used to help build up someone the company is serious about pushing?  Or, and here's a wacky idea, shouldn't Sami's skill be used to build up Sami??

In an age where the secondary championships (and even the primary ones) are as meaningless as ever, how has Sami Zayn not even been considered for either the US or Intercontinental Title?  Make him a long-running underdog champion who manages to eke out wins despite oftentimes being overmatched?  Or how about a Zayn-Dolph Ziggler feud, since we never got that match at Survivor Series?  Let those two tear the house down with the winner getting a feud against the US Champion.  It would build up the idea that the US Title is a highly sought-after prize if Sami and Dolph tried to murder each other over it.  Or pair Sami up with another under-utilized babyface and give them a run with the Tag belts.  Just give Sami something meaningful to do, for fuck's sake.  It's astounding to me how much talent this company has under its umbrella and yet they can't figure out how to use at least half of them.  Vince's real mantra should be "pearls before swine."


Posted by Justin Enuffa Ballard at 11:02 AM