I'm going back to Westeros, Westeros, Westeros...so here we are. The first of the final 13 episodes (spread over 2 seasons because OF COURSE) of GoT premiered last night. There were a few good scenes, one great scene and a buncha puzzle pieces moving into place. Let's dive in, shall we? 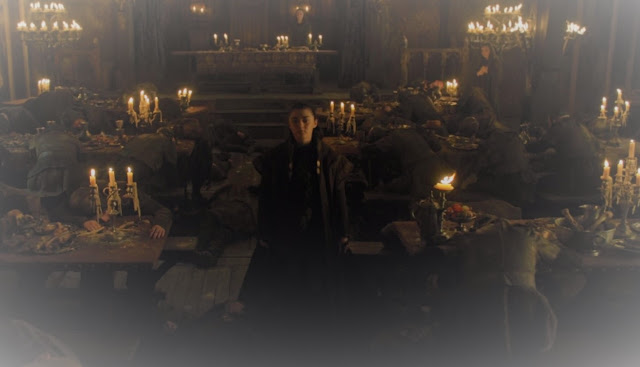 A girl had no name...but she has poison...plenty of poison.

Well, our little Stark girl is all growns up, huh? After slicing the shit out of Walder Frey's neck last season, Arya decides to use her new face swapping powers to decimate the entirety of the Frey clan. And she does this beautifully, getting all those drunks to make a toast with goblets full of poison wine. It's a lovely  scene filled with vengeance and corpses. Arya's revenge tour looks to be her focus this season, and, I for one am delighted. Though I do have a question: so her face swapping also makes her the same size as the person whose face she stole? Cause methinks a teenage girl is a tad shorter than a full grown man...but whatevs...do you, Arya. She also ran into Ed Sheeran and didn't kill him, which shows she still has some restraint.

Finally, after being teased for about 88 years, the White Walkers are acutally, really, truly on the prowl. Teased from the first scene of the first episode, the threat of these ice zombies has really been on the back burner, what with all the warring & incest. But now the real threat in Westeros is here. And they have giants. MOTHER FUCKING ZOMBIE GIANTS. This is awesome. An aside: if this show ends up being a prequel to the Walking Dead, I'm gonna off myself. I already stopped watching a show with zombies walking seemingly to nowhere, I don't need another one. DON'T MAKE ME DO IT, HBO!

Winterfell
There's dissension in the ranks, as Sansa decides to cuck Jon Snow big time in front of everyone that just pledged allegiance to him. She doesn't agree with his strategies Vis-à-vis traders and such, as she sees this as more stupidity a la Ned & Robb Stark. But Jonny boy knows he needs men (& women) to fight off the army of the icicle dead, so he's more lenient. This makes me think that Sansa is gonna make some sort of deal behind Jon's back, further hurting their relationship. Also, Lady Mormont continues to be the baddest mother fucker on TV. 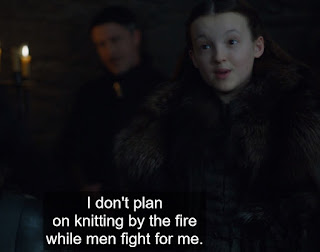 Newly crowned Queen Cersei and her brother lover boyfriend thing Jaime talk a TON of expositon on a literal map of the land. This is legit a scene where the writers musta been like "fuck it, have them tell the crowd the actual plot instead of interesting dialouge". I found it quite lazy and silly. Then Euron Greyjoy shows up. He has his vast armada of ships with him as well.  (dude, you're telling me they built all those ships in two weeks? GET OUTTA HERE). He's there to tell Cersei he would like to enter the game of BONES with her, and she's all like "Nah" so he goes "I'll go get you something nice and we good?" and she's just like "eh". So now he's off on some video game quest to find a treasure to bring back to the pretty girl. The scene was entertaining but pointless.

---So Sam went to the Citadel to learn to become a Maester...and they made him the piss boy. Brilliant. Ol' Sammy Chamberpot is stuck cleaning puke & shit all day instead of learning how to eradicate ice zombies.  A truly lovely montage of poo was our gift this evening, and it was beautiful. Also, somehow, Ser Jorah ends up there with his greyscale in full effect. What a scale skinned loser.

---The Hound is off with is new fire buddies & he's showing glimpses of real humanity. There's also some serious foreshadowing in these scenes that the Wall is coming down. They mentioned in this episode at least two times how it has been up for centuries and nothing can knock it down...we'll see about that.

---And Daenarys gets back to Dragonstone for the first time since she was exiled years ago. There's some real emotions there as she touches sand & sees the throne. But not much else. No one says a word til she speaks "Shall we begin?" No, we shall'nt, because here come the fucking credits. Thanks a lot. 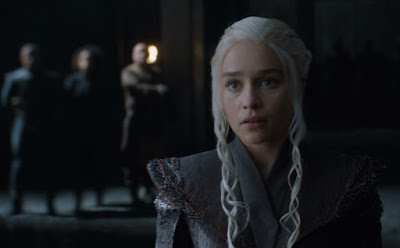 "This is my ancestral home. Generations of my blood have lived here. I'm home." 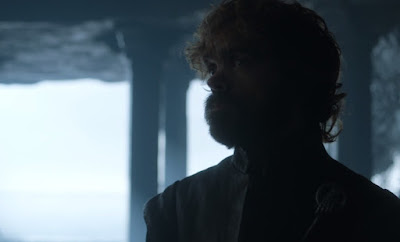 --credit to Jill DaSilva for this joke.