WWE Battleground 2017: An Act of Sabotage? 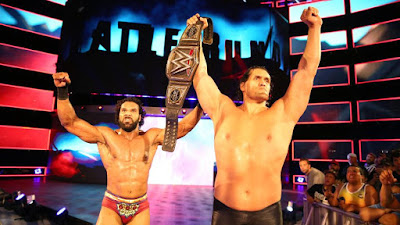 I've said it before and I'll say it again: WWE could fuck up a ham sandwich.

On the raging dumpster fire that was the Battleground lineup, how is AJ Styles vs. Kevin Owens not a runaway Match of the Night?  How do you turn a surefire hit into an instantly forgettable shoulder-shrug of a match?  Here's how: you book a match that never gets out of second gear and ends abruptly with the US Champ getting rolled up for a solid seven seconds while a barely conscious referee slow counts him.

Look, I'm fully aware AJ and Owens aren't blameless for their match falling flat, but I can't imagine they chose to take it easy for the 17 minutes they were given, and they most certainly didn't choose that facepalm of a finish.  The ref got bumped a full minute earlier, and while that spot looked fine it wasn't anything that should've kept him down as long as it did.  While he milked the shit outta the bump, we got a series of traded submissions until AJ locked in a crossface, which Owens countered with a rollup that AJ should've easily been able to escape.  The only thing keeping AJ down really was the fact that he still had the hold locked in.  Just let go, dude.  And the ref was still overselling the bump, so he counted the pin in such agonizingly slow fashion the entire crowd was sure AJ was kicking out.  But he didn't.  And everyone just sorta went "Oh.....ok then...."  A surprise finish doesn't really work if the crowd doesn't react to it.

As of now AJ vs. Owens is the only match I've watched from Battleground, but the general consensus is that the Usos-New Day bout stole the show by far, and the rest was entirely skippable.  I intend to watch said tag match later today but likely won't waste my time with the rest.  Incidentally Battleground is the first WWE PPV since TLC 2013 that I didn't watch at least a majority of (I skipped the filler matches from Fastlane 2015).  This is how disinterested I am in the Smackdown brand right now.

Shinsuke Nakamura was booked like just another guy, only defeating the dreadfully mediocre Baron Corbin due to a nutshot disqualification, after which Corbin beat the crap out of him.  The uniquely gifted Japanese sensation is officially no longer a standout, much like everyone else on the roster not named Brock or John.

The women's elimination match was given a paltry eleven minutes during which three of the four eliminations took place within seconds of each other.  I love how whenever WWE adds elimination rules to a match, suddenly everyone's stamina decreases exponentially.

John Cena returned after a three-month hiatus and had an apparently overlong snoozer of a flag match, hardly a career highlight for one of the best performers in the company.

Sami Zayn and Mike Kanellis got the "death spot," further illustrating how little the company thinks of Sami at this point.  Hey, at least he got the win.

And finally there was the 28-minute Punjabi Prison match, which ended when Jinder's old pal The Great Khali made his much-anticipated-by-no-one return to WWE.  Seriously, did anyone in the entire world miss Khali in his absence?  I did a poll - 85% of WWE fans didn't care that he was gone, and the other 15% had never heard of him.  I guess Vince must've asked himself "How can I make this shitshow of a Jinder push even lamer?"  The Great Khali is of course the correct answer.  They're not actually gonna let this guy wrestle again, are they?  Please tell me he's simply a bodyguard at this point.  The man can barely put one foot in front of the other and his in-ring abilities make those of Nathan Jones seem inoffensive by comparison.

I legitimately believe at this point that the Smackdown brand is being sabotaged.  Between the writing teams being switched and the red-hot Talking Smack being cancelled, this reeks of a deliberate effort to quell the blue brand's former buzz.  The show hasn't been this badly handled since mid-2004 when JBL was pushed out of nowhere as the "wrestling god" while Rob Van Dam, Booker T, Eddie Guerrero and Kurt Angle floundered in the midcard and the company was trying in vain to groom up-and-comers like Heidenreich, Rene Dupree and Mortecai.  I will never understand why Vince McMahon would own two brands but still have a favorite which he actively tries to present as superior to the other.  Wouldn't you want both shows to be as good as possible all the time?

I've said this before too: Thank Christ for New Japan.  If WWE were really the only show in town I probably wouldn't be watching wrestling for a while.  But the G1 Climax tournament has been full of gems thus far and we're only 25% of the way through.  WWE's main roster has produced by my estimation only two bona fide Match of the Year candidates in 2017 - Styles vs. Cena at the Rumble and the Elimination Chamber match.  New Japan has produced probably a solid dozen in the past seven months.  I get that Vince isn't really about great matches all the time, but what exactly is he about at this point?  If you don't have consistently great matches or great promos or great storylines, what else does a wrestling show offer?  Right now the Smackdown brand offers exactly dick.
Posted by Justin Enuffa Ballard at 12:46 PM