And we're back with Ten more Things at the Top.

Since I just posted a list of the all-time best directorial debuts, I thought I'd follow it up with a list of the best "second" films, i.e. sophomore directorial efforts.  Some filmmakers knock it out of the park on their first try.  A few of those repeat that accomplishment on their second attempt, solidifying their reputations as truly gifted filmmakers.  But sometimes a first-time director is limited by budget or time constraints, or lack of proper distribution, and doesn't get to fully realize their vision or garner the appropriate level of appreciation until their second film.  This list is a mix of those two categories.  But first, some honorable mentions..... 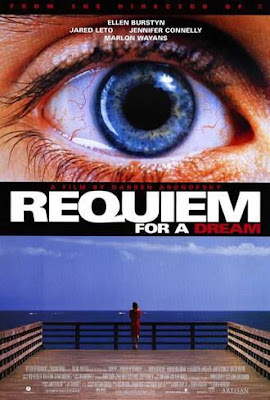 Visually inventive and uncompromisingly weird, Darron Aronofsky announced himself as an exciting new director with 1998's Pi, a psychological thriller about a mathematician with delusions of persecution.  He followed it up two years later with this deeply upsetting ensemble piece about four people with debilitating drug addictions that, despite its severely disturbing nature, really should be required viewing for all teenagers.  Sporting strong performances by Jared Leto, Jennifer Connelly and Marlon Wayans, and an incredible, Oscar-worthy turn from Ellen Burstyn, Requiem for a Dream pulls zero punches in depicting the self-destructive toll the characters' addictions take on their lives.  In adapting Hubert Selby's unflinchingly bleak novel, Aronofsky found a unique visual and editing style to make the movie feel unlike any other.  It's the most unconventional cautionary tale ever put to film. 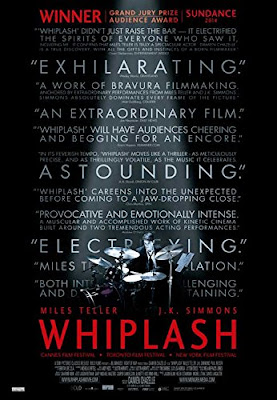 As a music school alum (a jazz-dominated school at that), Whiplash's subject matter immediately caught my attention.  But then it defied my expectations of being a Mr. Holland's Opus-esque movie where the student and the hard-ass teacher grow to respect each other and a father-son bond is forged.  Nope, Whiplash wasn't like that at all.  The teacher Terence Fletcher (JK Simmons) is vulgar, brutally tough on his students, unapologetic, and grandiose.  And the student (Miles Teller) is stubborn, ambitious to a fault, and singlemindedly obsessed with being the world's greatest drummer.  By the end of the film his goal is not to gain Fletcher's respect, but his awe.  This film is centered around this power struggle, and it's absolutely riveting.  Simmons delivers a career performance (not to mention some of the most creative swearing I've heard in years), and Teller announces his arrival as a top-notch young actor.  Whiplash was apparently loosely based on writer/director Damien Chazelle's own music school experiences, and he brings a very personal touch as well as a captivating visual flair.  Whiplash is one of the best music-related movies I've ever seen, and a tour-de-force from a young filmmaker with only one previous feature under his belt. 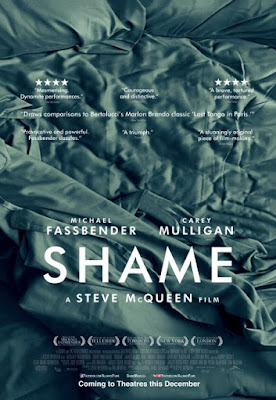 Three years after his brutally frank take on the IRA hunger strikes of the early 80s, Steve McQueen returned with an intimate character study about Brandon (Michael Fassbender), a New York yuppie with a crippling sex addiction, whose life is thrown into disarray when his estranged sister Sissy (played with quiet despondency by Carey Mulligan) comes to live with him.  Brandon's daily routine involves an endless string of joyless sexual encounters and self-gratification, and Sissy's presence forces him to examine his own dysfunctional existence in growing distress.  Fassbender is an Oscar-worthy revelation in this film, creating a potpourri of emotional turmoil and powerfully conveying how imprisoned Brandon is by his compulsions.  This film could just as easily be about a heroin addict or an alcoholic and it would play out almost the same way.  Despite only being Steve McQueen's second feature film, Shame already demonstrated his virtuosic skill as a director.  As with McQueen's other two films, Shame is nearly impossible to put out of your mind. 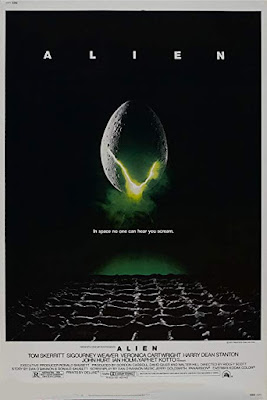 Attempting to capitalize on the success of Star Wars and moviegoers' new interest in sci-fi films, 20th Century Fox quickly rushed this B monster movie script conceived by Dan O'Bannon into production.  But the production company Brandywine envisioned it as a classy, polished sci-fi/horror thriller and tapped unproven director Ridley Scott (fresh off his debut The Duellists) to take the helm.  Scott drew inspiration from films like Jaws and The Texas Chainsaw Massacre to make Alien truly terrifying by showing as little of the monster as possible, while populating the film with relatable everyman characters; "truckers in space" as he called it.  But the greatest coup was the involvement of Swiss conceptual artist H.R. Giger, whose biomechanical creature designs evolved into one of the greatest monsters ever captured on film.  Alien was a milestone of atmospheric horror and art direction, and launched the careers of both Scott and star Sigourney Weaver. 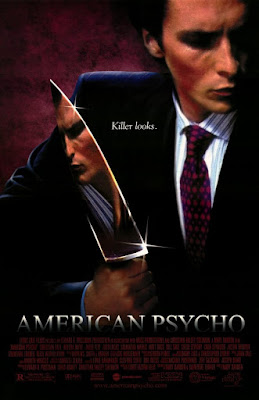 Pushing fifty and with only one previous directing credit, Mary Harron was an unusual choice to helm this grisly adaptation of Bret Easton Ellis's appallingly violent serial killer novel.  But as it turned out a female director was exactly what the film needed to convey its fascinating subtext of unchecked, toxic masculinity.  American Psycho's "protagonist" Patrick Bateman is a wealthy Wall Street executive whose daily life of excess spills over into murderous nocturnal rampages.  Spotlighting a spectacular lead performance by Christian Bale, American Psycho would become an instant cult favorite and a major accomplishment on the resume of this music-critic-turned-filmmaker.  What could've been an unpleasant gorefest was instead reimagined as a scathingly satirical horror-comedy, an indictment of 80s Wall Street culture, thanks to Harron's surprisingly surefooted direction and screenplay (co-written by Guinevere Turner). 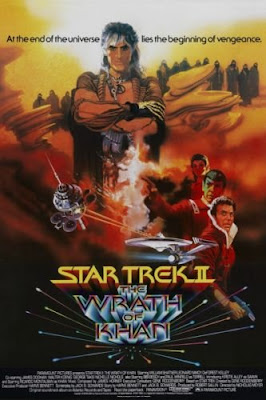 After the financially successful but languid first Star Trek film, Paramount Pictures hoped to make a far more exciting, and cheaper, sequel.  They tapped veteran television producer Harve Bennett, who boiled Star Trek down to its three main characters and their friendship, and young novelist/filmmaker Nicholas Meyer, fresh off his successful debut Time After Time.  Meyer re-envisioned Star Trek as a maritime-esque adventure with themes of aging, friendship, and revenge, while Bennett decided to reintroduce TV series character Khan Noonien Singh (Ricardo Montalban in a delightfully wicked performance), pitting him against Admiral Kirk in a battle of wits and wills that culminates in a sensational emotional climax.  Producer and director found the perfect combination of lofty human concepts and swashbuckling thrills, essentially recreating the template for the quintessential Star Trek movie.  Star Trek II is still by most estimates the best movie of the entire saga, and demonstrates extraordinary vision and ingenuity on the part of its creators.  This film is a sci-fi masterpiece. 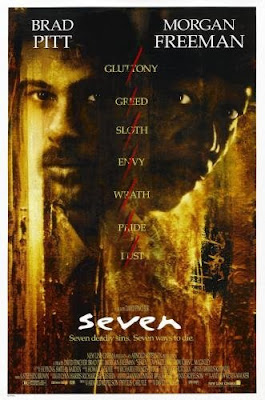 David Fincher's second film is in my estimation one of the greatest suspense thrillers ever made, and it truly put him on the map as one of the great young directors of the time.  This unflinchingly austere shocker concerns a series of murders based on the Seven Deadly Sins, pitting a psychotic genius against the two detectives trying to stop him.  Fincher and screenwriter Andrew Kevin Walker crafted a harrowing detective story, starring Morgan Freeman as the aging, cynical veteran and Brad Pitt as the idealistic rookie.  The two leads have splendidly uneasy chemistry until their investigation brings them together, and of course the surprise late-game introduction of Kevin Spacey as the killer is one of cinema's illustrious character reveals.  Se7en is a magnificent example of its genre, aided by an airtight script and Fincher's desolate noir-influenced direction. 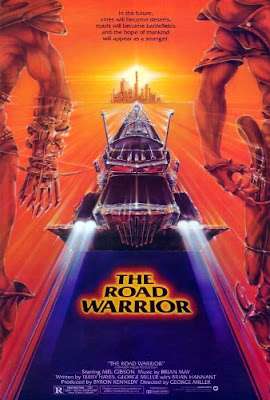 After George Miller's debut feature Mad Max became a huge hit, he went right to work developing a sequel, now with more financial freedom to widen the scope of this dystopian universe.  Mad Max 2 (as it was known in Australia) took on a distinctly Western feel, with Max Rockatansky now a desolate loner wandering a vast desert wasteland.  Where the first film ends on an exceedingly bleak note, The Road Warrior offers the character of Max some redemption, as he helps a colony of survivors fight off a fearsome gang of marauding warriors.  Building on what had been established in the first film, Miller took the story and the car stunts to dazzling new places, staging perhaps the best-ever car chase in the third act, and populating the screen with unforgettably colorful heroes and villains.  The Road Warrior for me stands as one of the two or three greatest action films of all time. 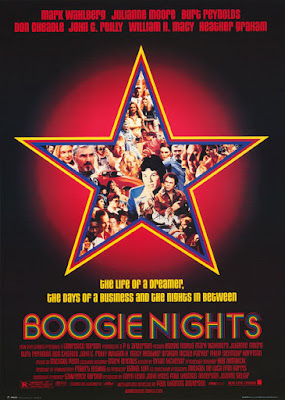 Despite only being his second feature film, Paul Thomas Anderson's audacious dark comedy/drama about the 1970s adult film industry revealed an incredible level of discipline and control on the part of its auteur.  Boasting strongly written (and acted) characters and a strange twist on the "star is born" formula, Boogie Nights tells the story of Eddie Adams (Mark Wahlberg in a career turn), a teenage dishwasher who finds himself an instant adult film star thanks in no small part (pun intended) to his particular genetic endowment (nudge, nudge).  Rechristening himself Dirk Diggler, the young man is catapulted to the top of the industry before an early 80s downward spiral of drugs and violence.  This Scorsese-influenced epic film had some of the same "film geek" tone as Pulp Fiction, plus a stellar ensemble cast and a relentless narrative drive.  Twenty-plus years later Boogie Nights is one of my all-time favorite films. 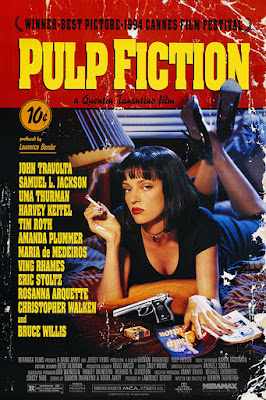 Pulp Fiction was the film that made hot new director Quentin Tarantino a household name and spawned an entire subgenre of crime movies centered around flawed, likeable dirtbags.  Case in point John Travolta's Vincent Vega - a somewhat dimwitted, insecure hitman who nonetheless keeps our sympathy throughout the film.  His partner Jules (Samuel L. Jackson) speaks with swear-laden eloquence and on some level knows he's above the life of organized crime, ultimately redeeming himself in the end by walking away.  The pair are the main characters in this hilarious, fascinating, non-linear collection of stories, while the other main plot involves a down-and-out boxer (Bruce Willis) who's been paid by the mob to take a dive but screws them over and goes on the lam.  These interlocking stories are brilliantly crafted by Tarantino and co-writer Roger Avary, and driven by quirky, believable dialogue that organically reveals character details; these characters talk like real people, not plot devices.  Also of note, instead of a traditional musical score QT carefully selected rock songs and surf music to punctuate the action, making Dick Dale's "Miserlou" an essential part of 90s pop culture in the process.  Pulp Fiction still holds up as a masterpiece of "film geek" cinema that reinvigorated Travolta's career and made a star of Jackson.  That it was only Tarantino's second film is astounding.