AEW All Out 2020 is in the books.  It was a solid show with several good matches but I have to say I thought this was their weakest PPV effort thus far.  Whether it was the unbearable heat (95 degrees and humid - such is Florida in early September), or the fact that the only actual fans in the venue were far from the ring and thus mostly inaudible (I'm not sure why the wrestlers at ringside have toned down their "fan" reactions; they were working so well), overall this show didn't capture the AEW magic like the others have.  It was by no means a bad show but also not the great one it had the potential to be. 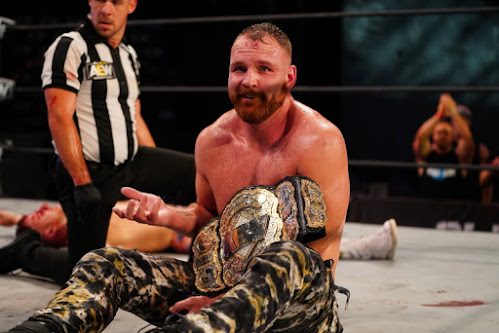 Things kicked off in less-than-stellar fashion with the goofy Tooth and Nail match; this was supposed to have been on the pre-show and probably should've stayed there.  Britt Baker and Big Swole brawled mostly throughout a dentist's office that was pretty obviously a set inside Daily's Place.  The action was pretty generic Attitude Era hardcore match-type stuff.  Baker at one point tied Swole in her dentist's chair and tried to use a power screwdriver on her (I'm not sure why they didn't make available an actual dentist's drill), followed by a syringe full of novocaine.  But this backfired and Swole injected the novocaine into Baker's leg, punched Reba through a framed diploma, and put a gas mask on Baker causing her to pass out.  Swole was declared the winner.  This was dumb and not at all a good choice for an opener.  *
The true opening bout was The Young Bucks vs. Jurassic Express.  This was wildly energetic, athletic showcase that was tailor-made for an opening slot.  The story here was the Bucks becoming more and more aggressive, playing the heels to Jungle Boy's underdog character.  Luchasaurus hit a couple of big dives, including one over the barricade onto several bystanders.  Unfortunately this kept him indisposed as Matt and Nick hit a pair of superkicks on Jungle Boy (one echoing the famous Shawn Michaels-Shelton Benjamin spot).  But Jungle Boy kicked out of both pin attempts before the Bucks hit the BTE Trigger on him for the win.  This was a fine contest and the best thing on the show for most of the show.  ***3/4 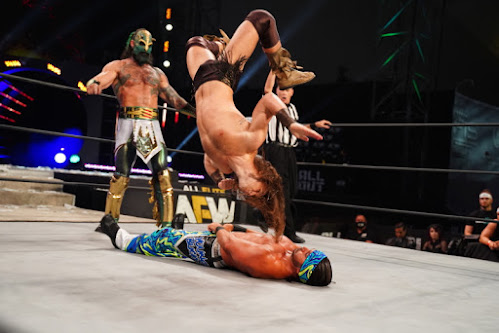 The Casino Battle Royale was next - an amusing schmozz but a tad longer than is really warranted for a battle royal.  The standout performances were Brian Cage, who scored three eliminations and was presented as a potential winner, Will Hobbs, who I'd never seen before but looked like a monster, and of course Lance Archer, who was easily the logical winner.  Matt Sydal made his AEW debut and sadly slipped off the top rope when going for his shooting star press.  Miraculously he managed to catch himself and avoided injury by simply landing on his back, but Jeezus that was terrifying.  Here's hoping he can make us all quickly forget this moment; what a way to debut...  Anyway, this was fine, the right guy won, it just went a little longer than it probably needed to.  **3/4
The Broken Rules match suffered from what appeared to be a serious injury but somehow was not.  Matt Hardy and Sammy Guevara began the match in the adjacent Jaguars stadium and within a few minutes ended up fighting on a forklift, from which Sammy speared Matt through a table below.  Now this looked like Matt smashed his skull on the concrete floor and I have no earthly idea how that wasn't the case.  Matt was stumbling around after this and referee Aubrey Edwards threw up the dreaded X and stopped the match.  Matt was escorted to the back by Dr. Sampson and reemerged moments later having apparently been cleared to continue.  Both guys climbed a truss, Matt punched Sammy, and Sammy fell through the staging below, where Matt scored the pin.  I'm assuming the concern over Matt's injury was real and he either got knocked loopy for a minute or he sold it so well it fooled Aubrey into thinking he was concussed.  Either way, this was a really scary spot that stopped the match dead in its tracks and they clearly went straight to the finish once it was determined that Matt was ok.  This wasn't good, or particularly responsible.  *1/2
Things picked up again with the Women's Title match, as Hikaru Shida was met with a strong challenge in Thunder Rosa.  The work here was crisp and frequently spilled outside.  The match was a good mix of big moves and stiff striking.  Late in the match Rosa hit a death valley driver on the apron, but Shida recovered and hit a meteora from the middle rope to the stage.  Shida finished Rosa off with a running knee strike at the 17-minute mark to retain the title.  Not sure who will be next for Shida, but AEW should sign Rosa, as she's a damn fine worker with natural charisma.  Solid stuff.  ***1/2 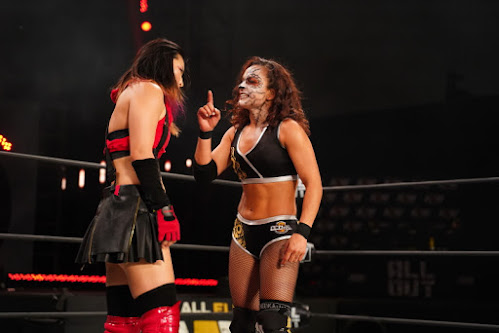 The Dark Order 8-man tag match was placed in a weird spot and went way longer than it needed to.  This felt like a NJPW opening 8-man match, except that it went 15 minutes.  Everyone got a little time to shine, but the action wasn't terribly memorable.  I was expecting The Dark Order to win here but Dustin Rhodes pinned Colt Cabana with a rollup.  I'm guessing this leads to some sort of disciplinary action on Colt this week?  This was alright but not terribly PPV-worthy.  **1/2
The final three bouts all delivered in one way or another, starting with the Tag Title match.  While not at all the all-time classic Omega and Page had with the Bucks, their match with FTR was very strong and had a fairly epic feel to it.  FTR did a lot of old-school working over of body parts, while Omega and Page wrestled their usual high-impact style.  The storytelling aspect could've been stronger overall, but the contrast of styles worked for me.  Late in the match Omega went for a V-Trigger but accidentally hit Page.  From there it was all downhill for the champs.  FTR took Omega out of the match with a chop block and hit a pair of spike piledrivers on Page to win the titles.  Omega sold disgust with Page for losing and teased hitting him with a folding table before walking out.  The Bucks tried to stop Omega from leaving but he refused to talk to them, getting in his car and driving off.  This match was very good but fell short of the greatness I expected.  FTR will make fine tag champs.  ***3/4 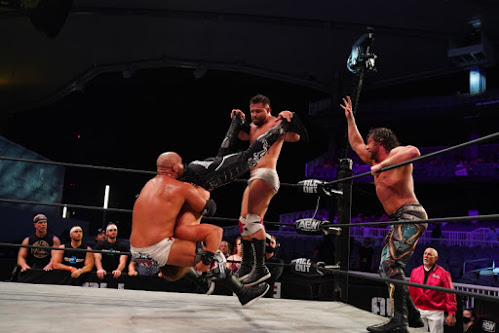 The Chris Jericho-Orange Cassidy match was next, with two big tanks full of mimosa at ringside.  The match was both amusing thanks to the stipulation, and heated thanks to the excellent work both guys have done in getting this feud over.  Cassidy charged at the outset but ran straight into a Codebreaker for a near-fall.  From there the match alternated between big wrestling moves (Michinoku Driver, second Codebreaker, etc.), hardcore match tropes (Jericho smashing a plastic platter over Cassidy's head, Cassidy hitting Jericho with an ice bucket), and teases of someone falling into the mimosa.  Cassidy ended up winning the match with a pair of Orange Punches while Jericho was on the turnbuckles, knocking Jericho into the tank.  As I predicted, Cassidy went over by dunkage, which elevates him but doesn't hurt Jericho as an established star.  I'm fine with that, as long as Cassidy's follow-up feud is a strong one that further builds him up.  ***1/2 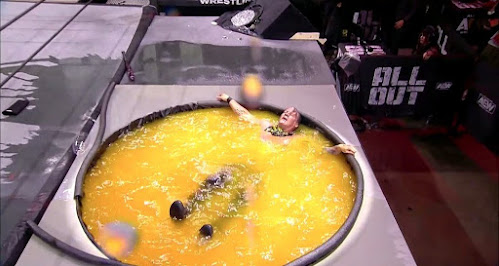 For my money the match of the night was the main event, as Jon Moxley and MJF had a gritty, old-school title match.  The stipulation was that Moxley couldn't use the Paradigm Shift or he'd lose the match and the title.  They teased this a few times during the bout, first because Mox wanted to use the move out of habit, and later when MJF spit in his face to try and draw the match-ending finisher.  Moxley dominated the early parts of the match but MJF took over after pulling Moxley off the apron, smashing his arm into it.  MJF worked over Moxley's arm like crazy after that, and Mox sold it well.  Moxley came back with a slingshot into the ring post, which left MJF gushing blood.  Still, MJF worked the arm, at one point hitting a double stomp from the top rope that looked and sounded brutal.  There was another great NJPW-esque spot where both men got to their knees and traded strikes.  MJF hit a low blow and rolled Moxley up for a near fall, followed by a CrossRhodes.  Moxley again kicked out, and Wardlow tried a distraction in order to toss MJF's ring to him, but the throw was bad.  MJF had to turn around to pick it up, and with the referee distracted, Moxley hit the Paradigm Shift for the win.  This will of course leave MJF with an out; he lost due to a banned finish.  He'll also probably split with Wardlow as a result of this, which will keep him busy until his next title match.  I liked this main event a lot.  **** 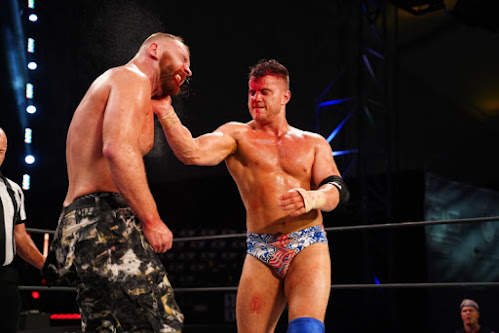 So All Out was a solid effort but definitely below the PPV standards this company has set in the past.  Unlike every other edition this show was missing that five-star match that got everyone talking.  Double or Nothing 2019 had Dustin vs. Cody, All Out 2019 had the Lucha Bros-Young Bucks ladder match, Full Gear had Jericho vs. Cody, Revolution (for my money their best show to date) had Omega/Page vs. The Bucks, and Double or Nothing 2020 had the Stadium Stampede.  This show needed at least one bout people would refer to as THE MATCH.  Still, not a bad way to spend an evening.
Best Match: Jon Moxley vs. MJF
Worst Match: Britt Baker vs. Big Swole
What I'd Change: Leave the dentist match on the pre-show, take some kind of precaution with that forklift-through-table spot so there's no chance of Matt getting concussed, trim the battle royal and the 8-man, and beef up the storytelling in the Tag Title match.  And let's get these ringside wrestlers whooping and hollering again to fill the sound void.
Most Disappointing Match: Probably Omega/Page vs. FTR, given how high my expectations were.
Most Pleasant Surprise: Nothing really.  I liked the matches I expected to like.
Overall Rating: 7.5/10
Thanks for reading - subscribe to our mailing list, and follow us on Twitter, MeWe, Mix, Facebook and YouTube!
Posted by Justin Enuffa Ballard at 11:20 AM