Well, 2020 has punched us in the gut yet again.  Joe Laurinitis, better known as Road Warrior Animal, has passed away at age 60, joining his long-departed comrade Mike Hegstrand (Hawk).  No word yet on the cause of death, but it's unfathomably cruel, this wrestling business that has taken so many so young. 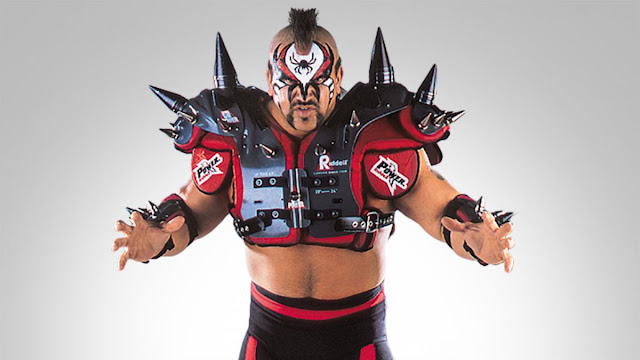 I first became aware of The Road Warriors in 1985, when one of my friends procured a Best of the AWA tape which spotlighted AWA Championship matches (the centerpiece was Rick Martel winning the title from Jumbo Tsuruta).  After the main content was over, the tape featured trailers for other tapes in the collection, one of which spotlighted The Road Warriors.  Already a huge fan of the 1981 film The Road Warrior, I immediately took notice, marveling at these two larger than life, facepainted monsters obliterating everything in their path.  Animal in particular stuck out to me thanks to his mohawk, which recalled the charismatic villain Wez from the film (shoutout to Vernon Wells).  Every time I visited my friend's house I'd insist on rewatching that tape, and the clips of Animal and Hawk were the highlight for me.

That VHS cassette and the Saturday morning cartoon Hulk Hogan's Rock n' Wrestling were my dual gateways to becoming a fan of this bizarre form of entertainment where musclebound guys (and gals) pretend to beat the shit out of each other.  A year later I began watching the WWF religiously, but not long after that I discovered the NWA, whose roster to my surprise and delight now included Hawk and Animal.  It didn't take long for the duo to become my favorite tag team, their presence and mystique so compelling as to defy the concept of "workrate."

Not that Animal and Hawk couldn't work a match; quite the contrary, their athleticism between the ropes stood in stark contrast to their enormous stature.  Here were two of the most powerful men in the sport, each able to military press an opponent over their heads, while also capable of dropkicks and flying clotheslines and shoulderblocks.  On top of that, The Road Warriors (along with rivals like The Midnight Express) took tandem wrestling moves to a new level, inventing several devastating-looking combinations, the most famous of which of course is the Doomsday Device, for me the greatest tandem move in wrestling history.  Animal would lift an opponent onto his massive shoulders and Hawk would level him with a flying clothesline off the top rope.  The first time I saw this move I just about soiled my trousers.  It became the yardstick for tag team finishers and it's been copied and tweaked numerous times by others.
Animal and Hawk not only delivered brutal, high impact wrestling matches but they became a credible threat to tag team champions and singles champions alike.  In the NWA they were perennial top contenders for the World Tag belts (I always felt they never got the Tag Team Title run they deserved, only holding the belts for a scant five months), but both men also repeatedly got World Title shots against Ric Flair, something pretty unthinkable in today's wrestling landscape.  Imagine for example one of the Street Profits being presented as a legitimate threat to Drew McIntyre's WWE Championship.  But both Hawk and Animal were so fearsome and dominant we the fans could easily see either of them dethroning the great "Nature Boy;" that is the sign of a truly over tag team act.

And they really were a package deal.  Over the years Mike and Joe drifted apart at times, and every time either of them attempted a comeback without the other it wasn't the same; the magic was in their chemistry together.  It was, and continues to be, so rare for two wrestlers to be totally committed to being presented as a unit.  All too often a tag team just serves as a launching pad for one or both partners to become singles stars.  But Animal and Hawk were all-in on being a team, and along with their manager Paul Ellering (one of the great talkers of the era), The Legion of Doom provided must-see segments on every show on which they were featured.

In kayfabe terms The Road Warriors were the great equalizer; anytime a babyface in peril faced a battle against greater numbers, they called Animal and Hawk for backup.  Dusty Rhodes and Nikita Koloff need help facing The Four Horsemen?  Call in the Warriors to even the odds.  Jimmy and Ronnie Garvin are in trouble with The Varisty Club and Ivan Koloff?  Animal and Hawk will set things right.  Sid Vicious and Danny Spivey are laying siege to the tag team division?  Let 'em face The Road Warriors and see who the real monsters are.

The Road Warriors were a once-in-a-lifetime act, one that's been imitated ad nauseum over the decades (Demolition, Powers of Pain, Headbangers, Authors of Pain, War Machine, etc.), but there will never be another tandem possessing the perfect storm of brute strength, commanding physical presence, palpable credibility, and size-defying athleticism that Hawk and Animal brought to the table.  They left an indelible mark on their profession, and both men left us too soon. 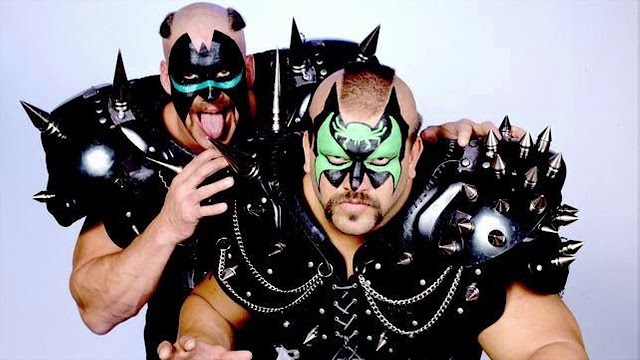