2020 has been an all-out shit show, but at least there's one constant still intact, and that's NJPW's G1 Climax tournament.  Pushed back to September due to the Olympic Games being booked in Japan, this year's G1 probably couldn't have happened properly if slated for its usual July-August timeframe.  So serendipity prevailed in the end.  This lineup is appropriately stacked as all G1 tournaments should be.  Let's take a look at the block lineups, shall we?

I was worried that due to COVID travel restrictions we'd get a watered-down G1, but fortunately we have a full roster again this year (minus Jon Moxley), and thus loads of potential for four weeks of great wrestling.  This year the G1 cards will only consist of the five tournament matches each night, which will make things a little easier to keep up with.  As always this tournament will have Tokyo Dome ramifications; no word on whether WrestleKingdom 15 will be a two-night event like 14 was.  But enough setup, let's dive in.... 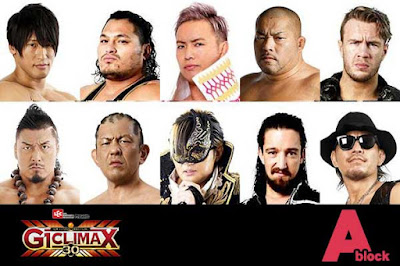 The company Ace has been without the IWGP Championship since January and always has to be a block favorite, especially when he isn't the champ going into the tournament.  Betting on Okada to win the whole thing is never a bad move.

That said, Ibushi has so much to prove this year, having won last year's G1 but come up short both nights of WrestleKingdom 14.  He and Okada had the 2020 Match of the Year (I don't see anyone topping that bout in 2020), but he failed to unseat the champion, and then on Night 2 he took a screwjob loss at the hands of Jay White.  So Ibushi also has to be a favorite to win and redeem himself at the Dome.

One of my favorites in the company these days is the bruiser Shingo, who has delivered in spades in big match situations.  Shingo will hopefully go deep into this tournament and steal a few shows on the way.

The unsung hero of G1 is almost always Ishii, who delivers many of the best matches on the tour but sadly never finishes at the top of his block.  But his matches will be a joy to watch regardless.

Jay will be interesting to watch this year since in his COVID-era absence Evil kinda took his spot as the Bullet Club leader, winning the IWGP and Intercontinental Titles for a couple months.  White and Evil could be on an eventual collision course for ultimate Bullet Club supremacy.

Perhaps the most missed competitor in NJPW these last six months has been the mega-talented Will Ospreay, who stole the tourney last year in his ***** match with Okada.  Ospreay should be one of the top finishers in his block if I'm booking this thing.

The NEVER Openweight Champion will be looking to hurt some people as always, but I think he'll take a couple of key losses to set up title bouts in the fall; Shingo will likely be the one to spoil his tournament aspirations.

Cobb's performance in last year's G1 was perhaps a bit underwhelming, but hopefully he'll rectify that this year with a string of good-to-excellent matches.

I'm still not sold on Taichi.  He's had a handful of very good matches the past couple years but I don't see him as a guy to watch yet.  Maybe this tournament will change my mind, but I expect more Suzuki-Gun shenanigans in his matches.

Takahashi is this block's throwaway guy, who will most likely only win one or two bouts tops.  Yujiro is a lower-echelon Bullet Club member and generally doesn't deliver bouts of memorable quality. 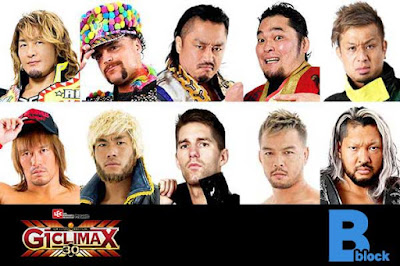 The current double champion, Naito just regained the belts from his former LIJ pal Evil, and has a chance in the tournament to prove his dominance.  Being that he's the champion he'll likely lose one or two key matches to set up a challenger in November, and will be a block leader but ultimately fail to crack the finals.

The former champ is looking to climb back to the top and I could see him defeating Naito to set up a rematch in this fall.  I'm still not totally sold on him being a main eventer but this block will be a good test.  He has generally delivered in the G1.

The former Ace has another chance to go for that one last title run like he did two years ago.  I don't think he'll take it down this time, but Tanahashi's G1 showings are always a pleasure.  I see him being a spoiler for someone.

Poor Goto is always a bridesmaid in these tournaments, and this won't be any different.  He'll have a few great matches but I don't see him as a block leader.

Sanada hopes to reach the next level like his former best friend Evil, and on the final night of B Block he'll get a chance at some payback when the two of them lock horns.  Sanada could be a dark horse to win B Block.  I don't see him winning the whole tournament though.

ZSJ's matches are always something different, as his unorthodox technical style continues to confound opponents.  Like Goto I think Zack is good for some top-notch action but won't finish at the top of the block.

Juice is still waiting for another crack at Jon Moxley's US Title, and a strong showing here would solidify that.  Who knows when Mox will be allowed to return to Japan (Our COVID situation in the US doesn't allow it currently, plus he's been busy), but Kenta is due a shot, and I could see Juice getting one too.

Kenta just earned a title match with Jon Moxley and will probably have a strong showing in the G1.  He won't win the block but I think he'll finish in the top 3 or 4.

Yoshi is basically where Taichi is.  He can put on good matches occasionally but he'll be more of a punching bag here.

Yano's matches are more or less always the same.  Comedy hijinks, the odd stolen win, repeat.  He's the inaugural King of Pro Wrestling Champion, so he'll put someone over to set up a later match for the trophy.

Kazuchika Okada vs. Kota Ibushi - Their WK14 match was unreal awesome and this one should be too.  I said I don't think any match this year will top that one, but I suppose this match could conceivably do so.  It will be hampered by a 30-minute time limit, but stranger things have happened.

Kazuchika Okada vs. Will Ospreay - These two stole the whole tour last year and might just do it again.  I can't wait to see them try.

Kota Ibushi vs. Will Ospreay - Will ya look at that, my top three A Block matches are the same as last year.  Well it's hard to beat these three guys all taking turns fighting each other.  Okada, Ospreay and Ibushi are among the greatest wrestlers in the world in 2020, so give me all their matches, all the time.

Tetsuya Naito vs. Evil - Naito and Evil haven't had a match they're capable of yet, as their two title matches this year were rife with Bullet Club run-ins.  Hopefully with the 30-minute time limit we'll get something faster paced and with no bullshit.  Evil could win here to set up a title rematch.

Evil vs. Sanada - These two faced each other in the semifinals of the New Japan Cup, where Evil effectively turned on his best friend, winning in underhanded fashion, and later joined BC.  Sanada will look to avenge both the betrayal and the loss.  Evil's matches have been full of interference ever since, but hopefully the drama here will make up for whatever run-ins we get.

Tetsuya Naito vs. Kenta - These two had an underwhelming match earlier in the year but they have a chance to redeem themselves.  Kenta is another Bullet Club member whose matches are all too often full of heel interference, but hopefully that will be kept to a minimum in this match.

As usual, A Block is much stronger on paper than B Block, with more star power and better workers.  Between Evil, Kenta, ZSJ and Yano, B Block could be way too heavy on "sports entertainment" and outside interference.  I hope it isn't.  Anywho, that's neither here nor there.  Let's talk finals predictions.

A Block will almost certainly come down to either Okada or Ibushi.  Both guys should get title matches at The Dome, and if WK15 is indeed two nights I think they probably will.  Ibushi won the G1 last year but didn't win the title.  I could see the opposite happening this year, with Okada winning the G1 but losing to Naito on Night 1 of the Dome, while Ibushi earns a Night 2 title shot some other way.

B Block will come down to either Evil, Sanada or Naito.  I think Naito's out of the finals because he's the champion.  So does Evil continue his ascent and have another tournament final against Okada?  Or does Sanada avenge his New Japan Cup loss and get a crack at the finals?  I think the latter is more likely.  Sanada has been on the cusp of greatness for a good couple years now, and an appearance in the G1 Final will improve his stock.

I think it's Okada vs. Sanada in the Final, with Okada winning his first G1 since 2014 and taking yet another trip to The Dome.


That's what I got, tell me what you guys think in the Comments section, and enjoy the G1 Climax!