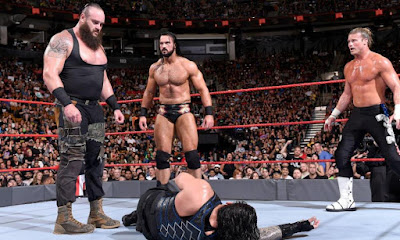 Man, it takes some serious pigheadedness to look at the top two babyfaces on your flagship show and then turn heel the one who ISN'T getting booed.  But that's what Vince has done.  For nearly the past year Braun Strowman has been getting better babyface reactions than anyone on RAW not named Seth Rollins (How Seth still isn't Vince's pick for the top star is beyond me), and now that he's been positioned to feud with Roman Reigns for the Universal Title, they decided he, and not Roman, should be the heel.  And to protect Roman from getting skewered by the fans they've reunited The Shield, the only proven formula to guarantee he gets the reaction they want.  Man, if you have to trick your audience into not booing your top babyface, what the hell does that tell you?  Like, how manipulative was that SummerSlam main event?  They put Strowman out there at the beginning to prevent the crowd from showering the match with "We want Strowman" chants, they had him announce that he would cash in after the match to keep the fans glued until the finish, and then when the cash-in didn't happen they quickly went off the air so the home audience wouldn't see the crowd turn on the result.  Has any other wrestling company needed this kind of Machiavellian maneuvering to make it look like their guy is the fans' favorite?

I do not understand Vince's over-the-top spitefulness with this Roman experiment.  This shit's been going on for four years and the fans by and large have shown little indication they'll ever accept Reigns as their top guy.  No matter how many alternatives the fans have provided to Vince - Daniel Bryan, Dean Ambrose, Seth Rollins, Braun Strowman - he refuses to simply admit he was wrong and go with the flow.

And yet turning Roman heel and making him a murdering asshole would get exactly the kind of crowd reaction Vince wants for Roman.  Turning The Rock heel worked in this way, turning Tetsuya Naito heel worked for New Japan, turning Hogan heel worked in WCW when his Hulkamania shtick got old, it's basic wrestling logic.  When the babyface is getting booed, you turn him heel.  If the crowd continues to hate him, good, that's his job.  If the crowd starts to love him, perfect, you have yourself a hot new top star.  But no, let's turn Braun.  Because if anything'll change people's minds about Roman it's encouraging them to boo the guy they actually like.  When did Vince McMahon's brain and logic become so separated?

Sadly there's basically zero chance any of this will change until Vince is gone.  Fox is paying WWE obscene amounts of money starting next year, and as long as WWE delivers acceptable ratings they have no incentive to ever listen to their audience again.  It is so baffling to me that any entertainment company would have such a flagrant disregard for what its fans want.  No other company would be able to exhibit this kind of behavior and still expect to be profitable.  In ten years when they make documentaries about this era in WWE they should dub it the Fuck the Fans Era.

Posted by Justin Enuffa Ballard at 9:48 AM