All Elite Wrestling: This Is Gettin' Pretty Exciting.... 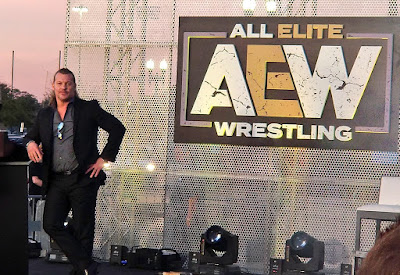 With last night's rally in Jacksonville, we're getting a much clearer picture of this All Elite Wrestling thing everyone's buzzing about.  It's an exciting time to be a wrestling fan, as we're on the cusp of being offered a whole new option from which to get our fake fighting fix.  More importantly, the talent is about to potentially get a whole new avenue in which to make a good living as a wrestler, away from the creatively homogenized WWE atmosphere.  The fact that AEW was able to snag a name as big as Chris Jericho is pretty huge.  Jericho lends them instant legitimacy and somewhat mainstream recognition.  All signs seem to be pointing to Kenny Omega following suit, which would provide AEW their cornerstone guy.

Even aside from the roster announcements (So-Cal Uncensored and PAC are among the biggest supporting characters thus far), the Khan family is worth literally billions of dollars, far more than Vince McMahon, which means AEW will theoretically be able to offer real money deals to top stars.  This could be enormous when contracts come up.  WWE may have to start working much harder to keep their talent happy.

Provided they can land a good TV deal and some sort of streaming arrangement for PPV events (I can't see many people wanting to go back to shelling out $50 a pop for PPVs), this company could very well change the North American wrestling landscape.  How poetic would it be by the way, for TBS or TNT to scoop up this programming?  Set the flagship show on Tuesday nights where Smackdown's about to not be anymore.

While all this is very exciting, I'd really like to see them partner with NJPW (and ROH for that matter).

As of now NJPW will be continuing their relationship/talent exchange with Ring of Honor.  Understandable, as both companies have been good for each other.  But it seems to me that New Japan and All Elite kinda need each other as well.  NJPW can't afford to lose a star like Kenny Omega at this point (not to mention the cast of supporting characters like Cody and the Jacksons), while AEW's roster (for now anyway) could use the supplemental talent NJPW would provide.  The All In 2 show wouldn't be nearly as stacked as its predecessor without the New Japan talent that was involved with the first show.  From New Japan's perspective I can't see a reason not to work with both AEW and ROH.  From AEW's perspective I can't see a reason not to work with NJPW.  Ring of Honor is the only company of the three that might stand to lose anything, but it would behoove AEW and ROH to work out something so both can remain in collaboration with New Japan.  The three companies will be so much stronger together than in competition.

That leads me to my next point - I've been saying for a while that New Japan would benefit greatly from a women's division.  A partnership with AEW (and ROH) would allow them to borrow women's talent from those two promotions while building their own roster.  A women's division in New Japan would lessen the need to rely so heavily on repititious six- and eight-man tag matches on the less important shows.  This is the one area in which NJPW is way behind the curve.  I was very pleased to hear that AEW's women wrestlers will be paid equally to their male counterparts (I assume based on their standing in the company; Penelope Ford is obviously not making the same as Chris Jericho), as it sounds like they're serious about building female stars to rival the men, as WWE is currently doing.  A relationship between the three companies would even allow for a string of women-only supercards that could conceivably be a much bigger deal than WWE's first one.

It's going to be an angst-ridden few months as we wait for more details to trickle in about AEW's future, but there are some seriously promising elements in place that could lead to the first true wrestling boom since 2001.  A company with the finances to lure away WWE talent and offer a much more creatively free environment would force Vince & co. to actively step up their game.  A partnership with New Japan would strengthen both promotions and give their shared venture a global footprint.

Now, can we give CM Punk a ring and see if he's interested?