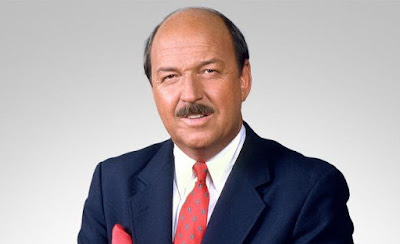 Today the wrestling world lost one of its most beloved figures in "Mean" Gene Okerlund.  For me growing up, Gene was the affable "host" of WWF television, conducting most of the backstage interviews, hosting the WWF Magazine news segments, and generally serving as the de facto voice of the company.  He always found fantastic chemistry with the talent, keeping them engaged, feeding them lines to garner the best possible promo, and also managed to ride the line between being a dignified company representative and a light comedy figure.  His rich bass timbre carried weight and gravitas, lending the WWF product immediate legitimacy, and Gene also wasn't afraid to try his hand at a little singing (the 1980s Wrestling Albums included his highly entertaining cover versions of "Tootie Fruity" and "Rock n' Roll Hoochie Koo").  Okerlund could help convey the intensity of a blood feud like Savage vs. Steamboat, or provide a laugh, like in his training montages with Hulk Hogan.

Gene's background was, fittingly, in radio broadcasting (Has there ever been a more perfectly suited disc jockey voice?), until he was offered an announcing position in the AWA.  From 1970-1984 Gene was one of the promotion's top broadcasters, until Vince McMahon raided the company's talent pool and brought him to New York.  For a full decade, Gene was one of the WWF's great personalities, later departing for WCW, where he remained until its closing.  He was inducted into the WWE Hall of Fame in 2006.

For my money there will never be another wrestling interviewer like "Mean" Gene Okerlund.