Well it wasn't the blow-away event it looked to be on paper, but the 2019 Royal Rumble was a fine show with a slew of very good matches and nothing bad.  Hard to complain about that.  Even the pre-show stuff was solid (Check out the blistering Cruiserweight 4-Way especially). 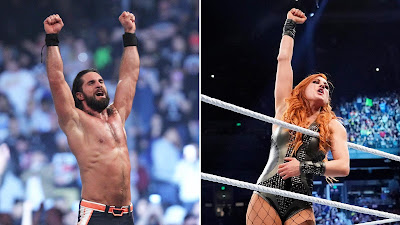 But let's get into the proper PPV, as five hours is plenty to talk about.  The show kicked off with a pretty great Asuka-Becky Lynch bout that was rock solid technically and built to a series of traded submission attempts.  After a brutal-looking Asuka cradle neckbreaker off the apron to the floor, Asuka and Becky made their way back into the ring for a climactic stretch where both women attempted to tap the other with her own finisher.  Finally Asuka scored an Asuka lock, and turned it into a Cattle Mutilation-esque variation by bridging on top of Becky for the tapout win.  This match was probably my favorite on the show.  Excellent stuff that made Asuka look really strong but showed Becky could keep up.  I was quite sure we hadn't seen the last of Becky....  **** 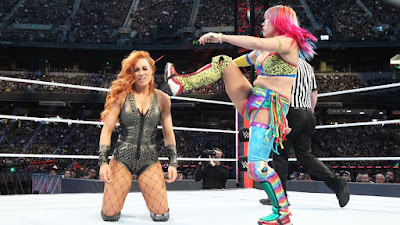 Next up was the one match I didn't care about, The Bar vs. Shane & Miz.  But this was fun.  Cesaro and Sheamus worked a stiff match as usual, Miz stayed away from most of it, and Shane took some good spots while dishing out a few of his own.  I still have a problem with the near 50-year-old non-wrestler Shane going toe-to-toe with actual wrestlers, but he makes it entertaining at least.  The spot of the match was Shane going for a coast-to-coast on both Bar members only for Cesaro to stand up and catch him for a Giant Swing - very cool counter.  Finally Miz hit Cesaro with the Skull Crushing Finale and Shane landed a shooting star press to win the belts.  This is obviously building to a Shane-Miz match at 'Mania, which I also don't care about.  But whatever.  **1/2


The other women's title match was Ronda Rousey vs. Sasha Banks, which I found nearly as good as the opener, albeit with a few miscues.  This was non-stop action and as always Ronda made it feel like a big fight, while Sasha demonstrated she could go move for move with her.  The story was Ronda's right arm, which got hurt when Sasha sent her into the ring post, thus Ronda struggled with her submission moves the rest of the match.  The climax saw Sasha struggling to lock in the Bank Statement, using her loose arm attire to gag Ronda.  Ronda reached for the rope but Sasha rolled her back to the center of the ring and got an armbar.  Ronda then countered it by spinning into her Piper's Pit finisher, which she landed for the win.  Damn good match that established Sasha as a very tough challenger who took Ronda to the limit.  Ronda had to settle for a pinfall rather than a submission, for the first time in a PPV match.  ***3/4 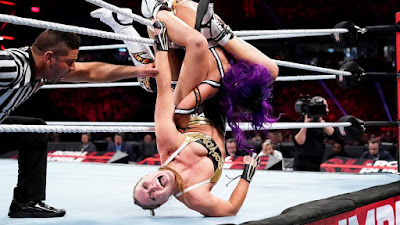 The Women's Rumble match was probably mechanically a better match than last year's but wasn't quite as much fun I would say; the mix of current and past stars last year was a blast.  But I liked that WWE introduced so many future main roster stars in this match (and the men's).  There is a deep pool of upcoming talent in NXT and they all got some time to shine here.  Some of the spots were sloppy but that happens in pretty much every Rumble; my big complaint about this match was that it simply went too long.  There was no need for this to go 72 minutes, particularly on a show this long already.  It also seemed like they saved most of the star power for the final ten entrants, which felt like an imbalance, but did make for a climactic final third.  I was certain Becky would end up in the match, and that's what happened after an injured Lana was deemed unable to enter the match.  Becky lobbied to take her #28 spot and was allowed to do so.  This bit was drawn out a bit long though, as Becky didn't enter until after Carmella had come in at #30.  Once Becky was in it was obvious she'd win the whole thing, which is fine; I've always maintained that predictability in wrestling is fine as long as it's satisfying.  The match came down to Becky vs. Charlotte, and I imagine Charlotte will challenge Becky for the 'Mania spot, since Becky wasn't even supposed to be in the Rumble.  Maybe it will end in a draw or something to justify a triple threat with Ronda.  Anyway this Rumble was messy and overlong but kept me entertained.  *** 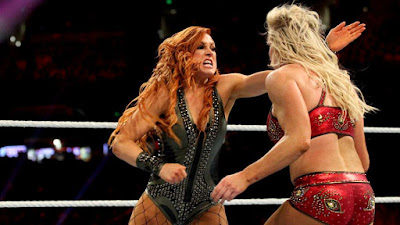 The most disappointing match of the night, shockingly, was Daniel Bryan vs. AJ Styles.  This was a well-worked match with some great spots but never clicked with a crowd that had just been red hot for Becky's win and was saving energy for the last two matches.  AJ and Bryan got put in the wrong spot on the wrong card.  It didn't help that the match was missing a sense of urgency.  I think if they had kinda torn into each other the crowd would've gone along with them.  But they started methodically and didn't quite build to a peak.  The finish also did them no favors as Erick Rowan sauntered to ringside just in time for a ref bump that allowed him to interfere and cost AJ the match.  That ending sucked.  AJ and Bryan are still looking for their definitive WWE match.  This certainly wasn't bad, but given the talent involved it should've been much better.  ***1/2 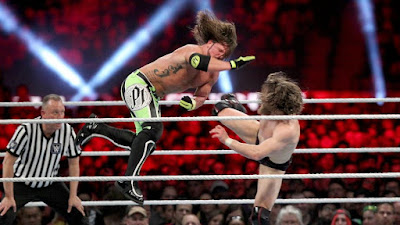 I loved the next match though, despite its truncated length.  So did the crowd.  Finn Balor and Brock Lesnar cut a furious pace, with Balor going right after Brock at the bell, hitting him with dropkicks galore.  Brock took a couple minutes to gain control and threw multiple suplexes, but when the action spilled out to ringside, Finn sent him gut-first into the corner of the announce table.  Twice.  This was the turning point, as it took away much of Brock's power and evened the playing field.  Brock couldn't muster the strength to hit the F5 and Finn's stomp-centric offense kept aggravating the stomach injury.  Finn hit three over-the-rope dives and the Coup de Grace, but as he went for the cover Brock locked in a Kimura, forcing Finn to tap out.  Finn looked great in this match, and maybe more than any recent opponent, put Brock in a desperate situation, where the Kimura was a last-ditch effort.  After the match Brock hit multiple suplexes and F5s, leaving Finn for dead.  Under normal circumstances I'd say that was kind of a burial, but the announcers sold it as being born of Brock's insecurity at having almost lost.  Finn had him so off-balance he was compelled to reassert his dominance after the match.  The follow-up is key here; Finn needs a big program heading toward WrestleMania, or else he'll be just another guy Brock beat.  Anyway, excellent title match, and about as good an eight-minute match as you're likely to see.  ***3/4 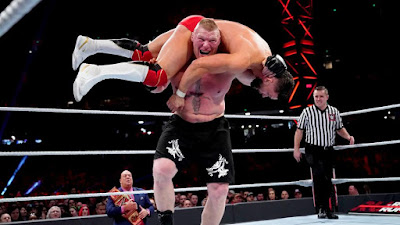 The Men's Rumble flew by for me, obviously because the entrant intervals were shorter.  Things started off dumb, with Elias vs. Jeff Jarrett, but picked up with Nakamura, Samoa Joe and Seth Rollins all coming in early.  There weren't a ton of memorable spots in this match but it was a very solid Rumble and some new stars got big moments.  Mustafa Ali got to eliminate Nakamura and Joe, Aleister Black eliminated Dean Ambrose (Black came off like a big future star here), Andrade, Johnny Gargano and Pete Dunne got a lot of offense, etc.  One moment people have complained about was Nia Jax attacking R-Truth to take his spot.  While from a logical standpoint it made no sense, a) it's nothing we haven't seen before, b) Nia mixing it up with the menfolk was way more interesting than anything Truth would've done, and c) the crowd ate it up.  For those three reasons I liked that segment.  The obvious winner Seth Rollins was put through a table by Bobby Lashley late in the match to build suspense, but it came down to Seth vs. Braun.  They both ended up on the apron, Seth rammed Braun into the post and hit a Curb Stomp on the apron to knock Braun out and win the match.  This Rumble probably ranks somewhere in the middle, but like the women's match it kept me entertained.  Not much to complain about.   ***1/4 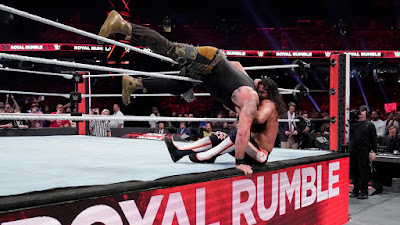 So what we have with this show is more or less the opposite of last year, where the two Rumbles stood out but the other matches were just okay.  This year it was the undercard bouts that carried the show, while the Rumbles were passable.  Still this was a stacked card with nary a bad match, it was just missing a great one.  AJ vs. Bryan should've provided that, but sadly it fell short.  The Women's Title matches and Brock-Finn were the big standouts.  WrestleMania season has some promising threads to explore, so let's hope the company follows this up well.

Best Match: Asuka vs. Becky Lynch
Worst Match: The Bar vs. Shane & Miz
What I'd Change: Bryan vs. AJ should've been much faster paced given its slot, the women's Rumble should be cut by ten minutes
Most Disappointing Match: Bryan vs. AJ.  Dammit guys, you're way better than ***1/2!
Most Pleasant Surprise: How close Finn came to winning
Overall Rating: 8.5/10