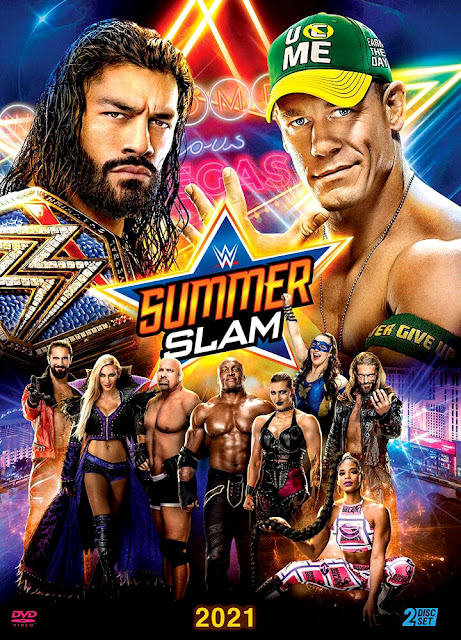 The PPV kicked off with the RAW Tag Championship, as AJ Styles and Omos defended against RKBro in a short but energetic bout that brought to mind old school PPVs where the opening match was just an easily digestible warmup.  AJ did almost all the work for his team and meshed well with both opponents, there were some fun spots later in the match as Matt Riddle took an Omos apron slam and an AJ moonsault DDT on the floor, perfectly executed.  It boiled down to AJ and Orton, who missed his first RKO attempt but scored on the second, pinning AJ to win the straps.  The crowd loved this title change and Riddle was ecstatic, and even Orton looked happy.  Decent little opener. 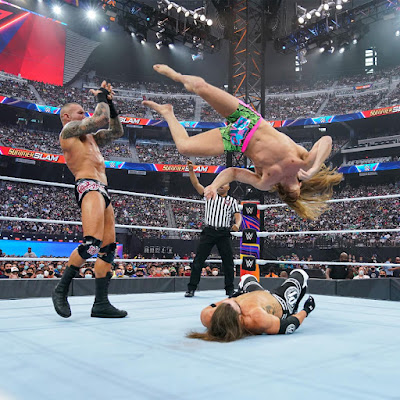 Immediately the streak of good matches ended as Alexa Bliss faced Eva Marie in a useless regular match that didn't belong anywhere near a PPV.  There was no supernatural bullshit, which was good, but we were subjected to an Eva Marie match, which was bad.  Bliss hit Twisted Bliss off the top, followed by a DDT for the win.  I can guarantee this match did not garner a single ticket purchase or Peacock subscription.  Why was this on this show?
The next two bouts were very solid, particularly the US Title match as Sheamus and Damien Priest had a rugged, stiff contest that went 14 minutes.  They hit lots of big moves, Sheamus used his protective mask for a headbutt but later Priest ripped off the mask while locked in a heel hook, and then pounded away at Sheamus's injured nose.  Priest hit his Reckoning finisher (same as Cody's CrossRhodes) for the win and the US Title.  Nice to see them actually give Priest a decisive win here, and this was the best thing on the show until Edge and Seth. The Smackdown Tag Titles were next as The Usos defended against the Mysterios once again.  I had no interest in this match but they worked hard and pulled out a strong bout.  Lots of high flying offense as expected, Dominik played the babyface in peril, and Rey got the hot tag to run wild.  Rey hit the 619 on Jimmy, but Jimmy got his knees up on the subsequent top rope splash attempt.  The Usos hit Rey with twin superkicks and Jey did a top rope splash to pin Rey.  Good stuff.
Up to this point I had pretty good feelings about this show.  Three out of four matches were good, and up next was the match I was most excited about, Bianca Belair vs. Sasha Banks.  The video package aired, Bianca came out, and it was time for Sasha's entrance.  Aaaaand then they announced that Sasha wasn't cleared.  Yup, the company knew a week earlier that Sasha wasn't cleared to wrestle here, but continued to advertise her, UP TO THE RING ENTRANCES.  Fucking inexcusable.  Shit like this is why Vince will never be seen as a legit entertainment mogul.  I believe Christian Cage coined the phrase "Carny piece of shit," and I hope he meant it as a way to describe his former boss.  Imagine having such a disdain for your audience that you advertise for a week a match you have no intention of delivering.  So then Carmella comes out as the challenger and the crowd gets pissed.  Then suddenly Becky Lynch's music hits and the crowd goes bananas.  Why was Carmella even included here, might I ask?  Becky beats up Carmella and challenges Bianca to a match on the spot, proposing that they, and I quote, "tear the house down."  Yes, she used the phrase "tear the house down," meaning have a match that steals the show.  There I am, sitting on my couch, saying to myself, "Goddamn, this company might actually pull off a really good show right now."  The bell rings, Becky offers a handshake, Bianca shakes her hand, Becky sucker-punches her and hits a uranage suplex, and pins her to win the title.  25 seconds.  So this segment was a bait and switch on two levels.  First they advertised Sasha all the way up to the match start, then switched to Carmella, then Becky.  Then Becky sets the audience up for a great match and it goes two moves.  Fuck. This. Company.  They built up Bianca all year as a new top women's star only to have her get squashed like an absolute maroon.  This segment led to Becky's ill-conceived heel turn which saw her work against what the fans wanted her to be for a full year, before finally reverting to babyface.  Just a garbage segment on every level.
They followed up this drivel with another pointless match, as Drew McIntyre beat Jinder Mahal in four-and-a-half minutes.  On the second-biggest show of the year.  Why was this match here while Nakamura, Balor, Owens and Asuka were sitting at catering and Big E was relegated to the pre-show?  Absolute nothing match.
The RAW Women's Title match was a surprisingly strong outing, as all three worked hard and got their shit in.  Charlotte was oddly the crowd favorite by a mile here.  Rhea Ripley got off a German suplex on Charlotte, who had Nikki in a fallaway slam.  Charlotte got off a twisting moonsault to the outside that wiped out both women and knocked Nikki's head into the dasherboards.  Ripley got each of her opponents in her standing cloverleaf, but Charlotte reversed into a Figure Eight, which Nikki broke up with a top rope dive.  Nikki wiped Ripley out with a DDT but Charlotte got Nikki in the Figure Eight for the submission win and her 12th championship.  Because frequency of holding a title is more important to WWE than longevity.  This match was pretty good. 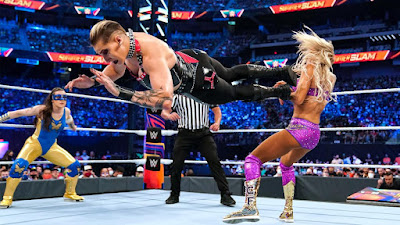 The match of the night, as expected given the lack of Belair vs. Banks, was Seth Rollins vs. Edge.  These two got 21 minutes and did a pretty standard WWE-style main event match that started slow and built to a strong peak.  They both did their usual spots for a while and Seth teased the Curb Stomp numerous times as the announcers sold the idea that such a move might end Edge's career.  Edge broke out his wife's finisher the Glam Slam, hit a spear through the ropes to the outside which looked great, and put Seth in the Edge-ucator (a sharpshooter variation I always liked).  Seth at one point countered a spear attempt into a Pedigree (shades of his 2016 match with Roman).  Edge finally caught Seth in a crossface but Seth refused to tap, then Edge smashed Seth's face into the mat repeatedly and changed the crossface into an arm trap choke hold for the submission win.  Very good match. 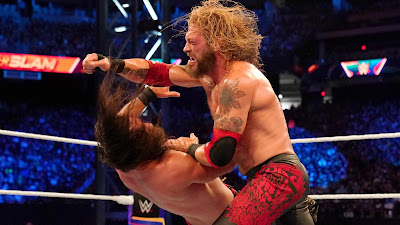 Next we got a pointless Miz-Morrison segment where they planned to unveil some water spraying apparatus, but it was revealed that Xavier Woods (dressed like Scott Hall) had stolen it, and he sprayed them with it.  Yes, recent WWE Champion The Miz was used as a buffoon in a comedy segment at SummerSlam.  Why was this on the show?
The WWE Championship was in the death spot, with Bobby Lashley and Goldberg actually starting to have a real match as opposed to the usual Goldberg finisher-fest.  Goldie did three moves outside his usual two-move wheelhouse, hitting a couple powerslams before spearing Lashley on the outside.  Then MVP hit Goldberg in the knee with his crutch and Goldberg's reaction was way delayed.  Lashley bashed Goldberg's knee into the post a few times, rendering him unable to stand, and the referee called the match.  The crowd hated this finish, and so did I.  This was all just to set up a rematch in Saudi Arabia.  Drivel.
The Universal Title match was another prototype WWE-style main event.  John Cena came out with a super-cool Super Mario 3-themed shirt which I kinda want.  The story at the beginning was Cena trying to steal a pinfall with rollups and the like, and taunting Reigns whenever he came close to getting a three-count.  Reigns then went on a tear, beating Cena down for several minutes.  This was the boring segment of the match, but Cena eventually made a comeback and the big move bonanza began.  Cena hit an AA through the announce table and later hit his top-rope version, but Roman kicked out of both pin attempts.  Cena went for a spear but Roman countered it, hit two Superman punches and a spear to retain the title.  After the bell Brock Lesnar made his return, now with a ponytail and lumberjack beard to set up the fifth Roman-Brock match, now with the babyface-heel roles reversed.  Alas though, they'd keep just wrestling the same two-move matches as before.  Anyway this was a very good main event. 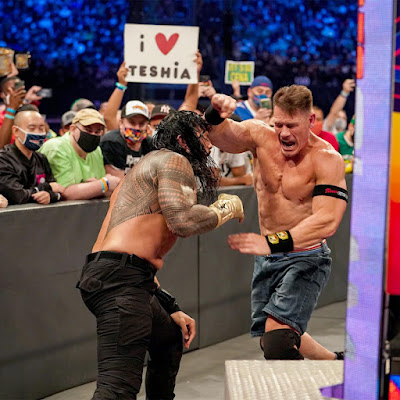 So by my count, of the ten matches six were good, three were pointless, and one was a goddamn slap in the face.  Remember when WWE PPVs were all but guaranteed to leave you satisfied at the end?  Good times....
Best Match: Seth Rollins vs. Edge
Worst Match: Alexa Bliss vs. Eva Marie was the worst actual match, but Bianca vs. Becky was the worst segment in the end.
What I'd Change: How about instead of bait and switching the Smackdown Women's Title match you announce Bianca vs. a mystery opponent, have Becky come out, and give them fifteen minutes to actually tear the house down?
Most Disappointing Match: Bianca vs. Becky.  There are no words to adequately describe what a rug-pull this was.
Most Pleasant Surprise: I guess the RAW Women's Title match.
Overall Rating: 7.5/10
Better than WrestleMania 37? - No
2020
2022
And that brings us to the present day.  I hope you've enjoyed our little jaunt down SummerSlam Memory Lane.

Anyway, before I go, let's take a look at the Top Ten SummerSlams in history, and the Top 20 SummerSlam matches, according to me.