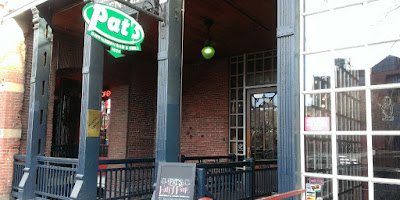 In my latest jaunt to a town I went to for really no reason but to drink, Denver was where I laid my weary liver for a few days to pound down some original Coors, the banquet beer. While checking out the downtown area and bar-hopping quite easily thanks to the free shuttle Denver provides, we happened upon Pat’s. A chalkboard sign outside let us know they had $5 pitchers of beer, so we ventured south down the stairs.


FUN FACTOR: A basement bar with a small bar area but a huge dining area with plenty of TVs and seating, Pat’s is a perfect dingy hole in which you can sit for hours and get drunk. Off to the side is a dartboard and a coupla pinball machines. BE WARNED: this is a Philly bar. I have no problem with Philly folk, but we showed up on a college football Saturday, when it was transformed into a Penn State bar. That immediately turned me off, as I can’t separate their football program from the Sandusky child-love incidents, so I was horribly biased against the fan base in there. Rooting for that team and university sickens me.  Thankfully, the Lions were getting blown out and the crowd dispersed. But it cast a shadow on my fun factor.

CAST OF REGULARS: As mentioned, they were Penn State fans, so they all sucked ("But Dan, you can’t impugn an entire group of people based on the acts of one person!"  FUCK YOU voice in my head, this is my column no one reads on the internet, I can do whatever I want). And for Christ’s sake Denver, WE GET IT, weed is legal. Holy SHIT that town reeks. Even worse in a basement bar. Everyone there was high. This is no exaggeration. The goddamn door man was high. When he asked for an ID, I showed him a bus pass. BOOM, I was in. Not being high around high regulars is not fun.

BEER CHOICES: TONS. They got your standard domestics, your microbrews, all kinds of beers to choose from. Plenty of infused booze for shots too, and I chose to partake in some sort of jalepeno vodka that was dynamite. This is the only category where they really hit the mark. Cheap booze, happy hours, tons of selection. They killed it in the getting drunk department.

OVERALL: Eh. It was all right. I got lit for barely any money but the place smelled like high school and the regulars were super annoying. I was wearing Pats gear, and there was this little stoner dude who made it his job to make sure he spoke loudly about BRADY CHEATS whenever I was near him. That doesn’t really bother me, but what do I say to the stoned guy who keeps yelling that?

ME: Hey stoner guy, did you know that On September 17, 2004, the league announced that, for the second time in three years, the Denver Broncos were fined nearly a million dollars and would once again lose their third-round draft pick because of salary cap violations between 1996 and 1998? (H/T to http://yourteamcheats.com/ for that info, great website)


I’d go back to the place if I was walking by and wanted a cheap beer. I wouldn’t search the place out for a good time with a crowd. Unless I wanted to score some sweet, dank kush.

Posted by Justin Enuffa Ballard at 9:46 AM