Last night's Backlash PPV reminded me a lot of the old In Your House shows from the mid 90s, where the company's roster was dangerously thin but they managed to slap together a nice little show.  The way it ebbed and flowed reminded me particularly of shows like Good Friends, Better Enemies in that it had a strong opener followed by an inoffensive throwaway, followed by a very strong singles match, followed by another inoffensive bout (or two), and culminating in a pretty great, crowd pleasing main event. 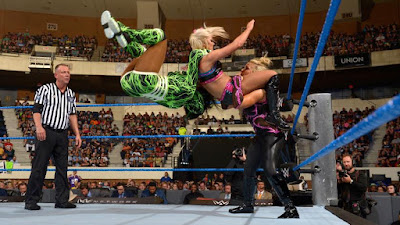 The Women's Six-Pack Challenge was a super way to kick off the show as it featured almost non-stop action with something important on the line.  Changing this to elimination rules was a great move since the purpose of the match was to crown an inaugural Smackdown Women's Champion; a one-fall format would've felt cheap.  I also liked that they were given plenty of time to tell a few different stories before any eliminations occurred.  Nikki Bella vs. Carmella seemed to be the main rivalry being spotlighted, which is fine.  I'm really diggin' Carmella as a heel.  She's no ring general, but her kinda trashy Long Island shtick works much better when she can be an entitled brat.  Naomi continues to impress and it was cool (and bittersweet) to see her break out Bryan Danielson's Cattle Mutilation finisher.  I'm not sure why Mauro Rinallo didn't call attention to it (Maybe it was because The Miz was gonna rip off a couple of Bryan's moves later on).  Putting the belt on Becky Lynch was the right move.  Becky's super over with multiple demographics and aside from Natalya she was the best worker in the match.  I hope the Becky vs. Natalya feud gets rekindled so the belt feels important and not overshadowed by Nikki vs. Carmella.  A fine start to the show that reminded me of a good Cruiserweight schmozz but with solid storytelling.

The Usos-Hype Bros match was next, and as I said it was inoffensive.  I'm still unsure why they wrote American Alpha out of this tournament.  I get that they're very new to main roster fans and you want to build them up before just slapping belts on them.  But with an already thin roster (and as it turns out a legit injury to one of your top stars), why would you book a kayfabe injury to your likely future top team at this point?  Anyway, this was fine. 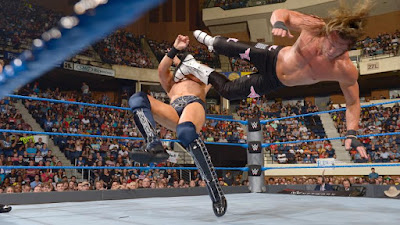 Next up was The Miz vs. Dolph Ziggler, in one of the best Intercontinental Title matches of the last decade or so.  We've seen these two fight ad nauseum but this time it seemed like both guys really wanted to elevate themselves and the Title.  The lack of roster depth actually helped in this situation because they were given a sprawling 18 minutes to make the match feel like a big deal.  The Miz gets a lot of flak for not being a good worker but I consider him at worst above average.  While he's not likely to ever deliver a five-star classic, The Miz has proven himself an excellent "listener" in the ring.  When he's in there with a superior grappler, Miz knows when to let the other guy lead and just be a good dance partner; he never gets in the way of the match excelling.  The fact that he's so good at being a dick heel certainly doesn't hurt either.  I'm really liking this Intercontinental reign and the decision-makers in WWE need to choose wisely when it's time for someone to finally dethrone him.  It's gotta be a babyface the fans strongly identify with, in whose journey they'll fully invest.  My pick at this point would be for Sami Zayn to jump to Smackdown (seems to me they're owed a pick anyway after the loss of Alberto Del Rio) and chase Miz for months, maybe beating him at WrestleMania next year.  Anyway, top-notch stuff from both Miz and Ziggles.

Randy Orton vs. Bray Wyatt was supposed to take place here but as we learned yesterday afternoon, Orton has not been cleared to return to action after having half his brains spilled onto the canvas by Brock Lesnar last month.  Yeah, good call booking that as a squash, fellas.  Maybe, just maybe, if you want to add blood to a big match, it might be prudent (not to mention SAFER) to just let the guys blade once in a while.  Explain how blading is too violent for a PG product but legitimately breaking a guy's face open is A-OK.  Anyway, Orton's replacement was the ever-irrelevant Kane, and he and Wyatt had a no-DQ match for no reason at all.  But to be fair it was pretty entertaining.  I especially liked the running senton spot on the announce table.  Of course the booking here was nonsensical - Orton eventually interfered, hitting Wyatt with an RKO and allowing Kane to win.  So, on this razor-thin roster that's in desperate need of more top guys, you booked Bray Wyatt, a guy in desperate need of some PPV wins, to lose to the 49-year-old Kane.  Makes sense.  Christ.

The Tag Team Tournament finals got the death spot as The Usos faced Heath Slater and Rhyno.  I should've known something was up here when The Usos beat the piss out of Slater almost the entire match before he made the hot tag to Rhyno, leading to a match-winning Gore for the straps.  Yup, the first-ever Smackdown Tag Champs are Heath Slater and Rhyno.  Well that's one way to go.  But the crowd liked this a lot.  Slater has managed to get himself over completely in spite of the company's best efforts, and they'd be wise to at least give him a chance here.  I have a feeling this was all just a way to get the free agent Slater "signed" to the Smackdown roster, and The Usos will take the belts off him and Rhyno very soon.  But it might make sense to build Slater up as an IC challenger.  You could certainly use every over guy you can find.

Again, considering how few real stars Smackdown has right now, this undercard was not bad at all.  And the main event solidified Backlash as a quality show. 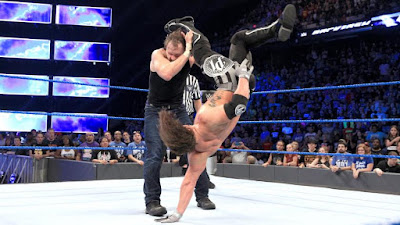 AJ and Ambrose put together a New Japan-ish match with a pretty methodical first half (featuring AJ dominating most of the action) that ramped up in pace and intensity as time wore on.  This was nowhere near as crazy as the AJ-Cena match last month, but it was easily a **** main event between two excellent workers, one of whom happens to be the best wrestler in the world right now.  AJ Styles holding the WWE Title over his head was such a surreal, amazing sight.  His run since leaving TNA has been Shawn Michaels-esque; after building a breathtaking body of work in his mid-20s and being more or less beaten into complacency by TNA's inept booking, Styles finally broke free in 2014 and added so many new layers to his game.  By honing his character work and creating an edgier aura, Styles has become a perfectly complete performer who has somehow improved on what was already an impossibly great resume.  In a few months the Wrestler of the Year conversation will begin again, and I can't imagine a valid argument for any WWE talent other than AJ Styles (Even including the NJPW roster that'd be a tough sell).  I could not be more delighted that WWE recognized after only a few months what a singular talent they have on their hands; Styles is in a class by himself right now and I can't wait to see where this Title run takes him.  The Smackdown brand is in good shape as long as AJ is the face of it. 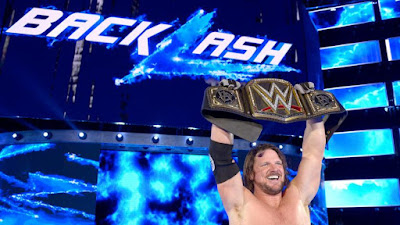 So that's where my head's at coming out of Backlash.  While it wasn't a blow-away PPV of the Year, it was a pretty damn enjoyable (and succinct) show considering how small their roster is right now.  They desperately need to move Zayn over and call up Samoa Joe to fill out the top of the card, but this show had three matches out of six I'd rate at ***1/2 or better, and nothing I'd call bad.  Not too shabby at all.  Smackdown still feels like the B-brand but they're headed in the right direction for the time being.

Best Match: Dean Ambrose vs. AJ Styles
Worst Match: The Usos vs. The Hype Bros
What I'd Change: I wouldn't have booked American Alpha to not be on the card, certainly
Most Disappointing Match: Bray Wyatt vs. Kane, since Kane ain't no Randy Orton
Most Pleasant Surprise: Bray Wyatt vs. Kane, since it wasn't a total stinker
Overall Rating: 7.5/10
Posted by Justin Enuffa Ballard at 12:46 PM