Whassup everybody?  My wife Kelly and I are back to review another local brewery.  This past weekend we took a little jaunt over to Mayflower Brewing Co. in Plymouth, MA for some local flavor.  In the past we'd sampled a few of their brews but overall neither of us has had too much familiarity with their products. 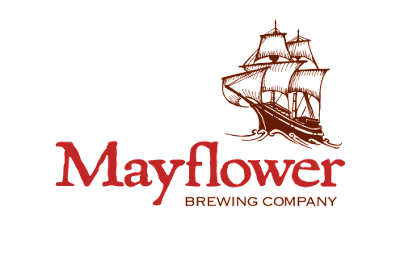 The tasting room is a nice little venue, with hardwood floors and attractive natural-grain shelving and bar/tables that give off an old-school tavern vibe.  The atmosphere was casual and inviting, and the bar staff were friendly and well-informed.  Two critiques if I may: the taproom seemed to have a fly problem, as there were a handful of them buzzing around our heads.  Might wanna get that looked at.  Also the pours were served in plastic, disposable cups instead of actual glasses, which for me hurt the beers' various aromas.  Instead of getting a noseful of booze I was smelling plastic.  Onto the beers.....

The options on tap were numerous, as were the configurations by which one could get said beers down one's gullet.  There are free sample flights, full tasting flights for $10, half-pints, full pints, and growler fill-ups at a reasonable price.  Kelly and I went with a full flight each.  We got 5 tastes to a flight, and the pours were quite generous at what appeared to be 6 oz. per taste.  The barkeep helpfully suggested that since there were nine beer choices and we'd get a combined ten, that we sample all nine flavors and save one empty cup for the end to finish things off with our favorite.  This idea was genius in its simplicity.  The nine choices were quite varied and ranged from light and crisp to dark and rich.  From light to dark, here's how it went down (Spoiler alert: it went down easy, like a hooker on prom night.....I dunno what that means).


Golden Ale (4.5% ABV, 17 IBU) - A light, slightly bitter, easy-to-drink session beer.  This had a pilsnery taste and while not a smash hit, was both light and a bit complex.

Priscilla Pilsner (6% ABV, 35 IBU) - Similar to the Golden but more crisp and delicate, and to me less bitter (Odd, considering its IBU is twice as high).  I preferred this over the Golden, but both were quite refreshing.

Pale Ale (5.1% ABV, 26 IBU) - This was very balanced and ever so slightly sweet in the finish.  I'm usually not a huge Pale Ale guy but this had a nice, subtle flavor.

Mosaic Session (5.5% ABV, IBU N/A) - This special brew saison was a little sour and had a strong hops flavor but wasn't overwhelmingly hoppy.  The aroma was stronger than the flavor.  Not too shabby at all.

IPA (6.3% ABV, 73 IBU) - IPA's have been all the rage for several years now, and while I've been hard-pressed to find one I'd kick out of bed, I'm also not really an IPA guy.  But Mayflower's version is thankfully not too hoppy, with malts that balance out the flavor, and kind of a bready, nutty finish.  As IPAs go, this is one of the better ones I've had.

Evolupulin (8% ABV, 51 IBU) - This double IPA is made with a revolving door of different hops varieties (hence the name), and was very bitter but not in that pleasantly hoppy kinda way.  The bitterness here was just a general aspirin-y vibe and the hops didn't come through for me.  This was my least favorite of the bunch.

Marzen (6.7% ABV, 24 IBU) - This traditional take on Octoberfest was strongly malty and less sweet than most beers of its type.  One of the better flavors of the day.

Hometown Brown Ale (5.7% ABV, 26 IBU) - Brown ales are traditionally not my favorite, but I liked this one a lot.  This boasted a strong coffee aroma and finish, and stood out in a way most brown ales don't.  Lotsa character in this one.

Porter (5.5% ABV, 34 IBU) - I've saved the best for last.  I'd had Mayflower's porter before and it still holds up.  I'm a huge stout/porter fan and this one was super smooth and robust without feeling heavy.  If you only purchase one Mayflower beer, go for the porter.

Fave is between the pale ale and the Priscilla - perfect for such a beautiful fall afternoon with the warm sun and cool breeze.  I like the English style of the Pale Ale much more than a typical American pale ale.  The malt helps take the kick away from the hops.  The brew-rista (Is that a word?) described their pale ale styles as "less aggressive," and I thought that was a perfect way to describe how I normally feel about pale ales.  Like, c'mon dude - get outta my face with ya hops.  Take it down a notch.  And grow up.


Well, thanks for reading.  Comment below if you're a Mayflower fan, and check back at Enuffa.com for more beer-related shenanigans!
Posted by Justin Enuffa Ballard at 9:53 AM