WE ARE BACK BABY! That’s right, me, Miggsy and B-Cuddy are back to bring you all the wrong picks for all the right games in this NFL season. My picks last year were…not so good.


New rule this year. We are each picking ONE GAME ONLY. That’s right, each week, you got a chance to go undefeated or be an ultimate loser. The stakes are higher, the waists are larger and the hairlines are exceedingly balder (Except mine. I have INSANE lettuce right now. It’s a goddamn salad bar on my head).

An away favorite in Week 1. I must be insane. Especially with the man Blake Bortles at the helm for the Jags. But let’s be real, Jacksonville has been grossly incompetent against good teams for the last decade it seems. In fact, against eventual playoff clubs in the last 17 games, they’ve covered just twice (#Research). Of those games, they’ve won NONE. So I’m putting all my Week 1 eggs into Aaron Rodgers' basket. The Packers should still be a powerhouse even though they just released their best O-lineman and their best WR is coming back from a torn ACL. Team has weapons upon weapons.

Y’all know me. Know how I earn a livin. I’ll bet this bird for you, but it ain’t gonna be easy. Bad fish (or something). Not like going down the packy playing Keno and scratch tickets. I’m talking about GAMBLING! You get the idea… 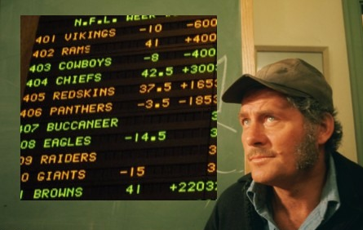 The start of football season is finally here. A gambler's delight. Each fall, the gambling man turns into a cock-eyed optimist. Dreaming of the thrill of victory and bundles of cash. And ignored is the fact that last season, Billy Mumphrey couldn’t knock out the rent for a few months because those parlays never hit. I’m so glad its back. What’s also back is this blog, where we three stooges make our picks. And so begins a new season of fat and hairline jokes. But unlike our waistlines, we’re trimming down this bullshit. Only picking one game a week. Thank Christ. Last season I proved Sinead O’Connor and Super Lettuce couldn’t compete picking 3 games a week. Not with 3 they can’t! This season will be no different. Just remember, Stiffs, YOU LOSE! GOOD DAY SIRS! I’m just kidding. I wish the best of luck to Miggsy and Augustus Gloop. On to the pick…

I really don’t like starting out the year by betting on a game that features both Dalton and Fitzpatrick. You don’t really know what to expect and its nervewracking. Like the first time you unfold the loaf in front of a girl. Just don’t know how it’s gonna play out. Moving on… I always look for home underdogs in Week 1. And I don’t think Cincy is good enough to be road favorites right out of the gate. Maybe if they were in Cleveland, but the Jets have talent. I think these teams are more even than anyone realizes. Cincy will finish with a better record, but that’s just because Cincy blows it in the playoffs, and the Jets blow it in the regular season. It’s just who they are. Also, Fitzpatrick typically self-combusts at the end of the year. So he’s got a few good games in him early. I’m grabbing the points.

Oh it's my favorite week of the football season, Week 1.

"How’s ya team doin, dude? Did they have a good camp? Who’d they draft, that monsta D-Lineman from Hahvid? He’s gunna be awesome, dude but we’re still gunna beat ya."

-Every Masshole on the planet

I honestly hate the first week of the NFL season, its an absolute crap shoot. Good teams fall off the map. Terrible teams suddenly figure it out. IT'S CHAOS. Picking a winner in Week 1 is like Danny and Brandon getting a “yes” from the first girl they asked to prom. It ain’t happening.

I’m looking forward to only picking one game a week this year. It’ll allow me more time to analyze each match up to ensure I give the best pick possible. I’m playing chess while they are playing checkers. So without further ado, my pick…

The Chiefs gotta have this division game at home. They come in relatively healthy. The only major name not on their 53-man roster is Jamaal Charles who’s rehabbing an ACL injury. His replacement down the stretch last season was the very capable Chakandrick West (sic). I have no idea how to spell his first name.

The charges have line issues. Plus, that god-loving persistent procreator, Phillip Rivers is still at the helm. I dislike him just as much as Danny likes him. He’s a hipster doofus.


The Chiefs haven’t lost to this guy in 3 years. I don’t see it happening on Sunday. Chargers 10, Chiefs 24.
Posted by Justin Enuffa Ballard at 3:20 PM