It’s time to talk about the most awkwardly titled event of New Japan’s year, Destruction in Hiroshima. This is probably the night I’m the most excited for, with Bullet Club being involved in all four major matches. Backing that is a competent undercard that contains the standard first-half fare, which could lead to Hiroshima to being the best of the three Destructions.

Four teams that all come together with an audible clunk for the opening match. With the Tag League coming up, and the Junior tag division possibly merging with the heavyweights, this will be a match used to exposit four of the filler teams of the tournament.

Another 8-man tag match used to get the crowd riled up. Expect residual heat to still be present between Fish and Shibata, and possibly a set up for the O’Reilly/Shibata match.

Landon’s Pick: Shibata, Nakanishi, Nagata and Tiger Mask IV
Justin’s Pick: Lotta great talent in this one and based on what happened in Tokyo it does look like they're setting up Shibata vs. O'Reilly.  Team Shibata wins.

Guerillas of Destiny vs. Roppongi Vice

Are you ready for a night of Bullet Club and CHAOS fighting? Too bad, you’re getting it. Starting out we have another indicator that the tag divisions are uniting, with hopefully an easy and statement-making win for Tama and Roa.

Landon’s Pick: Guerillas of Destiny
Justin’s Pick: I'm still unimpressed with Roa, but Tonga did alright for himself in G-1.  I can't see GoD going over though.  Roppongi Vice wins this.

Landon’s Pick: Ishii and Goto
Justin’s pick: I love the Ishii-Goto combination.  Keep building these two up as a Tag Title threat.

Probably going to end up about the same as the match in Tokyo. Only since BUSHI will be here, the White Meat Babyfaces have someone to take the fall. It still irritates me that EVIL pinned both Shibata and Elgin during the G-1, and gets nothing.

IWGP Tag Team Championship: The Briscoes vs. The Young Bucks 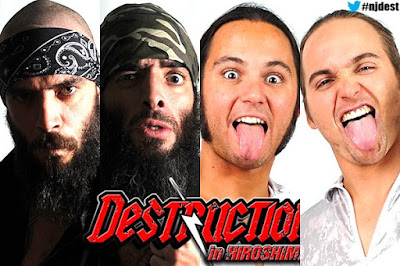 First of the big four on this night. And it’s time to ditch the Junior Tag Belts. No offense, but it’s the Jr. Tag division’s time to move on.

Landon’s Pick: The Young Bucks
Justin’s Pick: This might be my most anticipated match of the entire Destruction series.  On paper this is a potential MOTY candidate and should hopefully begin the process of merging the tag belts into one division.  This is a tough one to call, because it's still not clear if the belts are merging or if this is just a one-off.  If the belts are indeed merging, the Bucks are the obvious pick.  If this is just a case of NJPW dipping their toes in to see how the HW Champs match up with the Jr. Champs, I'd pick the Briscoes.  I guess I'll be hopeful and pick Matt & Nick to unify the straps. 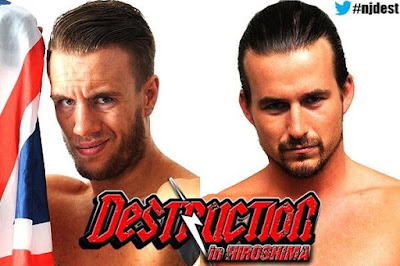 ADAM COLE IS IN JAPAN, BAYBAY! And it’ll be a great title defense to add to the Ring of Honor World Title’s lineage.  Cole and Ospereay will have a good match, but for the Title to change here would be ridiculous.

Landon’s Pick: Adam Cole
Justin’s Pick: This should be fantastic and it's great to see Ospreay getting this kind of spot.  No way in hell Cole loses the belt already, but the match will be something. 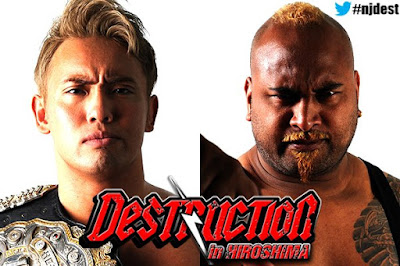 The stip here is if Fale wins he gets a title shot in New Zealand.  I’m pretty sure that’s the stipulation anyway. Otherwise there’s no point to this match. I really don’t feel like watching the New Japan equivalent of John Cena vs. The Big Show.

Landon’s Pick: Bad Luck Fale
Justin’s Pick: I've said it before, but I'm not sure why Fale keeps getting these prominent PPV matches with the top guys.  Rarely does he deliver anything above **1/2, and we've see this pairing a zillion times already.  If they were gonna do this match why isn't the Title on the line since Fale beat Okada in G-1?  I'll pick Okada here. 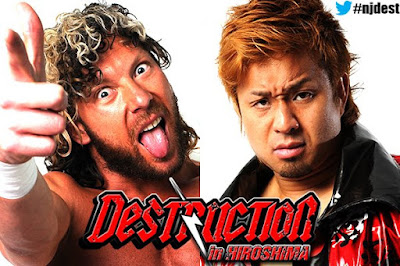 It’s nice to see YOSHI-HASHI being given a chance to show what he can do after being regulated to the CHAOS B crew for so long. However, the rise of Kenny Omega is too vital right now, despite how awesome a story YOSHI-HASHI and Okada would be story-wise leading up to January 4th.

Landon’s Pick: Kenny Omega
Justin’s Pick: Should be a fine main event.  Yoshi impressed me a lot during G-1 and Omega is pound-for-pound one of the finest in the world right now.  Omega obviously wins here.


I’m really excited for this show. It’s gonna really pick up post-intermission, and the results could send shockwaves along not only New Japan, but internationally. And then, we have Destruction in Kobe…
Posted by Justin Enuffa Ballard at 9:19 AM