Welcome to the official Enuffa.com Oscars recap!  Mike Drinan and I will break down the show a little and talk about what we liked, didn't like, what surprised us, etc.  Here we go....


Justin: So Mike, impressions about the 88th Oscars?


Mike: Overall, I thought it was a really good Oscars show. Chris Rock killed it as the host, there were surprises and upsets in the categories, and there wasn't much to make fun of at the end of the night. But let's start with the host. I loved how Chris Rock handled the role with all the controversy this Oscars contained. He didn't shy away from it, went right in head first and gave what I think is one of the best opening monologues in Oscar history. I loved his crack about the In Memoriam segment should be all the black people killed by police. Way to wake up the room to the controversy and connect it to events in the real world. But he also didn't seem to fully take a side either. He also took jabs at the boycott, Jada Pinkett Smith and Will Smith, which I can also appreciate. I also loved his sketches.  The Compton theater bit was fantastic and hilarious. I loved how he kept referring to Suge Knight, and the girl scout cookie sale was awesome. "Leo you made $30 million dollars so you better bring it!" So good. One of the best Oscar hosting jobs in a while.

Justin: Yeah I wasn't expecting to like Chris Rock much as a host - I've never been a huge fan of his - but he knocked it outta the park here.  Loved that he kept bringing it back to the controversy without pandering to either side of it.  It's a strange phenomenon but I've noticed over the years that the Oscar hosts I expect to love, like Neil Patrick Harris, Seth McFarlane, etc. end up pretty underwhelming, while Chris Rock, Ellen Degeneres and Whoopi Goldberg have all been fantastic.


Mike: Yeah, I agree. The common denominator is those three are career stand-up comics and I feel that person is best suited for hosting a show like the Oscars. They know how to play and handle the crowd in their own way. Unlike Anne Hathaway and James Franco....yikes.

Any winners/losers that pissed you off?


Justin: Franco was awful.  Deer in headlights.  Hathaway was clearly just trying to get through it while carrying Franco.  I really liked when David Letterman hosted 20 years ago.  Apparently I was in the minority.  One guy I always wanted to see host is Jim Carrey.

Nothing pissed me off per se, though I was bummed that George Miller didn't win.  Not surprised, just bummed.  Spotlight winning was truly a shock, although strangely when it came out I thought "I could see this winning Best Picture."  Like Argo it seemed like one of those "spoiler" pics the Academy loves.  But then The Revenant came out and took everyone by storm, so I figured that was a lock.


Mike: I wasn't upset at any of the winners. For the first time there wasn't a single winner who I thought didn't deserve it. I was shocked that Stallone lost even though I'm glad he did. When we gave our predictions I think I mentioned that he played the role of Rocky for 40 some-odd years and didn't deserve the nomination. I still feel that way. So when they gave it to Rylance for Bridge of Spies I kind of celebrated. When I saw Spotlight during Thanksgiving weekend, I walked out of the theater declaring it the Best Picture but, like you, The Revenant came out and I immediately looked at that film as the inevitable Best Picture. It got A LOT of attention and I figured it would carry it to the award but, then again, Hollywood loves its causes and Spotlight certainly had that. 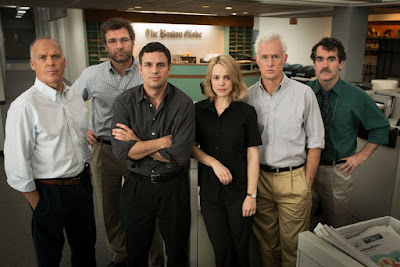 I've been having a change of heart with Inarritu winning Best Director. I've been talking to people I work with about the Oscars and you and I going back and forth and I think I agree with you that it should've been George Miller. I expected Inarritu but he already won it last year and Miller has paid his dues in the industry and made a fantastic film. I went into that movie thinking I wasn't going to like it and wound up loving it! Miller made a believer out of me and after sleeping on it, I think I would've preferred him over Inarritu.


Justin: I can't really comment intelligently on the Rylance win without seeing Bridge of Spies, but as we talked about during the show, the clip they used was simply baffling.  Literally nothing about those thirty seconds of screen time struck me as indicative of an Oscar-worthy performance.  So I dearly hope his actual performance is considerably better.  Stallone was a sentimental favorite (though I haven't seen Creed yet either), just because Rocky is such a beloved character.  I wouldn't have minded him winning.  Though my personal choice would've been Christian Bale, as he really disappeared into the character of Michael Burry.  Tom Hardy would've been another good choice since in my opinion he upstaged Leo in The Revenant.

While he wouldn't have been my choice, I can totally understand Inarritu winning a second time.  He's a uniquely gifted director who, with both Birdman and The Revenant gave us a very unusual take on pretty timeworn movie genres.  It just felt a little superfluous to give him a second award when Miller was so clearly deserving here.

That said, it was nice to see Mad Max walk away with more awards than any other movie, even if they were all technical.  I think that's the first time since the original Star Wars that a movie racked up more wins than anything else without any of them being "major" awards.


Mike: I'm glad that Leo finally got his award, even though we both agree his role in Wolf Of Wall Street was probably more deserving of the award. It is tough to see a great actor like Leo go so many years and give so many great performances and not have an Oscar to his name. This might be overstating it a little but it does feel as if a wrong has been corrected. I do hope he wins another win in his career. 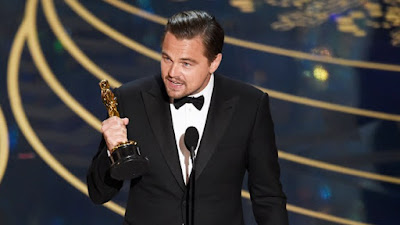 Okay, now on to my girl Brie Larson. I'm so happy she won for Best Actress and it was well deserved. I felt she was snubbed a couple of years ago when she didn't get nominated for Short Term 12. The reasons were understandable. She was a relative newcomer in the category and Short Term 12 is a small indie flick that the Academy doesn't usually pay attention to, historically speaking. I guess Meryl Streep getting nominated for August: Osage County just rubbed a little salt in my wound. In a small way though I'm glad she didn't get nominated for Short Term 12 because she came back stronger with Room. Such a great performance. The way she moved from mother to victim to bratty child and then to a confused woman trying to re-assimilate herself into the world was uncanny. I read in an article today this award could do wonders for her career the way being nominated for Winter's Bone boosted Jennifer Lawrence's career. I'm interested in seeing her upcoming projects and hope she continues going down this path of great performances. We'll see.

Speaking of Room, how great was Jacob Tremblay when he co-presented the award and told Chris Rock that he liked him in Madagascar? That kid is freaking adorable.


Justin: I get the Leo thing, but on the other hand it's hardly the most criminal case of a great actor never winning.  Gary Oldman has only ever been nominated for an Oscar ONCE, and it was for a pretty underwhelming performance at that.  But at least I don't have to see any more Facebook memes about this situation.

Brie was fantastic and this was a case of the award going to exactly the right person.  Usually there's at least one of those.  I hope this does open more doors for her as she should have a long, storied career ahead. 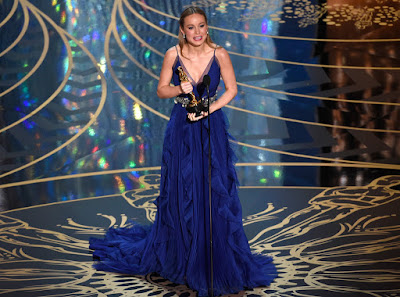 Jacob Tremblay by the way probably should've gotten a nomination as well.  I know the kid's only nine but his performance was right up there with Brie's.  One of the most natural, real performances I've ever seen from a child actor.  Where was he when they were casting The Phantom Menace???


Mike: Oh man the Leo memes were brutal! I'm glad we can put those to bed finally. You're right about him not getting an Oscar isn't the biggest snub. Oldman is a fantastic example. If anything his performance as Oswald in JFK was absolutely stunning. Talk about enveloping yourself in a character.

Jacob should've gotten a nomination as well. Probably in place of Stallone would've been just fine with me. I don't think even he could've saved Phantom Menace. So many things wrong with that movie.


Justin: Well to recap, you went 8/10, I only went 5/10 (though to be fair a couple of my differing picks were just to keep it interesting).

Overall a fun Oscars ceremony, even if we weren't totally happy with the winners.  But at least there wasn't anything offensive.  Oh, except for Sam Smith beating Lady Gaga for Best Song.  What the hell was that?  In answer to your earlier question, that was the one award that pissed me off.


Mike: How did I forget about that!?!?!?!? Awful. Just awful. The Oscars followed the Grammys in dropping the ball on recognizing a culturally important song because voters didn't recognize the movie it was in. For shame.

But yes, a good Oscar show that left little to complain about.


And that'll about wrap it up - thanks for reading!  Comment below with some of your Oscar thoughts!
Posted by Justin Enuffa Ballard at 6:13 PM