We’re one week out from Takeover: The End (Yes really), and the go-home show is the last chance to convince us that the event will be awesome. Before I begin, I want to apologize for missing last week, but I can give a very brief synopsis here:


The Revival comes out to hype up that they’ll be the first ever 2-time tag champs. For some reason, Ciampa and Gargano came out to confront the Revival, telling them that American Alpha is definitively better, and that the indy darlings are better too. Dash called them undersized, and “good hands”, which Ciampa threw back at the Revival themselves. The exchange continued, until The Revival started to leave, before being called back into a fight. Gargano is so ridiculously over that I can’t really believe it. That, or they just really like chanting Johnny Wrestling.


Shinsuke was interviewed, and said one sentence. Between his disposition, and how awesome his facial features are, he is absolutely stellar in his role.

Austin Aries will be going up against Elias Sampson later tonight.


Tye Dillinger defeated Buddy Murphy in a surprisingly entertaining match. Im glad that they found Murphy’s first name somewhere in storage, probably next to Alexander, Adrian, and Wesley. Dillenger was the face for this match, and really fit well into the role. He’s legitimately as smooth and quick as Gable is, with the only drawback being that Chad’s charisma is through the roof. Murphy was unremarkable, but certainly not bad. Tye eventually won with a Roode Bomb (fireman’s carry kneedrop neckbreaker.) 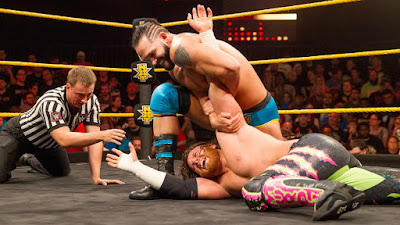 **1/4 for a good showcase of both men’s ability, Tye’s to wow the crowd, and Murphy’s to get the heat and hold his own.


There was a segment with Joe and Finn meeting with Corey Graves before their cage match next week. The intensity was great and the two men answered all of Corey’s questions the way they should have. Finn was intense in a desperate sense, while Joe seemed almost lax in his confidence, but still gave off this air of superiority in all his words. I can’t wait for the cage match next week.


Austin Aries defeated Elias Sampson in what boiled down to a basic match. Elias Sampson is dying a death already in NXT, lord help him if they ever bring him up to the main roster. Aries used the Last Chancery to make Elias submit, which brought joy to my heart. Hence, for this and Aries’ new cape, I gave the match **. 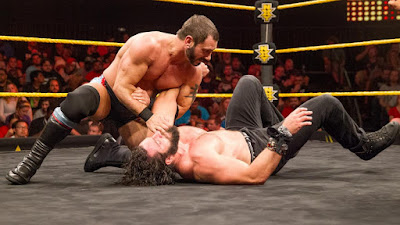 Aries talked about how he’s gonna beat Shinsuke. The match is gonna be great.


We’re gonna see Asuka and Nia Jax signing the contract for their match next week tonight.
There was another hype video for Andrade “Cien” Almas, the former La Sombra, who should be debuting at The End. I wonder if they’ll mention his former Intercontinental title run.


GarCiampa/Chiamgano defeated The Revival for some unknown reason. I still don’t know why they’re a team when they could both be used a lot better as individuals. The Revival remains a well-oiled, fully functional heel tag team, and I could watch them every week. Two great spots came up towards the end, when Dawson faked a swing to get Gargano to duck, just to set him up for a sick looking DDT. The finish came when Dawson Superplexed Gargano, but Gargano turned the impact into a small package for the pinfall. Think the finish from Steamboat/Savage, only with a suplex from the top rope. Awesome spot.

**1/2, with a beatdown from the Revival right after the match. American Alpha came out for the save, keeping them in mind for next week.


Contract signing for the Women’s Championship went about as well as many contract signings go in wrestling. Both women came out in pant suits (I think) and clean up really well. Nia gave her usual “I will break you” schtick before signing. Asuka said she talked too much, then yelled something in Spanish, again I think. “If you’re not scared of me, you should be.” After Asuka signed a fight broke out between the two, ending with Nia powerbombing Asuka in the middle of the ring. This is the most perfect go-home show I’ve seen in a long time. Every feud was accentuated, everyone looked good coming in, and there was a lot of hype around all three title matches. Can’t wait for next week.